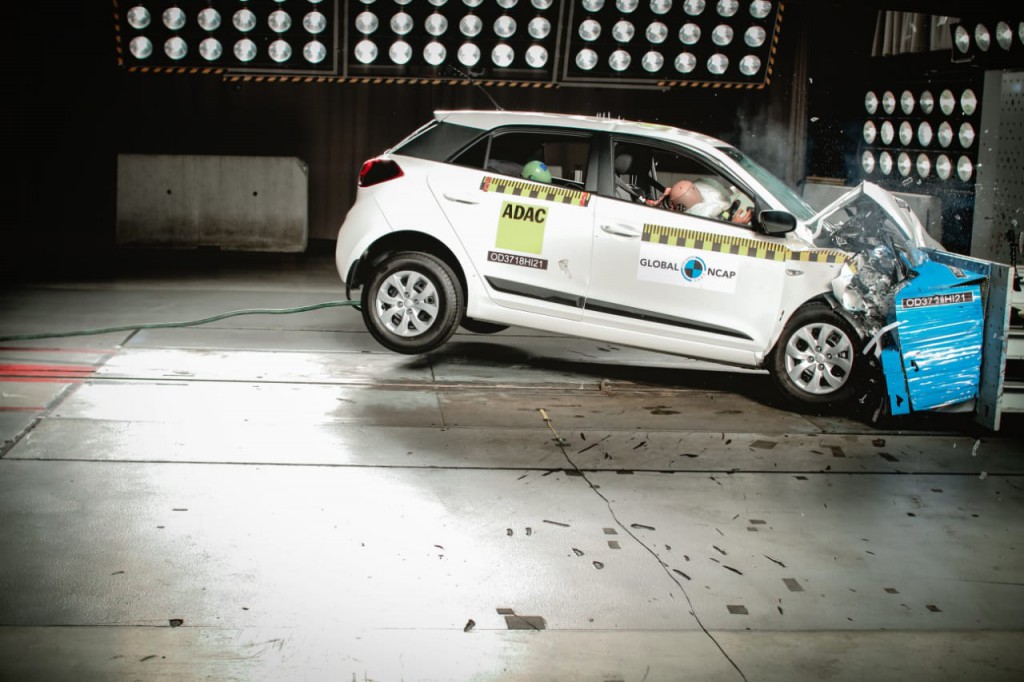 Global NCAP recently tested a made-in-India Hyundai i20 under the safer cars for Africa Campaign and the hatchback received a three-star rating. The European version of i20 got a full five-star rating from EURO NCAP but the model manufactured for Africa is different as it also misses out on some safety features.

The entry model with dual airbags was used for testing and Global NCAP conducted front impact crash test at 64 km/h. The i20 scored three stars for adult occupant safety with a total score of 10.15 out of 17 and just two stars for child occupant safety with 18.16 score out of 49, which is considerably lower than some of the competitors.

The bodyshell of i20 was rated unstable as it won’t be capable of withstanding further loadings. The driver and passengers head got good protection but the chest of driver got only marginal protection. The passenger and driver knee got marginal protection as they could impact with dangerous structure behind the dashboard supported by the tranfascia tube.

One of the reasons for low score for child occupant safety is that the ISOFIX child mounts don’t come as standard on the hatchback. The child seat for 18-month-old was installed rearward facing using the adult seatbelt and the protection offered for head and chest was really good but the seat for 3-year-old was installed forward facing.

The three-pointed seatbelt didn’t offer adequate protection for 3-year-old and excessive forward movement exposing the head to risks during the test. Earlier this year, Maruti Suzuki Baleno was also tested and the hatchback scored three-star ratings in the crash test.

In India, the Elite i20 is available in both petrol and diesel engines as the 1.2 L Kappa unit produces 82 hp of power and 115 Nm of torque. The 1.4 L CRDi engine puts out 89 hp and 220 Nm. Both these engines are mated to the manual transmission as standard and the automatic gearbox is available only with the petrol engine. The Elite i20 is one of the best selling premium hatchbacks in the country.