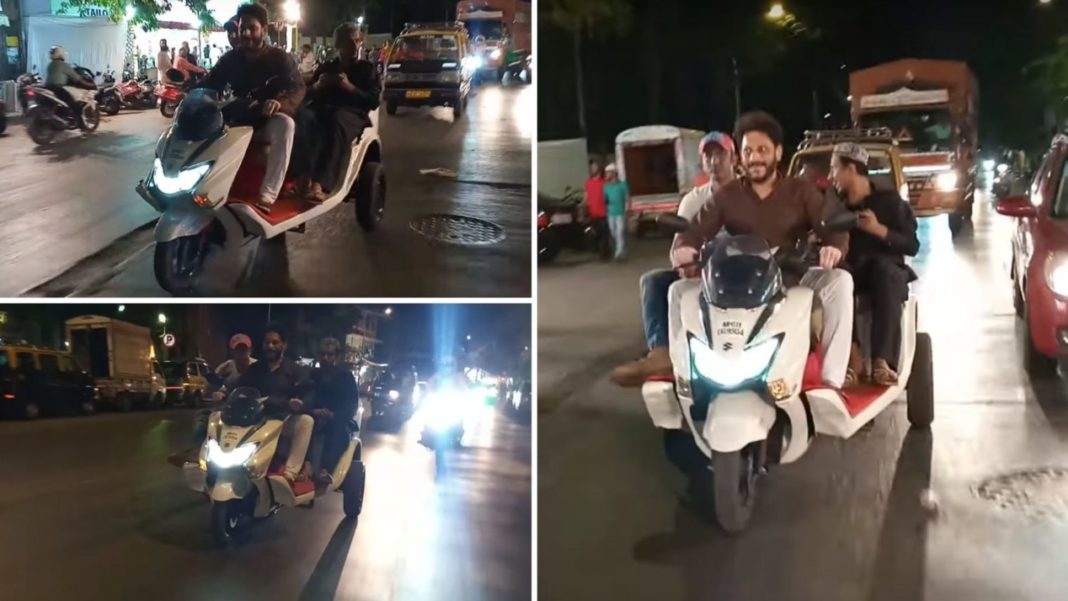 Suzuki Burgman is a good looking scooter and gets a very aggressive design, Here is an extremely modified version of the automatic scooter on video

Member of Legislative Assembly from Mumbai, Waris Pathan, was spotted riding India’s first trike scooter based on the Suzuki Burgman on the streets of Mumbai. The heavily modified scooter was caught on the video when Waris Pathan was riding on it during the Ramadan celebrations recently.

The two-seater Suzuki Burgman has been modified heavily and is now is three-seater. Everything in the scooter’s structure from behind the apron has been changed completely. The video shows the modified scooter from the front, side and the rear but not for long. The video shows the front of the Suzuki Burgman as stock but the part behind that is all modified. From the floorboard to the rear, the whole body has been upgraded.

A bench-styled seat has been added in the rear, which can make two people sit on it. The rear of the scooter gets a broad design and the stock panels have been replaced with aftermarket ones. The Burgman now looks like a chariot. The seat of the rider is now in the form of a stool while the rear passengers are sitting on the wide sofa-styled seat.

Adding such modification to the scooter puts extra stress on the engine and over prolonged uses, the engine can get seized too. The stock Suzuki Burgman is powered by a 124cc, liquid-cooled engine that generates a maximum power of 8.6 Bhp and peak torque of 10.2 Nm. It gets a CVT automatic transmission. Such modified scooters are banned in India and can get seized if spotted on public roads by a cop.