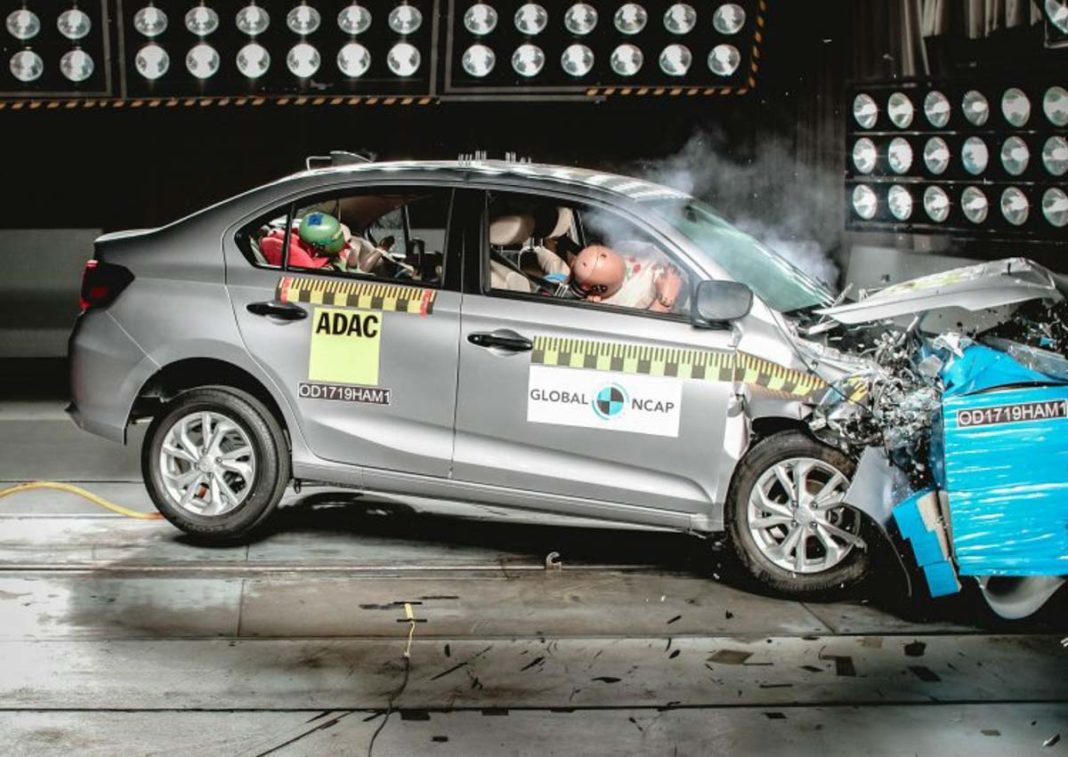 The locally made Honda Amaze has received a brilliant result in the Global NCAP crash tests and under the Safer Cars for Africa campaign it has certainly impressed. In recent times, we have seen the made-in-India cars achieving phenomenal ratings including the first five-star rated locally produced SUV, the Tata Nexon, and the four-star MPV, the Mahindra Marazzo.

Honda revealed the second generation Amaze back in Auto Expo 2018 before officially making it available for customers in May and it definitely played a big role in the brand’s sales tally last financial year. Continuing to be the best-selling model for Honda monthly in India, the Amaze is manufactured exclusively at the Tapukara plant in Rajasthan.

The Amaze was evaluated under several circumstances before being given 14.09 points out of 17.00 in adult safety. Child safety protection category was a let down though as Amaze managed only 8.16 points out of 49 that ultimately led to a single star. The child test dummies of 18-month and 3-year old were prone to get injured in the Global NCAP tests.

The test vehicle in African specification had dual front airbags, driver seatbelt reminder and front seatbelt pre-tensioners as standard. It is worth noting that the India-spec version betters it with the addition of seatbelt reminder for driver and front passenger, high-speed warning system, reverse parking sensors, etc.

In India, the Amaze competes against Maruti Suzuki Dzire, Hyundai Xcent, Tata Tigor, Ford Aspire and Volkswagen Ameo and it derives power from a 1.2-litre i-VTEC petrol and 1.5-litre i-DTEC diesel engines. The former is good enough to produce a maximum power output of 90 PS and 110 Nm and is mated to either a five-speed manual or a CVT.

The latter develops 100 PS and 200 Nm in the five-speed version while the CVT is capable of pumping out 80 PS and 160 Nm. The latest generation Amaze was subjected to a major overhaul with a plethora of exterior and interior changes, and they do pay them in dividends with consistent monthly sales in the highly competitive segment.