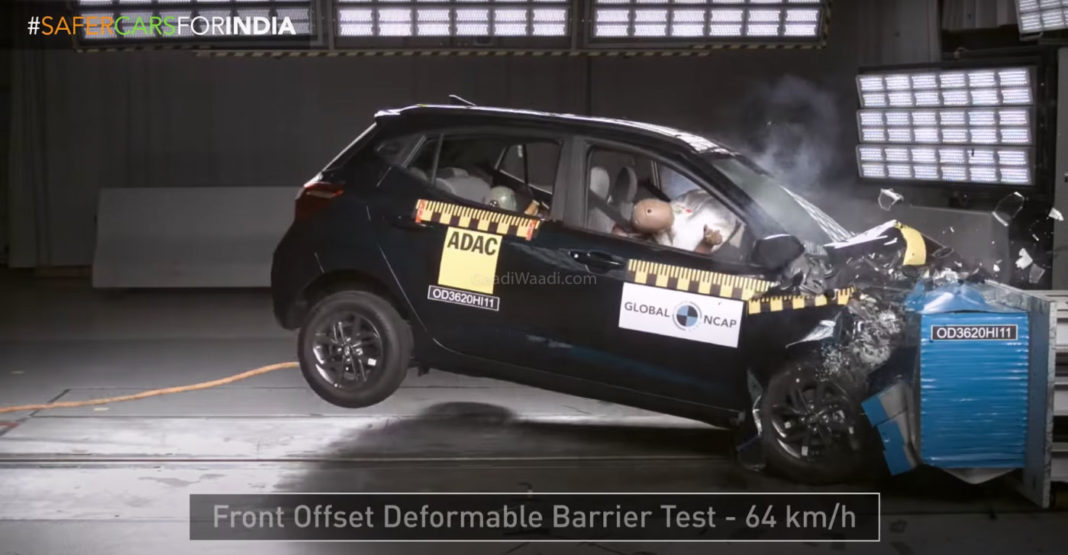 The Hyundai Grand i10 Nios rivals the likes of the Ford Figo, Tata Tiago and Maruti Suzuki Swift in India, and is currently priced from Rs 5.12 lakh to Rs 8.35 lakh (ex-showroom)

In its latest round of tests under the #SaferCarsForIndia campaign, Global NCAP has performed crash tests on a few cars sold in the Indian market, and one of these cars is the Hyundai Grand i10 Nios, that was launched in the country last year as a replacement for the Grand i10.

The car used by Global NCAP for this test seems to be the Sportz variant of the Grand i10 Nios, which comes which comes equipped with a range of safety features like dual frontal airbags, ABS with EBD, rear parking sensors, Emergency Stop Signal and a reverse parking camera as well.

Hyundai currently offers the Grand i10 Nios with two petrol powertrains, including a 1.2-litre naturally aspirated unit that puts out 83 PS and 114 Nm, as well as a 1.0-litre TGDi turbo petrol motor that generates 100 PS power and 172 Nm torque. A 5-speed manual gearbox is standard, while the 1.2-litre petrol engine can also be had with an AMT.

Additionally, the car can also be had with a 1.2-litre oil burner that churns out 75 PS of max power and 190 Nm of peak torque, and can be had with either a 5-speed MT, or an optional AMT. Hyundai currently retails the Grand i10 Nios between Rs 5.12 – 8.35 lakh (ex-showroom).