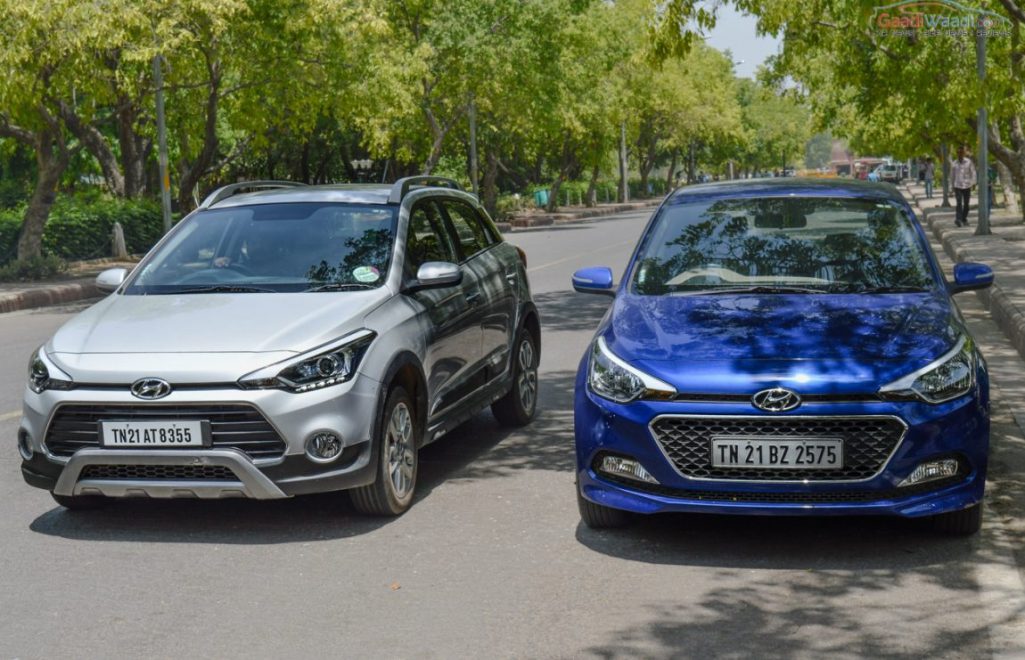 Following the lines of the Santro and the i10, the slightly upmarket previous generation i20 hatchback came into the Indian market having all the ingredients to be a successful product. It did so for several years in the subcompact B segment before making way for a thoroughly revamped version, known in India as Elite i20. The premium hatchback space has boomed endowing a new lease of blood due to the arrival of Elite i20 and since then it has dominated the segment for nearly the last two years. Based on a new design philosophy, Hyundai did see the potential in a crossover based on the Elite i20 which spawned the i20 Active.

Despite having some crossovers based on the premium hatchbacks as rivals, the Active i20 has replicated a good turn of sales as its sibling. It’s a part-hatchback and part-SUV with a raised ground clearance and added space. Here we compare both the Elite i20 and i20 Active and give a detailed differences and similarities between them:

Hyundai Elite i20 vs Active i20 Exterior: The Hyundai Elite i20 has the look of an European compact hatchback and that’s a big plus. Based on the Fluidic Sculpture 2.0 design language, the Elite i20 is a complete overhaul from its predecessor. The overall package resembles the international Hyundai products and it underlines the South Korean brand’s commitment to India. The front end is muscular with plenty of attention-to-detail styling.

The highlighting element is the signature hexagonal front grille with thin horizontal strip meeting the LED projector headlamps added as an MY2016 upgrade. The wider stance substantiates the sporty appeal of the car while the rear profile has sleek boomerang shaped tail lamps. It has wrap-around windows and aggressive front and rear bumpers besides C-pillar receiving darker treatment and the roofline is sloping with an angular rear section.

The Hyundai i20 Active depends on the Elite i20 as a whole except for some changes made to position it as a crossover. To make it beefier, up front the Active was given a new bumper with enlarged foglamps, all-new skid plate and projector headlamps with LED DRLs. The rear profile manages to get a new identity with the silver skid plate and bumper with circular reflectors. The crossover sits on large 16-inch alloy wheels and has plastic cladding all around with the roof rails and spoiler bringing an imposing road presence over the standard i20.

Hyundai Elite i20 vs Active i20 Dimensions: Meanwhile, the i20 Active crossover measures 10 mm longer at 3,995 mm, 26 mm wider at 1,760 mm, 50 mm taller at 1,555 mm and 20 mm more ground clearance at 190 mm when compared to the hatchback counterpart. However, the wheelbase, fuel tank capacity and cargo space remains identical as the Elite i20.

Hyundai Elite i20 vs Active i20 Interior and Features: The interior of the Elite i20 comes adorned with a beige and black colour combination with silver and metal embellishments in parts of the cabin. The centre console angles towards the driver and the leather-wrapped sporty steering wheel enhances the ease of handling as it can be held well. The Elite i20 has the benchmark build quality even after the launch of Maruti Suzuki Baleno. Rear occupants get a dedicated HVAC vent as well. To improve the safety quotient, the i20 is being offered with dual airbags as standard across all variants starting with the Era trim to the Asta (o). You will also get for ABS with EBD and a Smart pedal system. Whatever being offered in the Elite i20, you could find in the equipment list of the Active crossover as the interiors and component sharing have been extensive.

The increased height and wheelbase have allowed designers to create more room on the i20 Active as the legroom and headroom were upped at the front and rear. However, some notable changes are the option of Aqua Blue interior or Black interior with Tangerine Orange inserts and the seats have new covers. Both the models despite positioned in two different segments get power from the same 1.2 Kappa petrol and 1.4 U II 6 diesel. The petrol, dual VTVT, 16V, inline, four-cylinder, motor produces a maximum power of 82 bhp at 6,000 rpm and 115 Nm of pea torque at 4,000 rpm. It gets mated to a five-speed manual transmission driving the front wheels. The 1.4-litre turbocharged diesel mill pumps out 89 bhp at 4,000 rpm and 220 Nm of torque at 1,500 rpm. It is coupled with a six-speed manual gearbox sending power to the front axle. As the i20 Active being a crossover as well, the petrol and diesel engines’ low and mid-range torque delivery has been improved by six and eleven per cent respectively. The Elite i20 with comparatively lesser kerb weight has petrol mileage of 18.6 kmpl and a credible 22.54 kmpl for the diesel. An AMT version of the Elite i20 is expected to be introduced soon this year. The Active is ARAI-certified to return 17.19 kmpl for petrol and 21.19 kmpl for diesel. Both the vehicles ride on front McPherson strut with coil spring and coupled torsion beam axle with coil spring rear suspension.

Hyundai Elite i20 vs Active i20 Price:

Understandably, the i20 Active crossover is more expensive than its hatchback brother. The Hyundai Elite i20 is being offered in four variants namely Era, Magna, Sportz and Asta. The prices for each trim have been listed below (ex-showroom, Delhi).

Hyundai Elite i20 vs Active i20 Verdict: Following the introduction of AVN system on the i20 Active, the crossover offers pretty much the second-generation i20 hatchback does. Despite the popularity of Elite i20 in the premium hatchback segment, with arguably the best styling package and consistently registering more than 10,000 units a months by being resilient against Maruti Suzui Baleno in the fight for supremacy, the i20 Active offers more in terms of practicality and riding versatility.

The crossover can be taken soft-roading courtesy of the high ground clearance and it has skid plates, body cladding and tuned suspension to make you experience the one-off adventure ride over the weekends. For a vehicle of such calibre, the urban, city commuting and driving through congested traffics have also been made easy as well. That proves its adaptiveness wasn’t it?