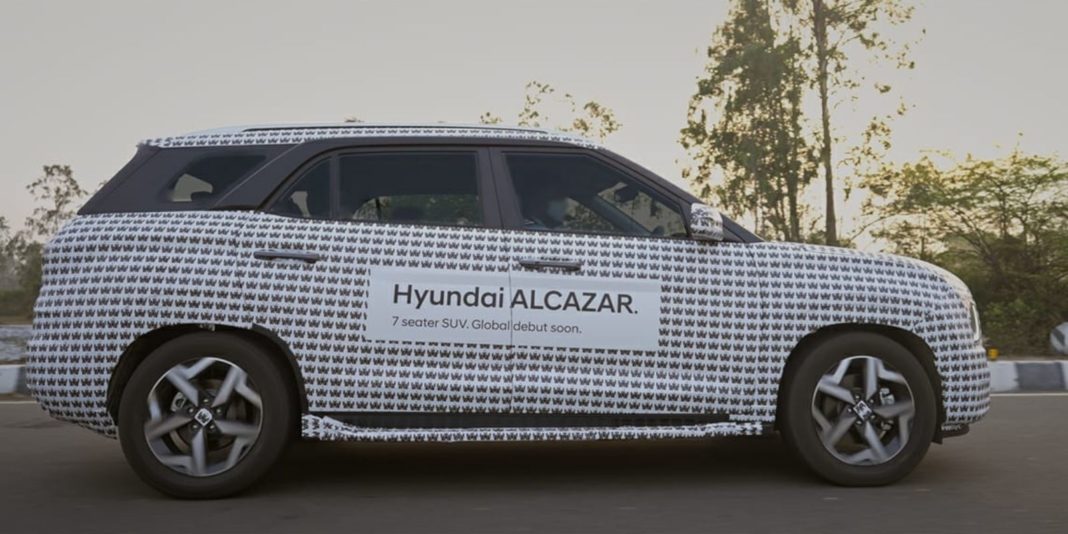 Hyundai Alcazar will go on sale in the coming months and it has changes behind the B-pillar to accommodate the third-row seating arrangement; powertrain options similar to the Creta

Hyundai Motor India Limited (HMIL) has given a sneak peek of its upcoming seven-seater SUV dubbed the Alcazar ahead of its global debut and it will go on sale by the middle of this year in India. Wearing a unique castle themed camouflage, Hyundai says the three-row SUV has been tested over “varying terrains such as rough roads, fast paced highways and hilly terrain.”

The South Korean auto major has said that it has surpassed challenging weather conditions “to ensure this fortress is built to last”. The castle themed camo is stated to exemplify castles and palaces. The teaser video shows the presence of diamond cut 17-inch alloy wheels, LED headlamps and unique C-pillar to accommodate the third row seating arrangement.

The Hyundai Alcazar will be offered as either a six-seater with middle row captain seating arrangement or a seven-seater upon arrival. The interior of the premium SUV will undergo trim updates and perhaps a new theme could be given while the features list could gain new equipment as well.

As for the performance, the three-row SUV could be offered with a 1.5-litre four-cylinder petrol, a 1.5-litre turbo diesel and a 1.4-litre turbo petrol engine as in its five-seater siblings. The solo diesel could pump out 115 PS maximum power and 250 Nm while the regular petrol kicks out 115 PS and 144 Nm.