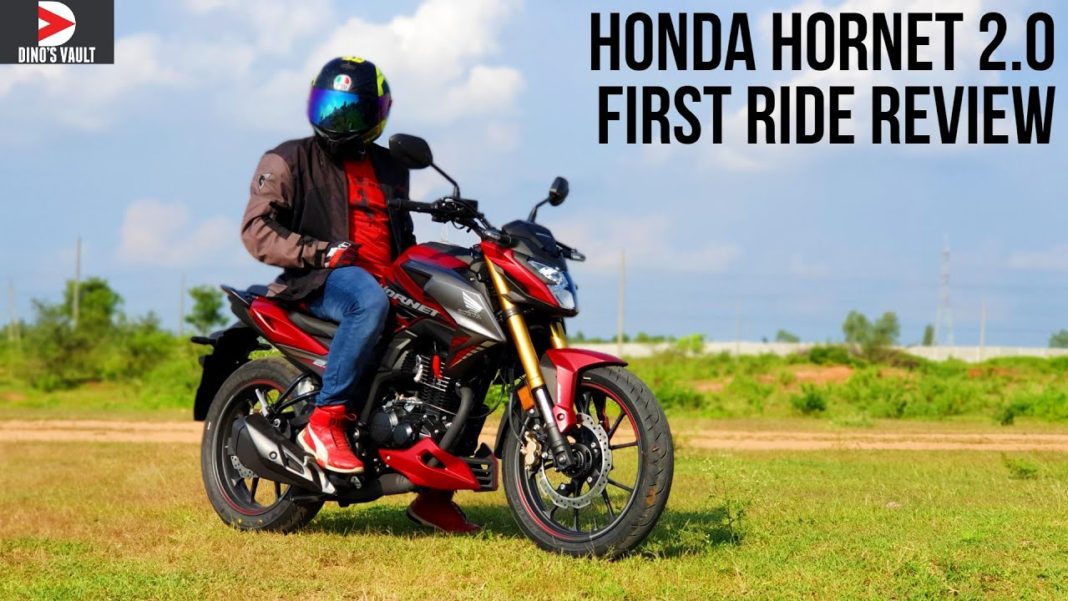 Honda recently launched the Hornet 2.0 and it raised eyebrows for its market positioning and the steep price tag of Rs. 1.26 lakh (ex-showroom). Replacing the Hornet 160R, the Hornet 2.0 is slotted between the 180 and 200 cc naked motorcycles and it uses the same 184.4 cc single-cylinder air-cooled fuel-injected engine meeting BSVI emission standards seen in the CBF190R sold abroad.

The powertrain develops a maximum power output of 17.26 PS at 8,500 rpm and 16.1 Nm of peak torque delivered at 6,000 rpm. It is paired with a five-speed transmission. We showed you images of the Hornet 2.0 reaching dealerships recently as well. The Japanese manufacturer claims that the HET PGM-FI engine has best-in-class torque and it will provide class-best mid-range performance.

The Hornet 2.0 is the first motorcycle in its intended space to come equipped with a gold coloured upside down front fork setup and how does it impact the comfort and riding factor? The first ride review posted by Dino’s Vault youtube channel will give you some answers. The Hornet 2.0 tips the weighing scale at 142 kilograms and it has an all-LED lighting system.

The X-shaped LED tail lamp resembles that of its predecessor and it uses 270 mm front and 220 mm rear pedal discs with a single-channel ABS system. It rides on Maxxis tyres with 110/70 R17 front and 140/70 R17 rear rubber. Dino says the powertrain gives good acceleration in the low range and it should help in everyday traffic situations.

The mid-range torque is also said to enable overtakes in tight spaces but the top-end characteristics were not given a praise. In his top speed run, the popular motovlogger/reviewer hit 125 kmph and surprisingly the dual throttle cable is said to give quicker acceleration. He also said cruising at speeds between 90 kmph and 95 kmph is rather enjoyable.

The refined engine has minimalistic vibrations according to him while the seats are on the firmer side. The dual-channel ABS system should have been part of the package though for enhanced braking. The Hornet 2.0 naked streetfighter has a seat height of 790 mm.