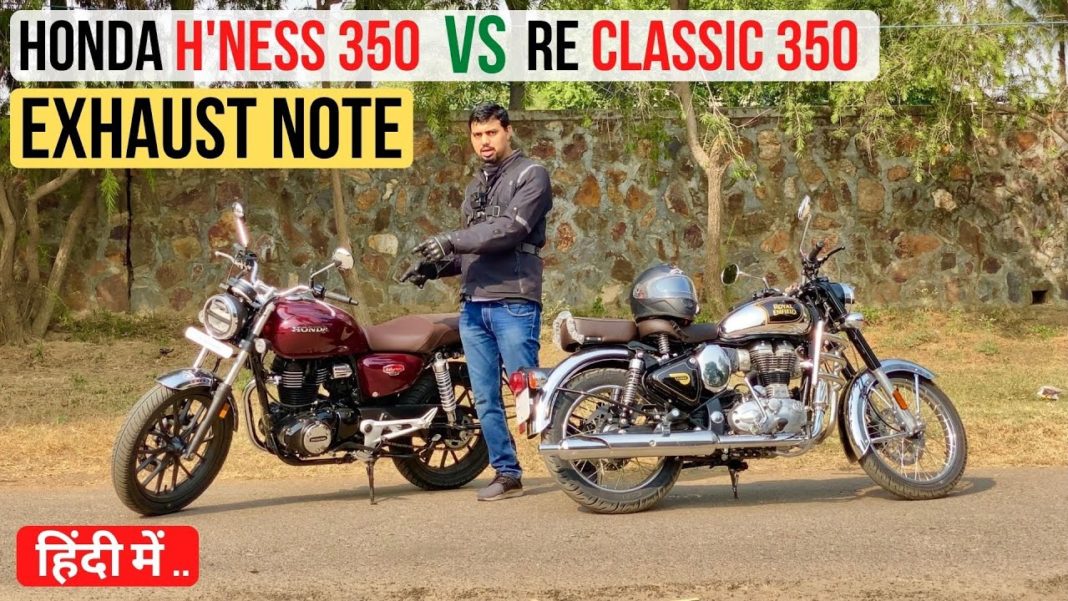 Here, we compare the new Honda Highness and the Royal Enfield Classic to know if the former’s exhaust sound is as impressive as the latter

Honda has recently ventured into the retro-themed motorcycle segment in India with the Highness CB350, and is trying to steal Royal Enfield’s thunder, or should we say ‘thump’. The Honda has plenty of advantages over the Classic 350, like an LED headlamp, smartphone connectivity (via Bluetooth), semi-digital instrument console (with turn-by-navigation), and standard alloy wheels. However, we all know that fans of the genre crave for one thing – the thumpy exhaust note.

Royal Enfield is known for its single-cylinder engines, which generate the signature ‘thump’. Its other rivals (Jawa and Benelli Imperiale 400) don’t have that, and sound like regular modern motorcycles instead. Honda, however, has played it smart and has engineered the H’ness to have a Royal Enfield-style exhaust note.

With this, Honda is hoping to appeal to fans of Royal Enfield as well. If you’re wondering how the exhaust notes of the RE Classic and Honda H’ness compare with each other, then watch the video below. Here, we have compared the sound of these two motorcycles side by side.

The video begins with the Royal Enfield Classic, which has quite a subdued sound. The latest (BS6) model isn’t as loud as the older BS4 or BS3 models. The bike also has a lot of vibrations, especially at higher RPMs. The Classic 350 is powered by a 346 cc, single-cylinder, air-cooled engine, which generates 19.36 PS and 28 Nm.

The Honda Highness, on the other hand, is much louder. The thump can be heard more at lower RPMs, but the sound turns more mechanical towards the top of the rev-range. That said, the engine itself is extremely quiet, and the sound seems to only originate from the exhaust. However, compared to the RE, the Honda has minimal vibrations.

The H’ness has a 348.63cc, single-pot, air-cooled motor, capable of pushing out 21 PS and 30 Nm. The Honda is more powerful than the RE, has lesser vibrations, and a loud sound which suits the retro-inspired styling. Overall, we’d say that the Highness CB350 is more impressive than the Classic 350. The H’ness is more expensive too, priced from Rs. 1.85 lakh to Rs. 1.90 lakh, whereas the Royal Enfield Classic costs between Rs. 1.61 lakh to Rs. 1.86 lakh.