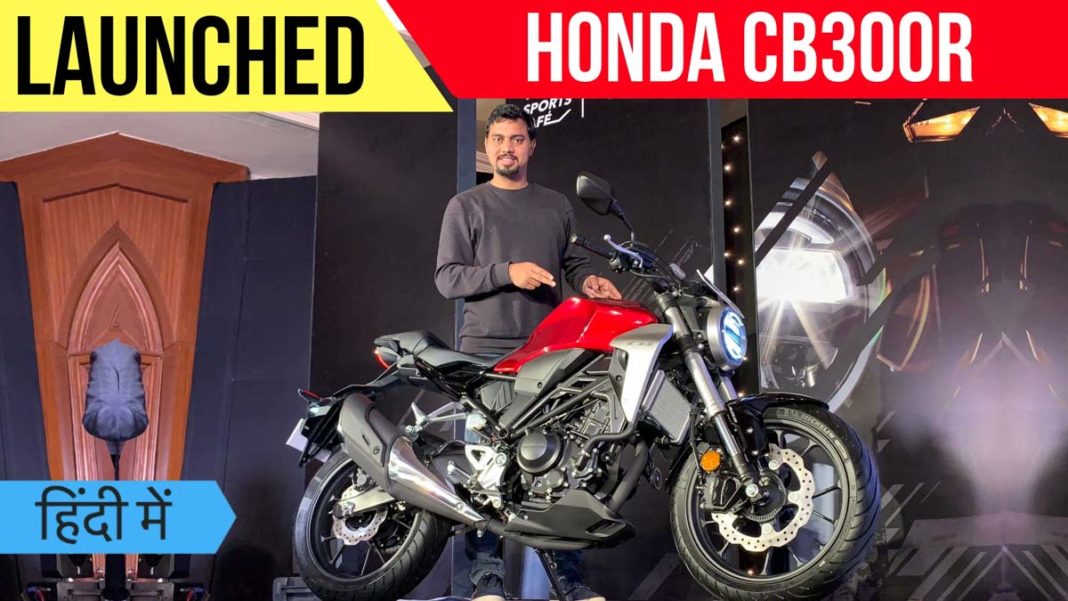 Honda has recently launched the CB300R in India priced at Rs 2.41 lakhs (ex-showroom). The motorcycle is positioned above the existing CBR 250R and will be sold via the CKD route in India. The CB300R is the smallest capacity motorcycle from Honda which will be sold via the completely knocked down route in India. That said, here is a detailed walk around video of the newly launched motorcycle.

Honda CB300R takes its styling inspiration from the café concept racer design and it will be available in two color options including the Matte Axis gray Metallic and Candy Chromosphere Red. The motorcycle features a round shaped LED headlamp which definitely goes well with the overall design. It also gets a 296 mm petal disc towards the front and a 230 mm disc towards the rear. A dual channel ABS comes as standard.

Towards the side profile, you can also notice that the motorcycle gets a dual tone body colour. The owners will love the brushed aluminium steel effect on the motorcycle because it adds a premium appeal. The CB300R measures 2020 mm in length and has a width of 880 mm.

The Neo sports café styled motorcycle has a very compact wheelbase of just 1344 mm. What is surprising is the fact that the CB300R has a fuel tank capacity of only 10 Litres which gives it an approximate tank range of 300 Kilometers.

The motorcycle is powered by a by a liquid-cooled, DOHC, 286 cc, single-cylinder unit. The engine produces about 30 bhp of peak power at 8,000 rpm and peak torque of 27.4 Nm at 6,500 rpm. Power is transmitted to the rear wheel via a six-speed gearbox (it does not get a slipper clutch). Although the power and torque figures might not excite you much but this motorcycle has a kerb weight of only 146 kilograms which makes it the lightest motorcycle of its segment.

Last but not least, the CB300R have been fitted with 17-inch alloy wheels which are wrapped with sticky Michelin Pilot Street tires. The newly launched Honda offering will rival directly against the likes of the KTM Duke 390, BMW G310R and the Royal Enfield Interceptor 650 (keeping the price point in mind). The motorcycle will be made available in 22 cities across India.