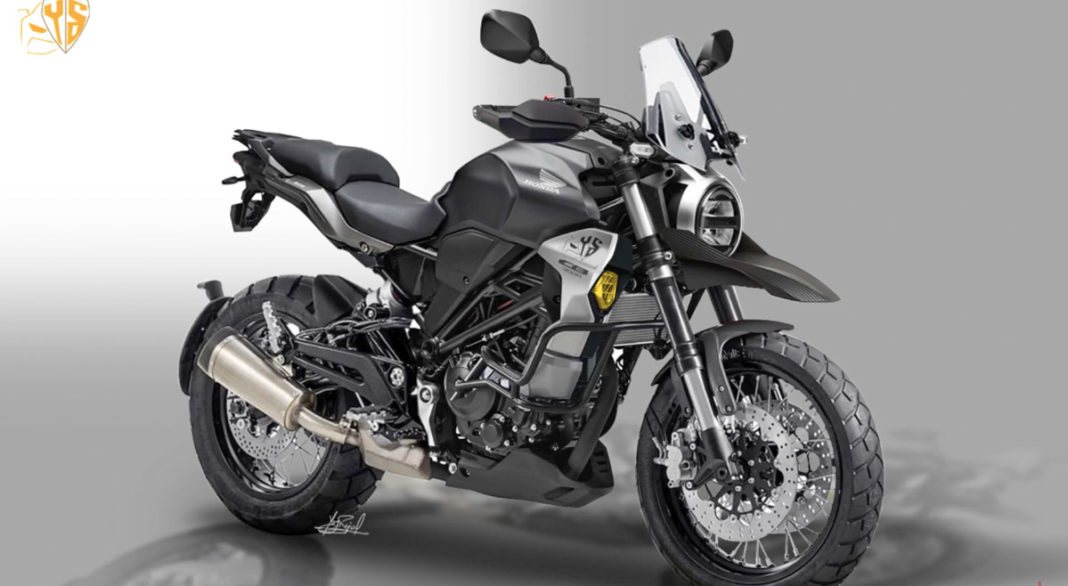 Honda recently introduced the CB300R in India. The motorcycle is a naked streetfighter and its rivals directly against the likes of the KTM Duke 390 and the BMW G310R. Although a streetfighter may not be the right motorcycle option for touring, here in this video the rendering artist uses his imagination and some fine computer skills to digitally transform the standard Honda CB300R into a touring friendly machine.

In order to achieve the touring friendly character, the rendering artist has replaced the stock road tyres with offroad tyres with deeper treads for more grip. The motorcycle has also been fitted with a windshield which is a must-have accessory while touring.

The naked streetfighter has also been fitted with an offroad mudguard as well (which looks a bit odd according to me and it could have been replaced by a smaller beak). To make it ideal for long distance touring, the artist has also replaced the stock seat with a cushioned unit which definitely looks much more comfortable for the rider as well as the pillion.

The CB300R also has been fitted with an additional auxiliary light as well to complete the look. Lastly, the stock exhaust has also been replaced with an upswept unit to add an offroading character to the motorcycle. According to the rendering artist, these modifications are realistic. However, the owner has to spend a lot of money, time and effort to make it possible.

There is no doubt that the Honda CB300R definitely has all the capability to be a perfect lightweight tourer.  The standard CB300R which was launched recently uses the tried and tested liquid-cooled, DOHC, 286 cc, single-cylinder engine which puts out 30 bhp of peak power at 8,000 rpm and peak torque of 27.4 Nm at 6,500 rpm.

The engine is paired to a 6-speed gearbox which sends power to the rear wheels. It also gets a full LED lighting setup, fully digital instrument console, and a dual-channel ABS as standard for the safety of the rider.