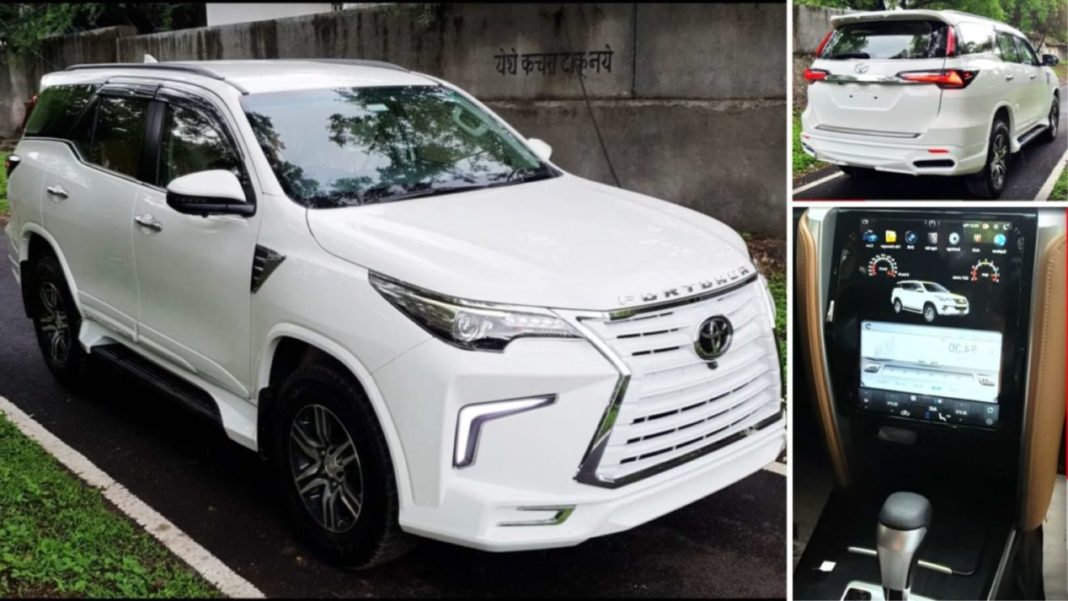 The Toyota Fortuner has been the undisputed leader of the premium SUV segment since almost forever now. While the Fortuner scores highly for its high reliability and great mechanicals, its butch looks are another reason for the great success it has garnered. In spite of the bold design, however, thee are many owners who love to make their SUVs look even hotter through a set of modifications.

The modified Toyota Fortuner you see in the video we have on this page belongs the aforementioned category. Done up by Pune-based Poona Motors, this SUV comes with a body kit that seems to have taken plenty of inspiration from the latest design language of Lexus. The SUV comes with an updated front fascia that looks a fair bit like that of the Lexus LX470.

In fact, the front-end of this modified Toyota Fortuner looks so different from that of the stock version that it could become difficult for the untrained eye to make out the roots of this vehicle. The only major difference between the front-end of this SUV and that of a typical modern-day Lexus is the lack of chrome treatment on the spindle grille of the SUV.

Instead of a chrome finish, this modified Toyota Fortuner SUV gets a body-coloured paint finish for the grille. Other than an updated front fascia, the SUV even gets side skirts. The front-end even features LED DRLs on the bumper for a more attractive look, while the lights and the wing mirrors feature Audi-inspired sequential indicators.

The interior of the modified Toyota Fortuner gets a huge Tesla-inspired touchscreen infotainment unit, which offers internet access, music system and many other apps that can be powered through a smartphone. The touchscreen unit even supports a 360-degree camera.

The touchscreen unit of this modified Toyota Fortuner even offers aircon controls. Mechanically, however, this SUV remains stock. It’s powered by a 2.8 liter-4 cylinder turbocharged diesel engine that produces a maximum power of 174 bhp and a peak torque of 450 Nm. The motor comes mated to a 6-speed torque converter automatic transmission. The SUV also comes with a four-wheel drive system with a low range ratio.