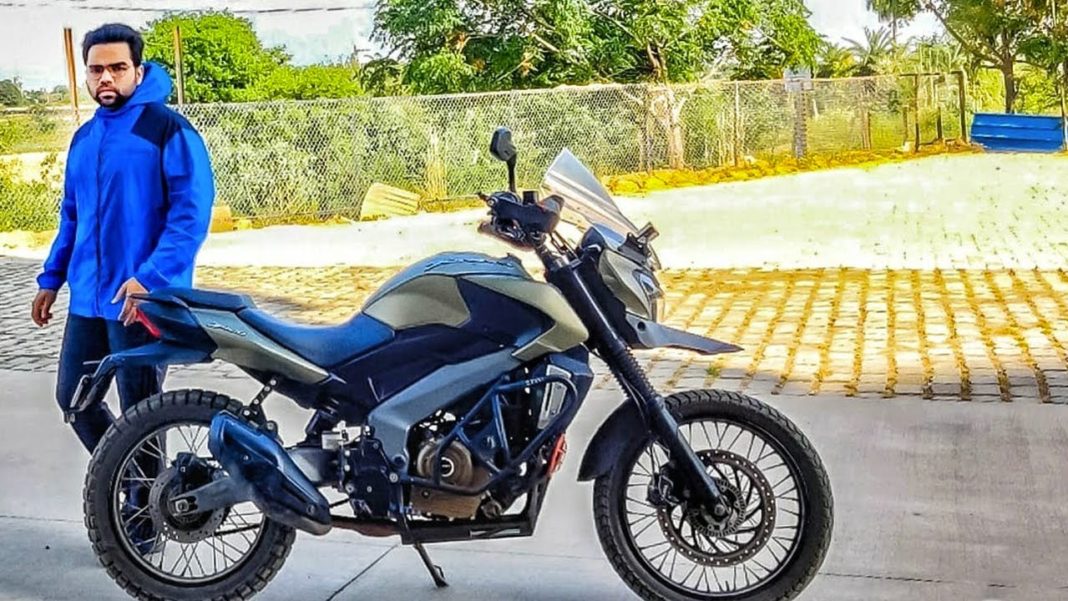 With an increased demand for Adventure-style motorcycles, many companies have come up with new models, while some owners have customized their bikes to join the bandwagon

In the last few years, the Adventure-style motorcycles have gained a lot of popularity. While it’s the Hero Impulse that can be heralded as the first purpose-built adventure-style motorcycle in the country, it’s actually the Royal Enfield Himalayan that has played a role in increasing the popularity of this segment. Soon, thereafter, we saw an influx of new models like the BMW G 310 GS, KTM 390 Adventure and even the Hero Xpulse.

Bajaj, however, has so far remained oblivious of the growing demand and hence, is yet to come up with an Adventure-style model. However, today, we have a modified Bajaj Dominar 400 that looks like a proper adventure tourer, which is thanks to the several modifications it carries.

The video showing this modified Bajaj Dominar 400 has been uploaded by Adv JVD on his Youtube channel. It starts by highlighting all the customizations that the motorcycle has undergone. First, the video gives us a look of the front, where the Dominar features a huge windshield, while its stock mudguard has made way for an aftermarket unit. The stock handlebar has been replaced with a wider unit and the owner has also installed handlebar risers for better ergonomics on long rides.

The stock alloys have been replaced with a 19-inch spoke wheel at front and an 18-inch unit at the rear. The new wheels have been shod with off-road-spec tyre that have even increased the ground clearance of the motorcycle. Furthermore, the motorcycle carries a new bash plate that should keep the sensitive parts protected when the motorcycle ventures off the beaten tarmac.

The stock footpegs have been replaced with aftermarket ones, which, again, work towards improving the ergonomics. At the rear, the motorcycle gets an updated monoshock which comes from the MY2019 Dominar and has been retuned to match the owner’s weight. Even the chain sprocket has been updated to improve the gear ratios. The motor, however, remains untouched, which is not a bad thing if you consider the high reliability required from adventure touring motorcycles.

It is important to mention here that the modified Bajaj Dominar seen here is the older version and hence, its 373cc, single-cylinder, liquid-cooled, fuel-injected engine outputs a maximum power 35 bhp and a peak torque of 35 Nm. The 2019 version of the Dominar is powered by the same engine but generates a higher output of 40 Bhp, while the peak torque remains unchanged. As per this video, the entire modification process took 3 months to be carried out successfully.