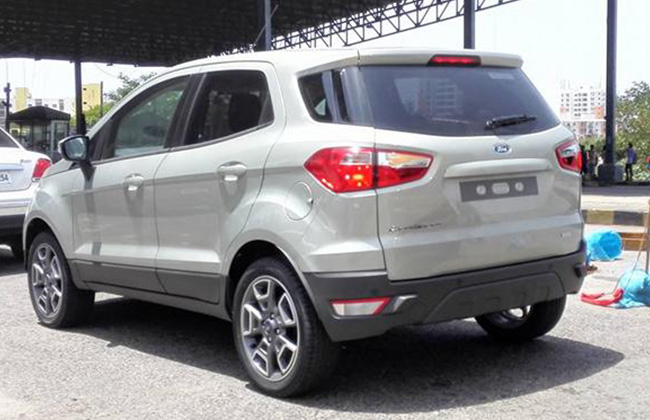 Mahindra and Maruti Suzuki will launch their compact crossovers this year and things might just get a bit difficult for the EcoSport in future.

Ford EcoSport was the car that brought everybody’s attention towards the compact SUV segment. The EcoSport has been raking in great numbers for Ford but with competition now catching up, the American auto manufacturer is planning to give the car an upgrade in near future.

Ford has begun testing the EcoSport facelift in India. The upgraded model does not get any major changes, either inside or outside. There have been slight redesigns at the rear but it is highly possible that you might not recognize what all has changed.  The one caught on test came without a spare wheel mounted at the rear. The spotted vehicle was the left-hand-drive model, which is essentially the model which is exported from Ford’s Chennai plant. The overhauled EcoSport will get a slightly tweaked chasis with reconsidered spring and damper rates. It will likewise advantage with redesigned ESP (Electronic Stability Program) and power steering system framework.

As far as the insides go, SUV gets an all-new instrument cluster, chrome trim and a redesigned infotainment system. The SUV wil additionally get new brushed aluminum finish for the nose and restyled alloy wheels. The EcoSport has been facing the heat from the launch of the likes of Fiat Avventura, Elite i20 Active and Etios Cross and Renault Duster. Hyundai will launch the Creta on July 21st and that will just heighten the competition. Mahindra and Maruti Suzuki will launch their compact crossovers this year and things might just get a bit difficult for the EcoSport in future.

So it was only fitting that Ford started readying up a mid-life upgrade. Expect the revised model to bow in the first half of 2016.