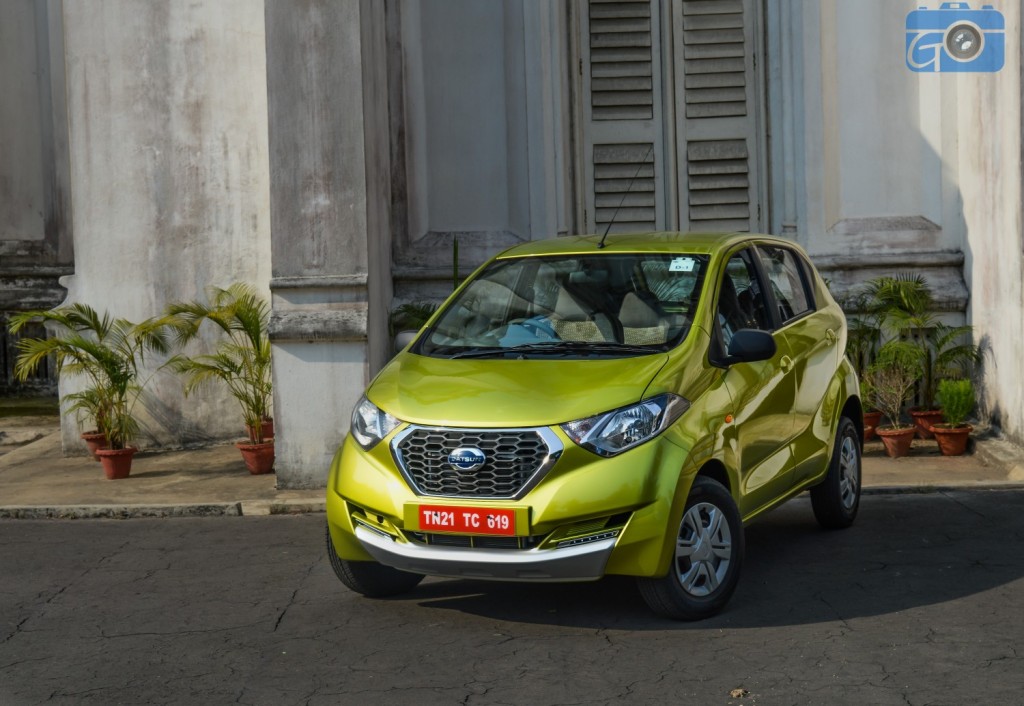 Datsun Red-GO enters in a segment that occupies majority of the first-time buyers in the market. Led by the undisputed Maruti Suzuki Alto, the Nissan’s budget brand has been valiant in bringing up a product squarely aimed at the ultimate benchmark that ruled the entry-level space since the very beginning. Considering the revived low-cost Japanese brand is entirely new for the Indian customers, Nissan has pushed boundaries and tired to place it lower in the pecking order of the Alliance partner Renault’s successfully running Kwid hatchback.

With similar underpinnings as that of the Kwid and the exterior styling resembling close to the concept revealed at the Auto Expo 2014, the Datsun Redi-GO is all the rage on paper but as we hit the road in Kolkata we learned more about what the company portrait as an ‘Urban Cross’ whose potential can up the competition by a few notches. Here is our test drive review of the Datsun Redi-GO that will explain you all the pros and cons of this rather impressive tall-rider: 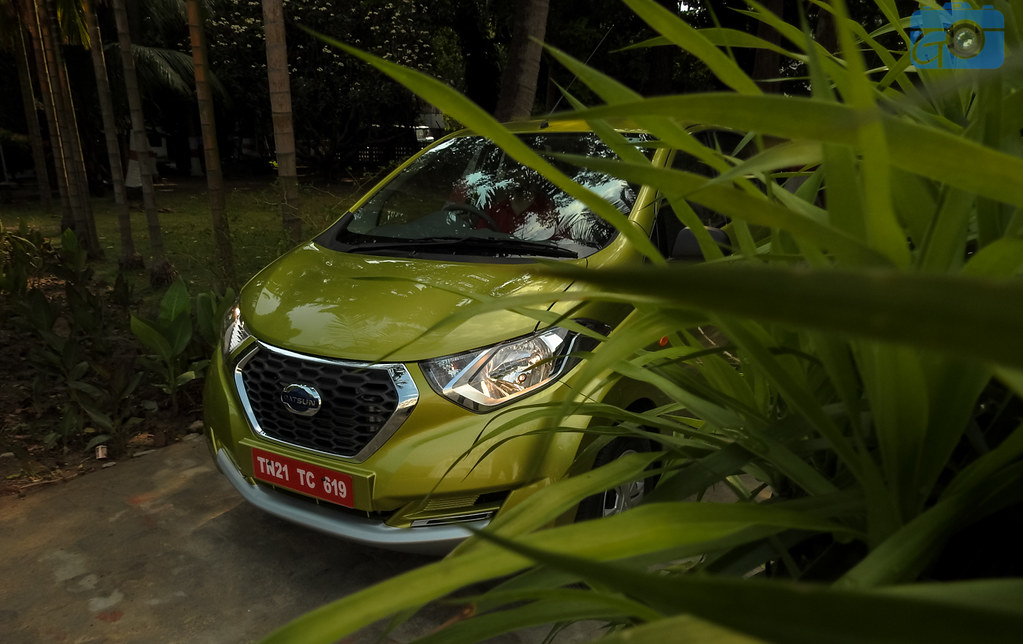 The RediGO is based on the design influences from the brand’s Yukan styling language and to the surprise of many there was little to choose between the production version and the concept debuted at the Auto Expo a couple of years ago. The Redi-GO does make its GO and GO+ siblings appear obsolete with a modern styling package.

The quirky nature of the Red-GO is, on the flesh, you will get an impression that it definitely isn’t a small hatchback like the Maruti Alto or SUV-esque like the Renault Kwid but an offbeat crossover with a tall posture. 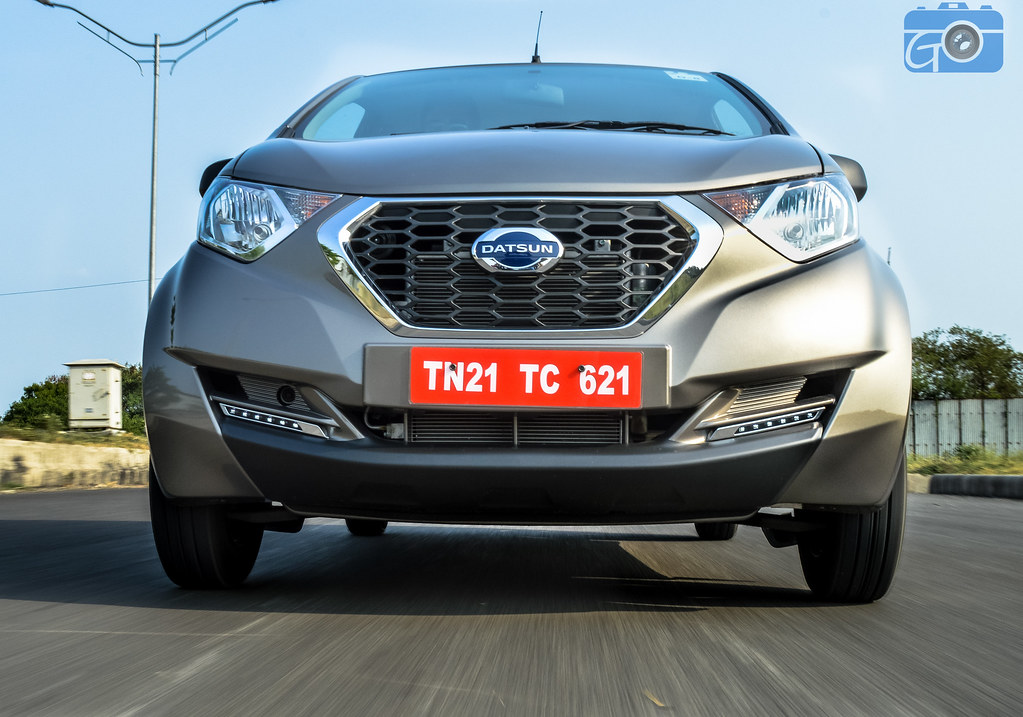 The front fascia gets occupied by the prominent matte black meshed hexagonal radiator grille surrounded by chrome. The imposing large grille is designated for future Datsun models as well and the sleeker chrome-detailed headlamps are wrapped around to convince a sharper façade. 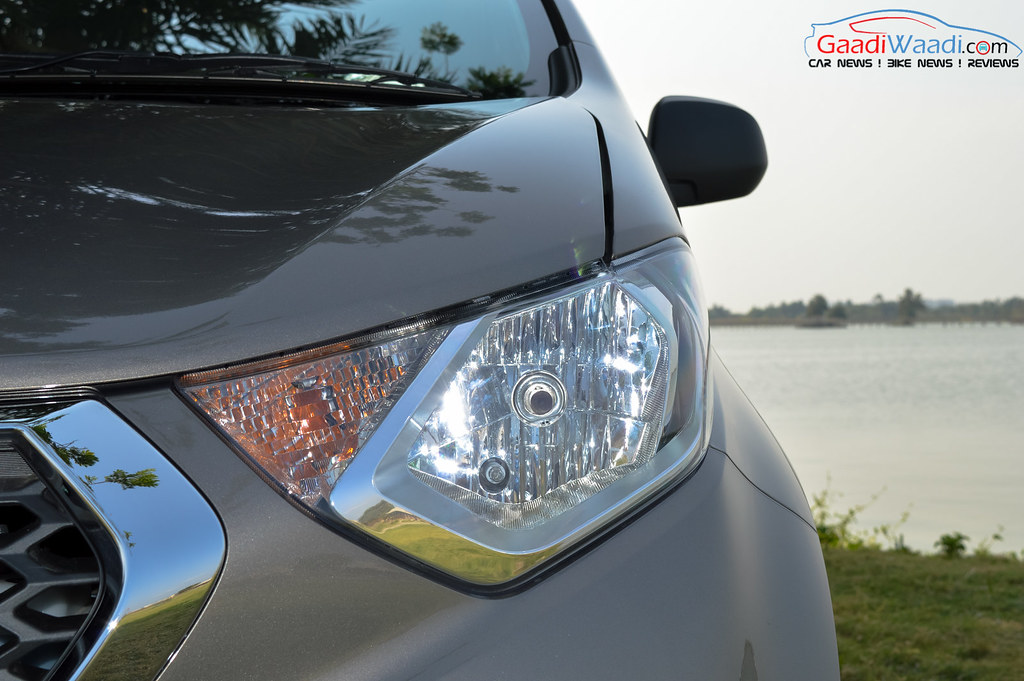 The car has plenty of creases all around and the wider front bumper has an additional plastic cladding for underbody protection. The fog lamps are replaced by LED Daytime Running Lights which could be offered on the top-spec trims or as an optional extra. The gap between the plastic cladding and number plate allow for a more affable appearance. 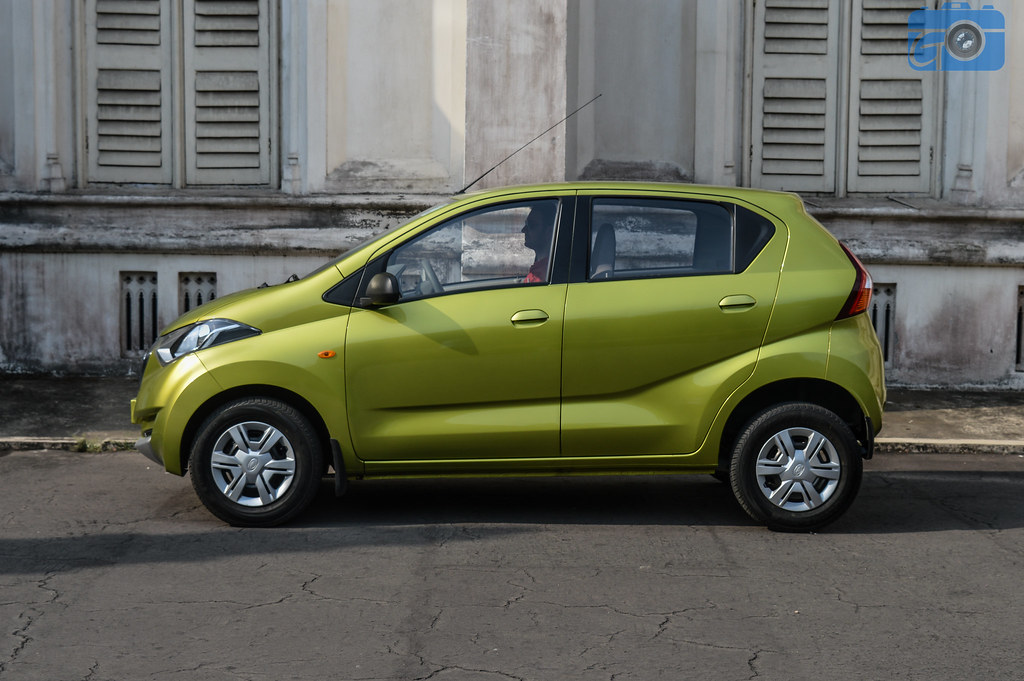 Standing on the side, you won’t be forgiven to not notice the tall stance the Redi-GO possesses. Datsun said the height can help for the ease of getting in and getting out and the purposeful claim cannot be blamed as you will find it easier to ingress and egress. The side profile features character lines running to the length of the car and the wheel arches are flared for a sporty presence. 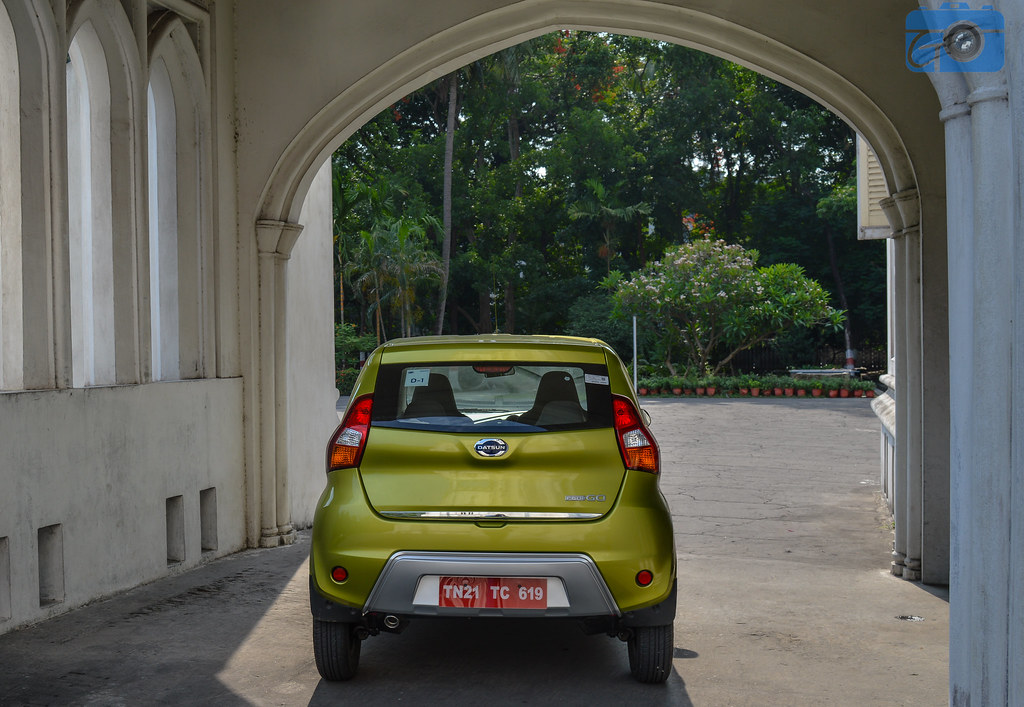 There are uneven contours at the rear with a bold line covering the protruded tailgate from end to end. The highly placed tail lamps have received clear lens treatment and the wider rear bumper has chrome exhaust system fitted underneath. The faux skid plate at the rear accentuates Datsun’s claims of Redi-GO being an Urban Crossover. 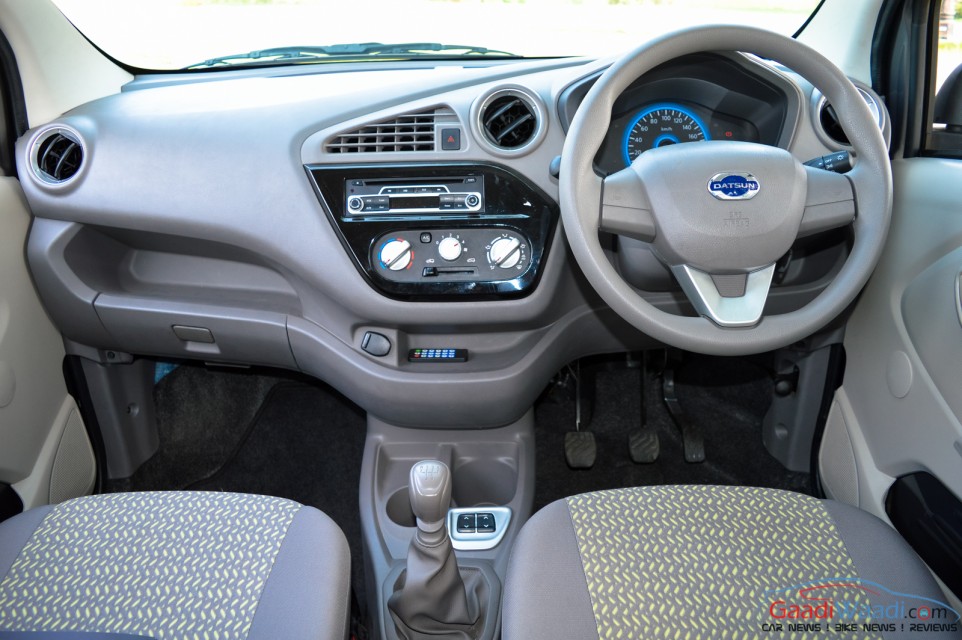 The Redi-GO gets a dual-tone grey and beige colour scheme and it’s a sure step-up from the dull interiors of the GO and GO+ siblings. Most importantly, it features a tall seating position with good road visibility and a relaxed cabin. It has identical instrument cluster to the GO hatchback which is neat and flowing with the same blue analogue speedometer and a small orange digital screen but lacks the digital display unit of the Kwid. 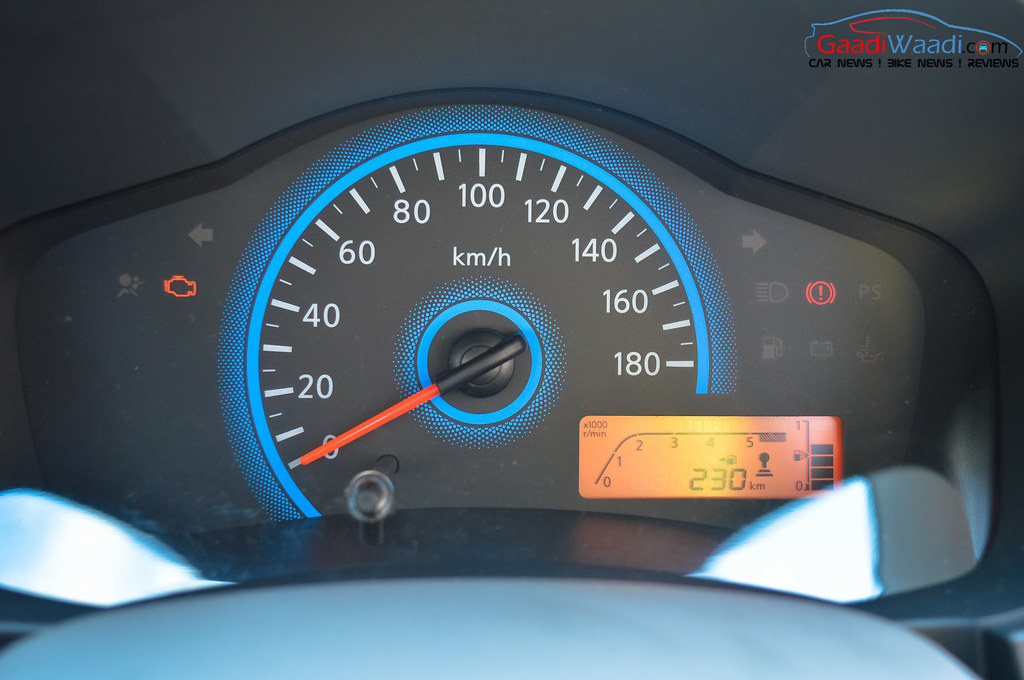 Vital information like trip distances, distance to empty, fuel economy, gear shift indicator will be displayed as in the Kwid. Around the single-DIN audio system and the HVAC control from the Renault/Nissan parts bin, the centre console has an upmarket layout as it has Piano finished bezel. The audio system is an improvement from the GO siblings as it comprises of radio, CD player, USB and aux connectivity which cannot be found in the GO twins. 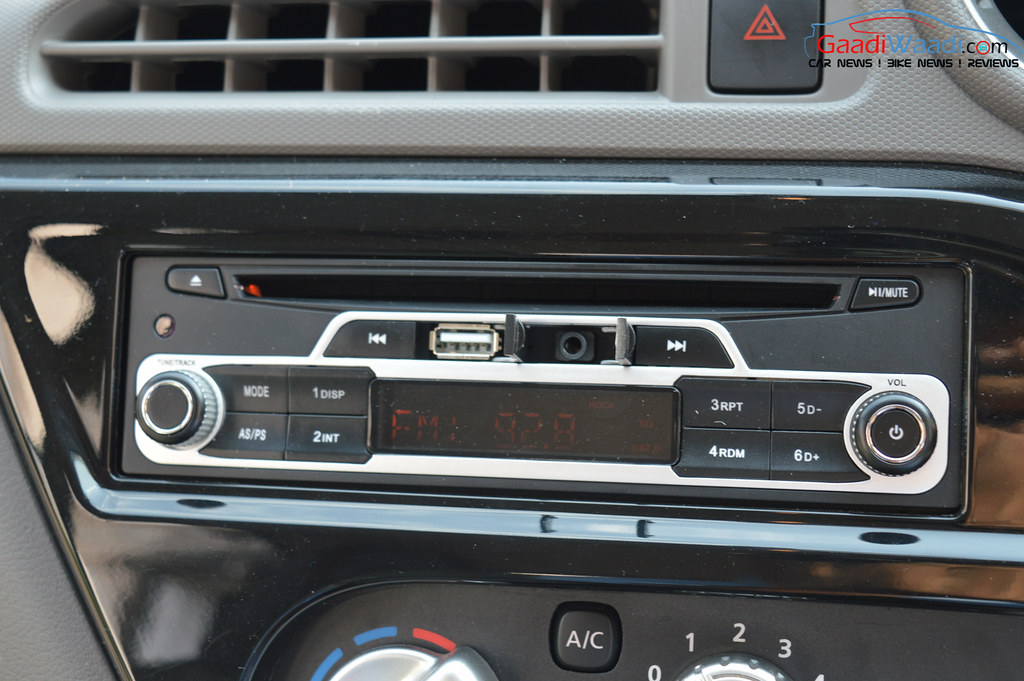 The central AC vent, meant for rear passengers, cannot be shutdown annoyingly and the glove box is too shallow to hold anything other than the car’s paperwork but the open shelf just above it can be used for decent storage. The front door panels don’t offer much space either and the cubby hole below the AC unit can comfortably hold a mobile phone. 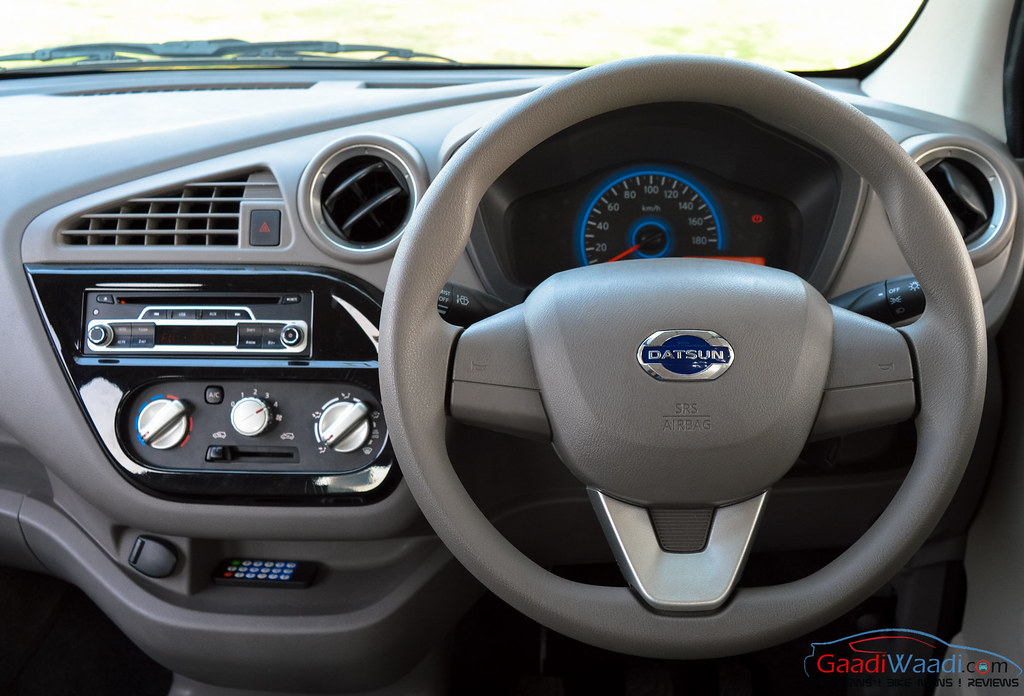 Beneath the handbrake, you could utilise a flat tray, a cup holder and a larger bottle holder. The quality levels are decent but they have not been as impressive as the class’s best Hyundai Eon or the Renault Kwid as the cost saving measures have certainly taken the toll on Datsun. 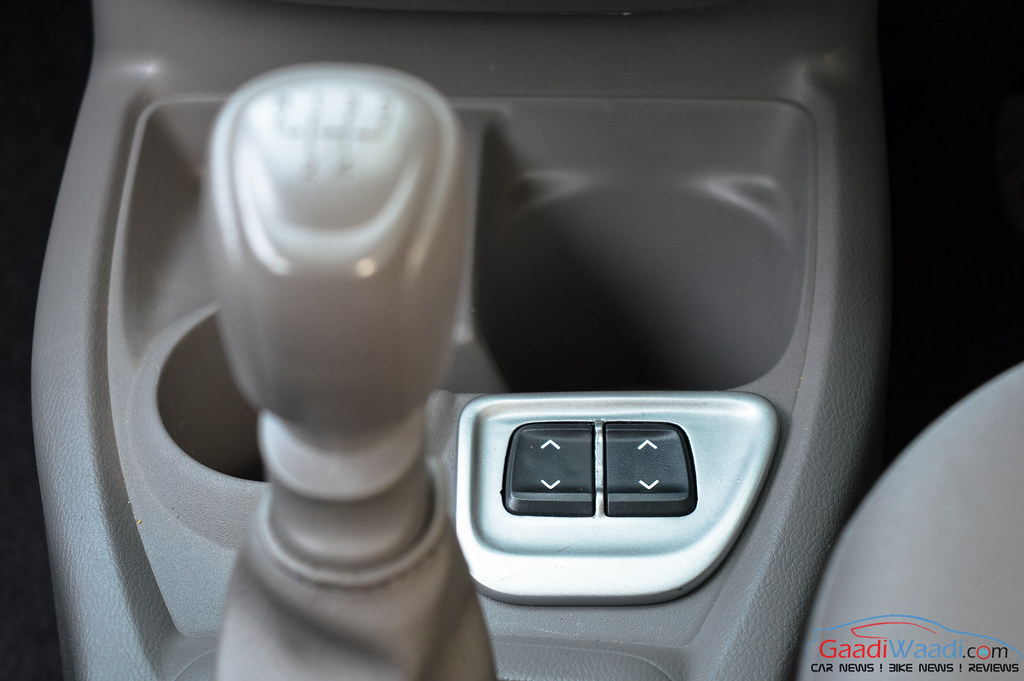 You do get quite a lot of exposed sheet metal in the cabin, for instance, behind the door frames and in the B and C pillars. That won’t convince some customers to be honest!

The cost-cutting goes by a long way as the Redi-GO won’t have central locking, no provision to open boot from outside, no in-car adjustment for rear-view mirrors, lack of cladding around pillars and two-way adjustable single wiper. 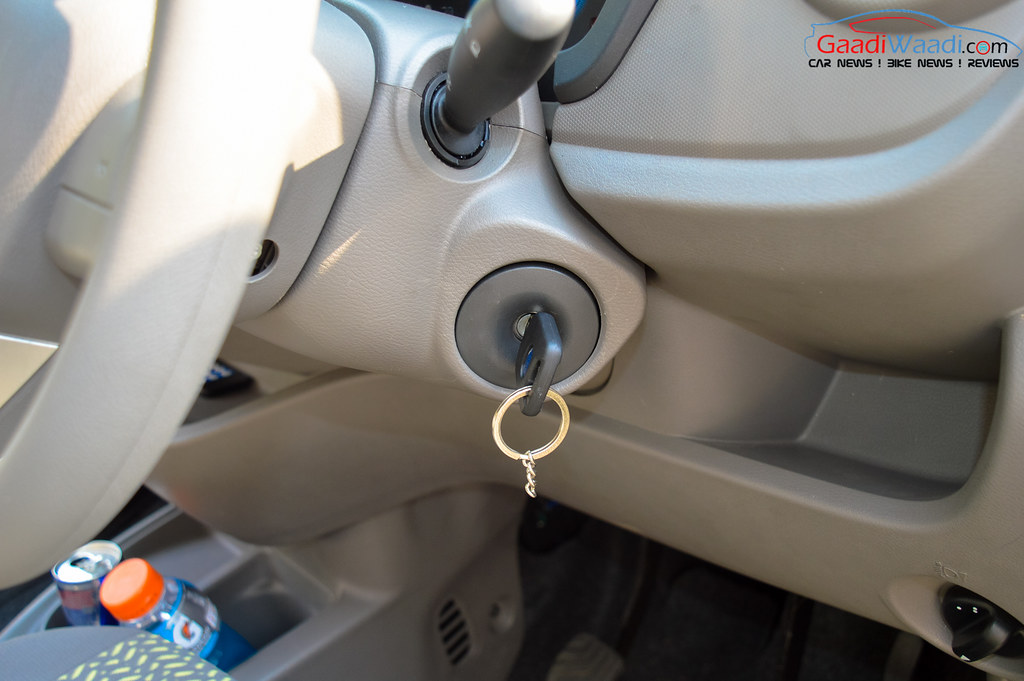 The static rear seatbelts can only be adjusted manually and Datsun won’t provide ABS even in the top-end variants but driver airbag can be ordered in the high-spec model. 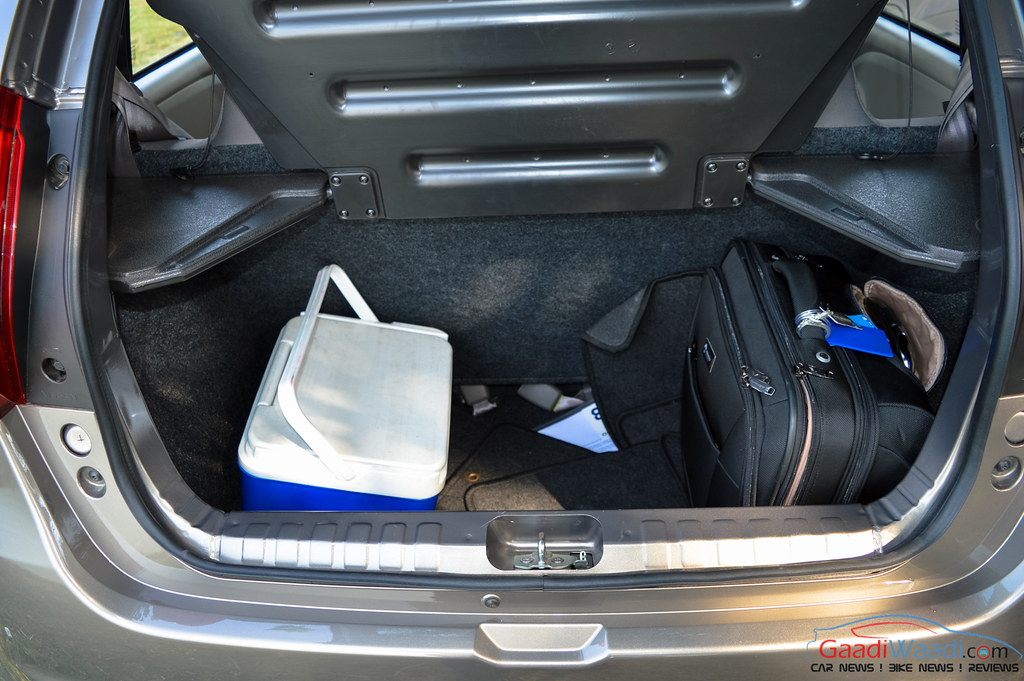 The Redi-GO accommodates for 222 litres of bootspace, which is not class-leading as Kwid, facilitates 300 litres but the high loading lip creates problem – making the hauling difficult. 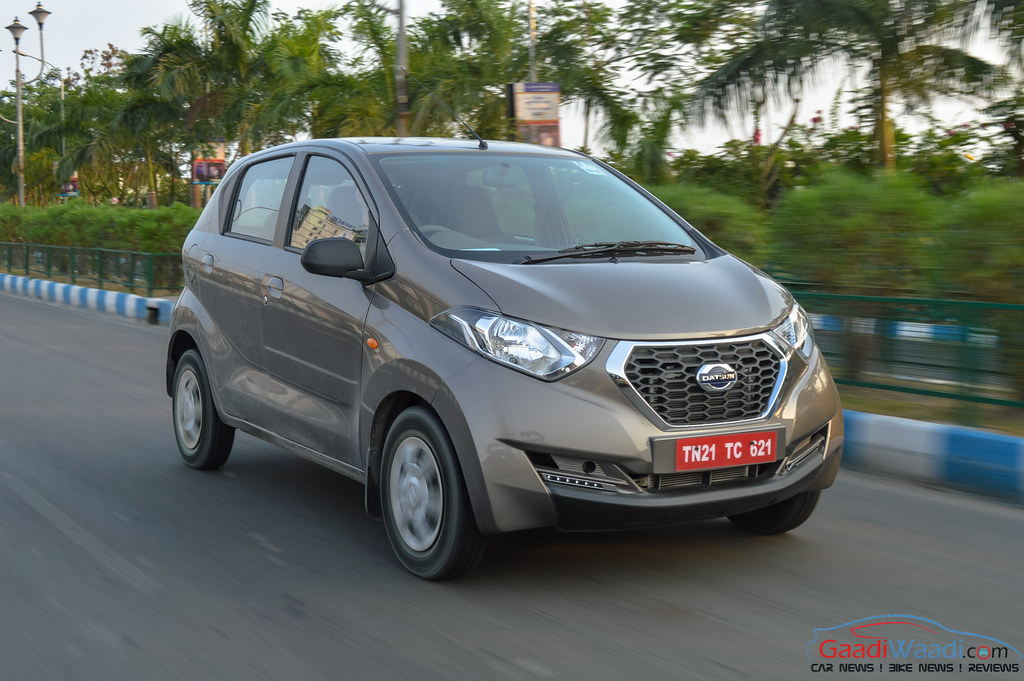 The mechanicals are as similar to the Renault Kwid as the 799cc, three-pod, petrol engine driving the front wheels via five-speed manual transmission, produces a maximum power output of 54 hp at 5,678 rpm and 72 Nm of peak torque generated at 4,386 rpm.

The compact engine finished in aluminium weighs as little as 57 kg due to the plastic oil sump and alternator attached to the engine block. The claimed fuel economy remains as in the Kwid as the Redi-GO has been ARAI-certified to give 25.17 kmpl while the top-speed of 140 kmph can be attained on a very long stretch. The new Datsun is rated to have the best-in-class 0-100 kmph acceleration time of 15.9 seconds but we certainly doubt that as it constantly took longer to get there on our drive. 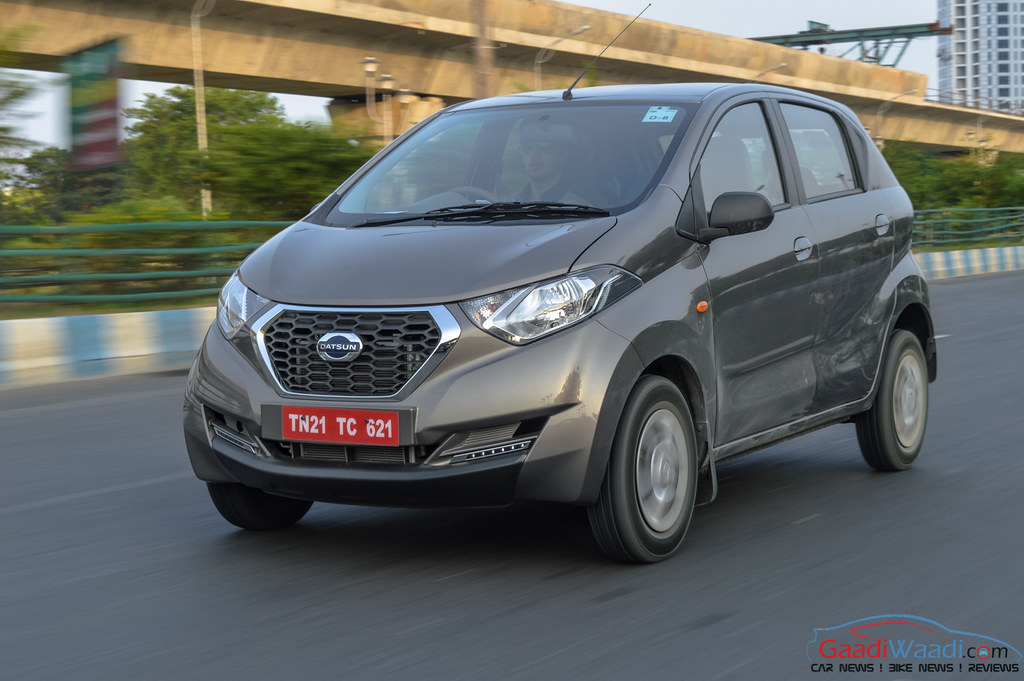 The engine idles at less than 1,000 rpm and doesn’t want to power up in the second gear. But as we got near 3,000 rpm mark, the motor finally came into life as the mid-range performance is quite nimble – more responsive than the Kwid in that range. It has a good cruising ability between 80 and 100 kmph in the top gear. 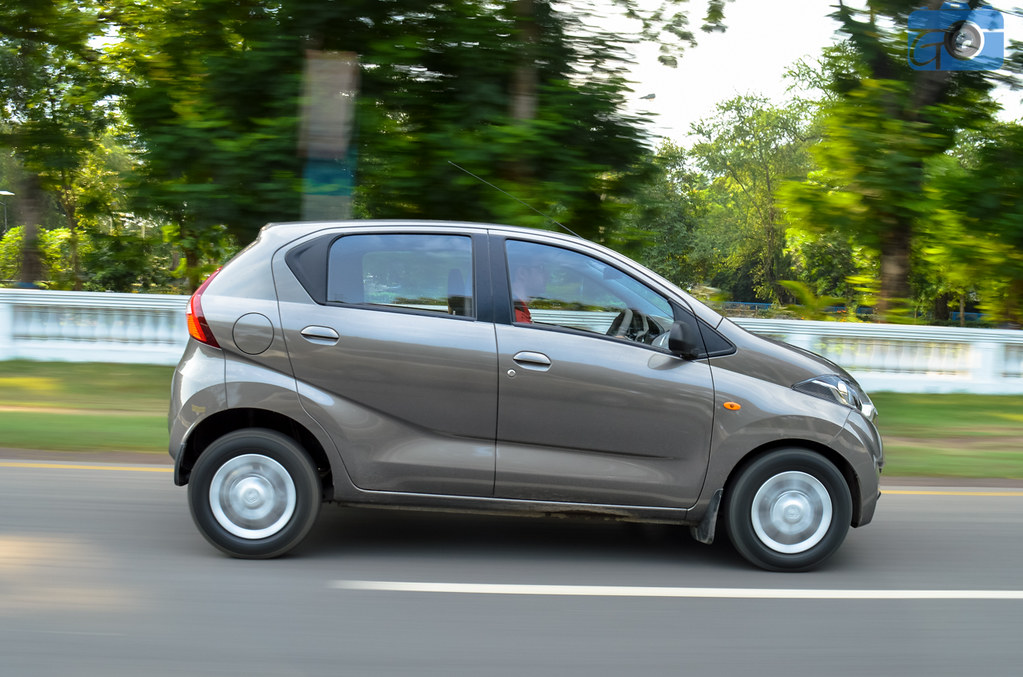 Despite not being rev-friendly as its Kwid cousin, the engine refinement is noticeable but the high-ride stance and large glass portion have inevitably enabled noise to come in at higher speeds especially on the highway. 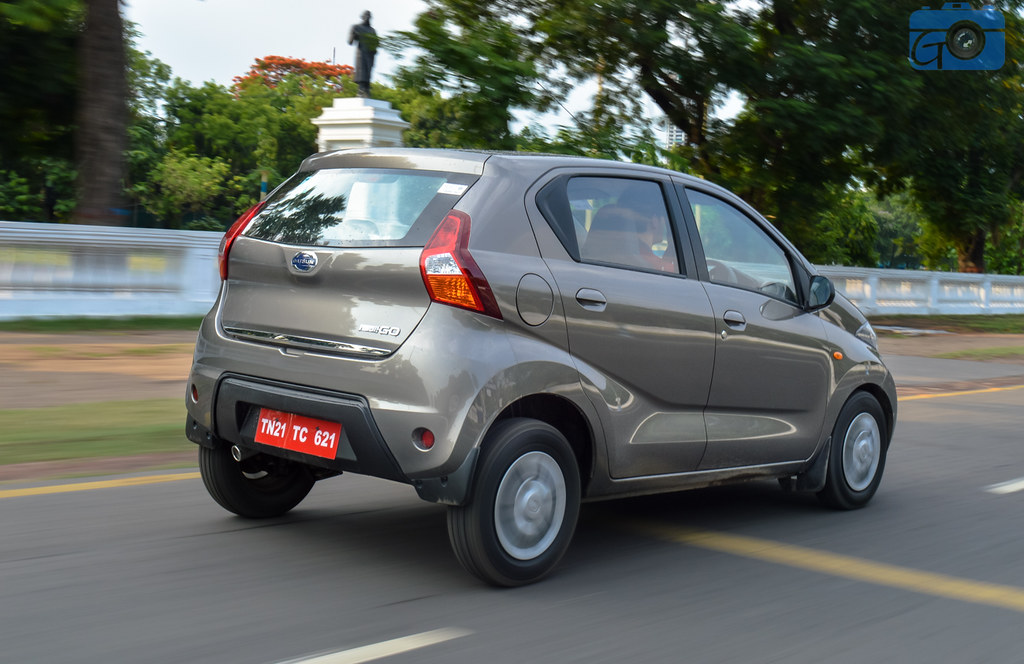 With five occupants on board, the Redi-GO sits down at lower revs and asks for frequent gear changing from the gearbox that’s not known to be supple. The steering wheel vibration is high on up to 1,200 rpm and the dog-leg five-speed gearbox will be of immense help for the first-time buyers. Despite having identical gear ratios, the Redi-GO is not as quick or stress-free as the Kwid and perhaps the biggest minus is the very light steering. 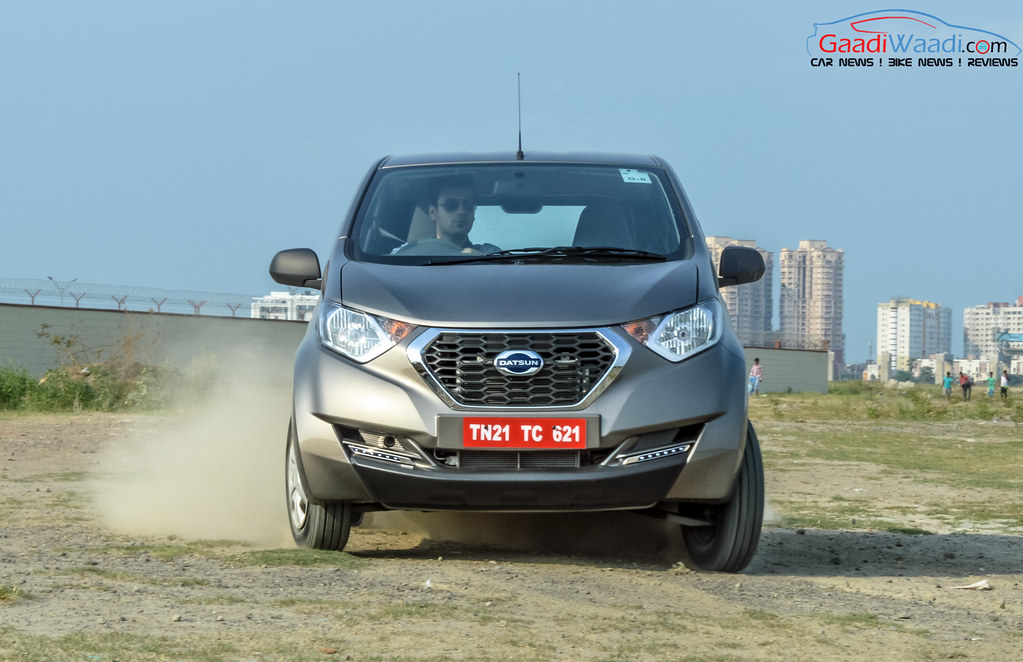 The tall-boy style meant that it’s easy to get in and out at front and rear. The cabin does offer generous headroom while four medium-sized adults and a kid can sit comfortably. Although, Datsun says the Redi-GO has the class-leading rear space, taller passengers will find it quite uneasy to sit on both rows with the upright seatbacks but the slim front seats are comfortable. The under thigh support is good at front and rear but it could have been improved further as well. 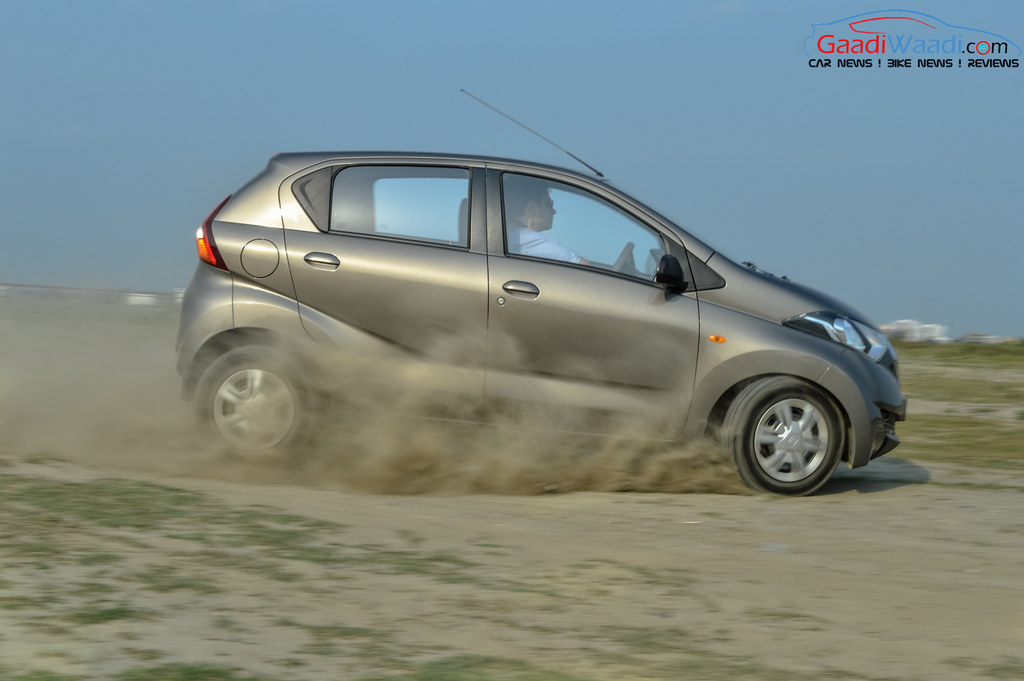 The large glass area and the tall seating position offer roomy feel-good cockpit but the shape of the C-pillar will give you a hard time reversing. The rear seat’s backrest can be folded for more room but the plastic-made parcel shelf strapped to the chassis will really hinder the loading area. 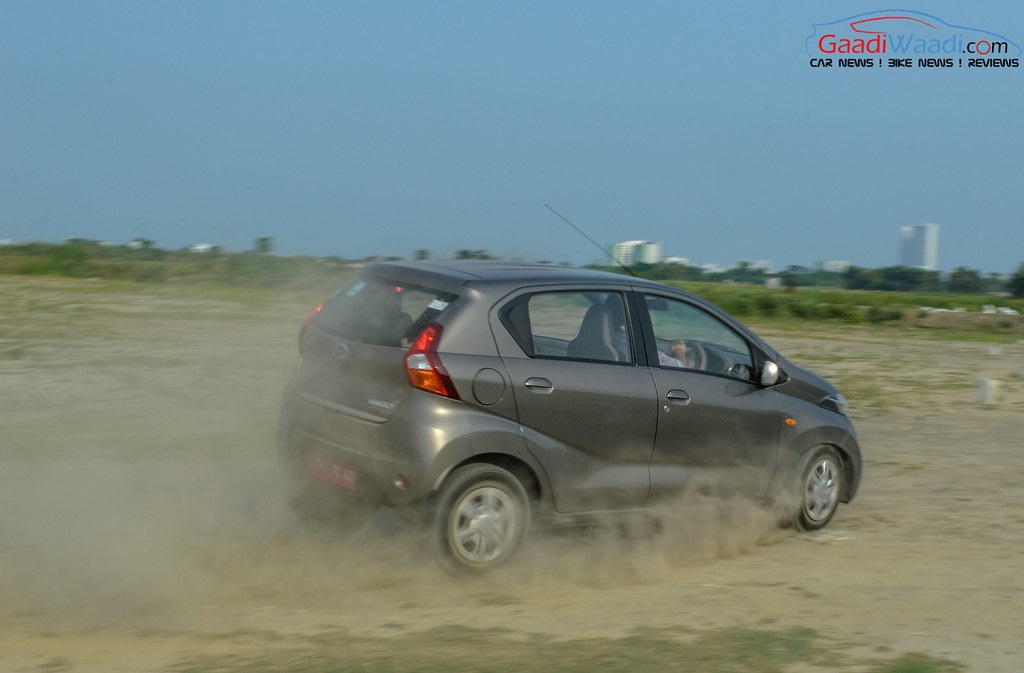 The Redi-GO has its setup tuned for commuting on the urban roads. Its best-in-class weight stands at just 635 kilograms, 25 kg lighter than the Kwid. Consequently, the car had a zippy ride around Kolkata. The steering becomes heavy on the higher speeds but gets too light and easy to corner or turn in lower speeds – the top-end versions will gain you responsive electric power steering though. It sits on the CMF-A platform which underpins the Kwid and Datsun confirmed that no big modifications were made to the global flexible architecture to adopt the Redi-GO. 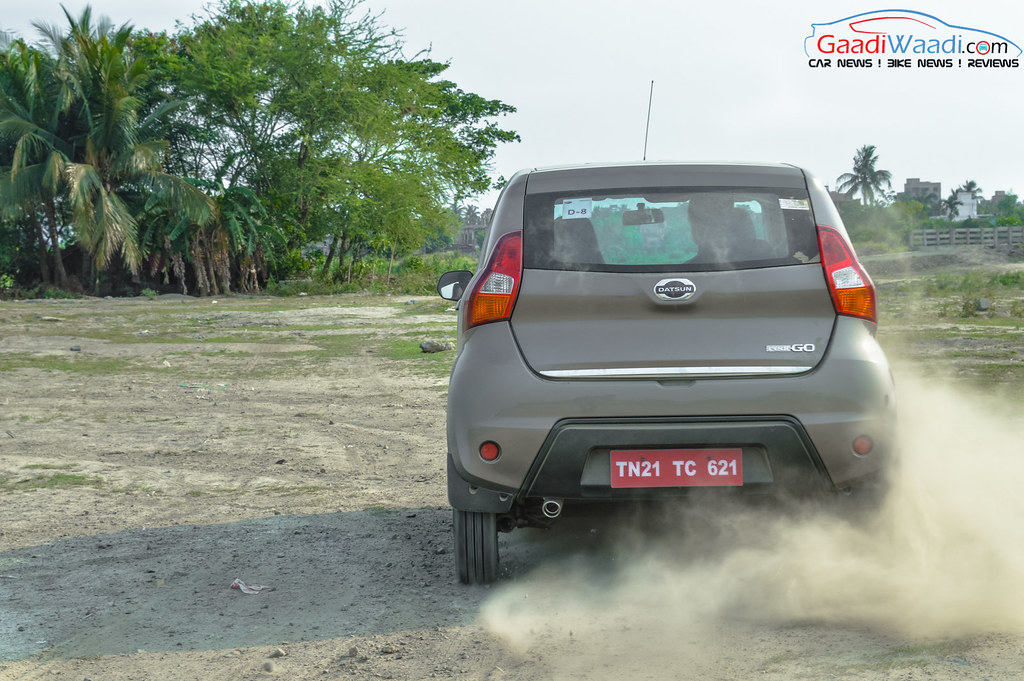 The front suspension has McPherson struts with lower transverse link and a twist beam with coil springs setup can be found at the rear – with understandably increased spring lengths. For a tall-riding car, the bodyroll is minimal as the wheels are pushed to the very ends of the car. The suspension absorbs bumps well on low speeds but you do get the juggle when riding over potholes at higher speeds. The set of 155/80 R13 Ceat tyres grip the road and as a result you can take the corners with confidence but on the highway the car gets a bit unstable due to the tall riding ability. 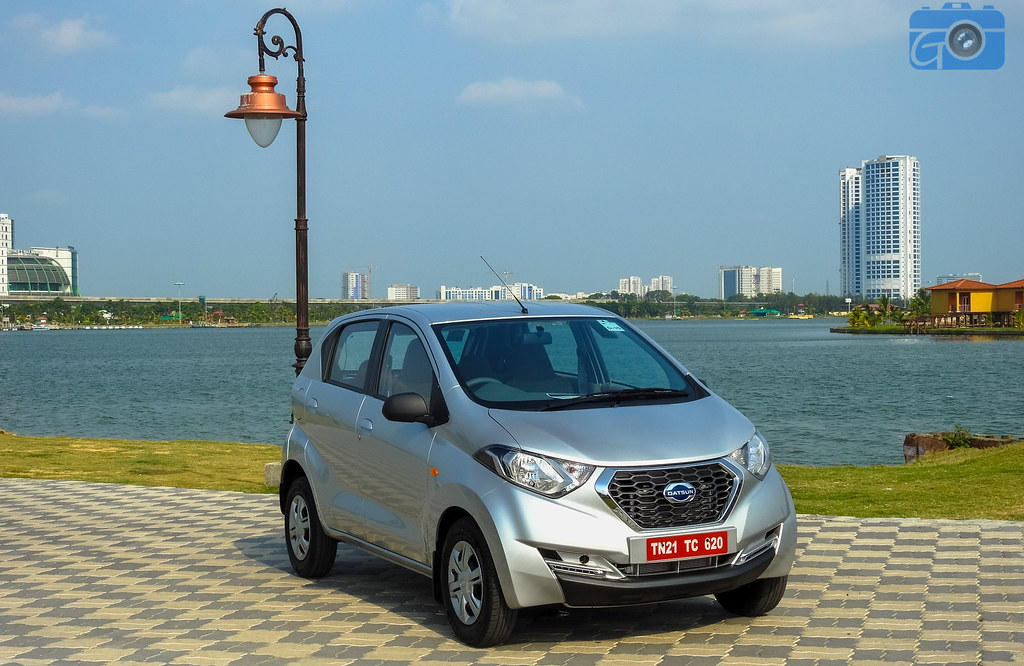 Datsun has promised to undercut rivals in the A-segment when the price listing gets announced in the first week of June. The Redi-GO will be marginally priced lower than the Alto, Kwid and Eon and that the base variant could be offered at as low as Rs. 2.5 lakh while the top-end model could ask for Rs. 3.5 lakh. 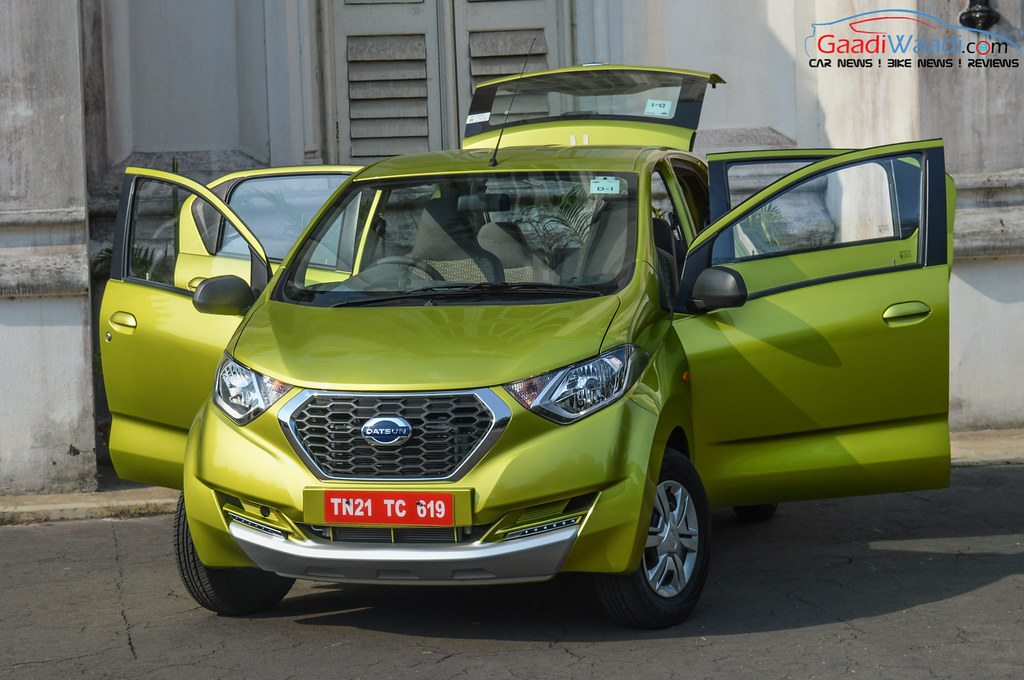 As the low-cost Japanese brand relies heavily on the pricing of the model, there have been plenty of obvious compromises made like the exposed sheet metal in the cabin and the below-par quality of the interior bits. 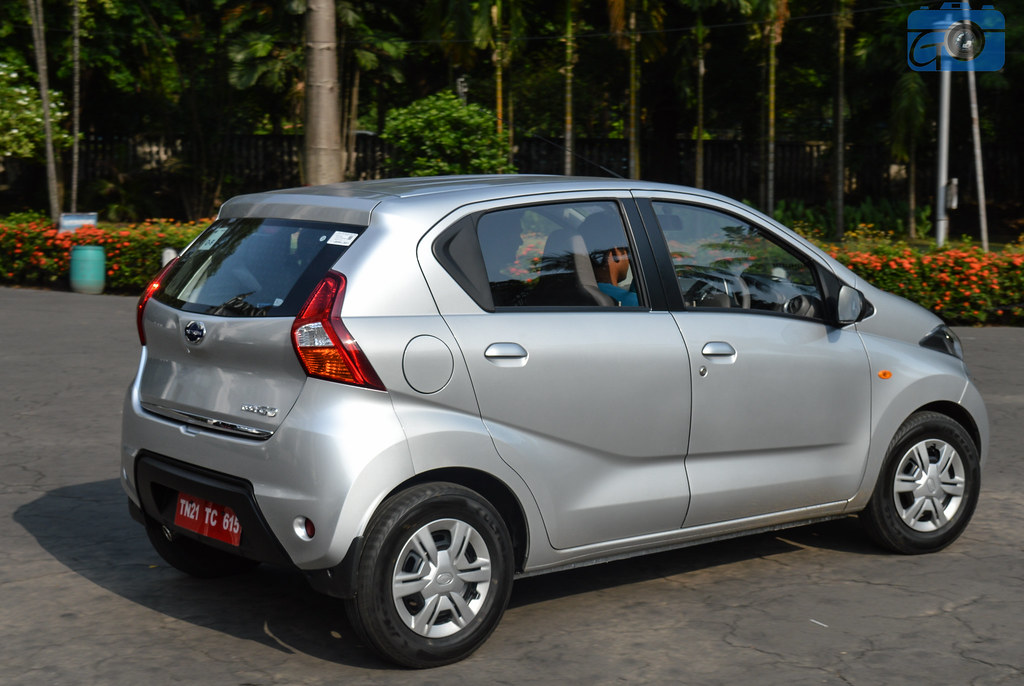 Datsun vows that the Redi-GO’s maintenance will be on the low-end of the scale due to more than 98 per cent localisation but the unanswered question is will the customers prefer it over the Renault Kwid? The pricing factor is not the only advantage Redi-GO has as the exterior styling will play a significant role in enticing customers but the drivability and features provided on the Kwid are streets above what the Redi-GO is capable of at present. 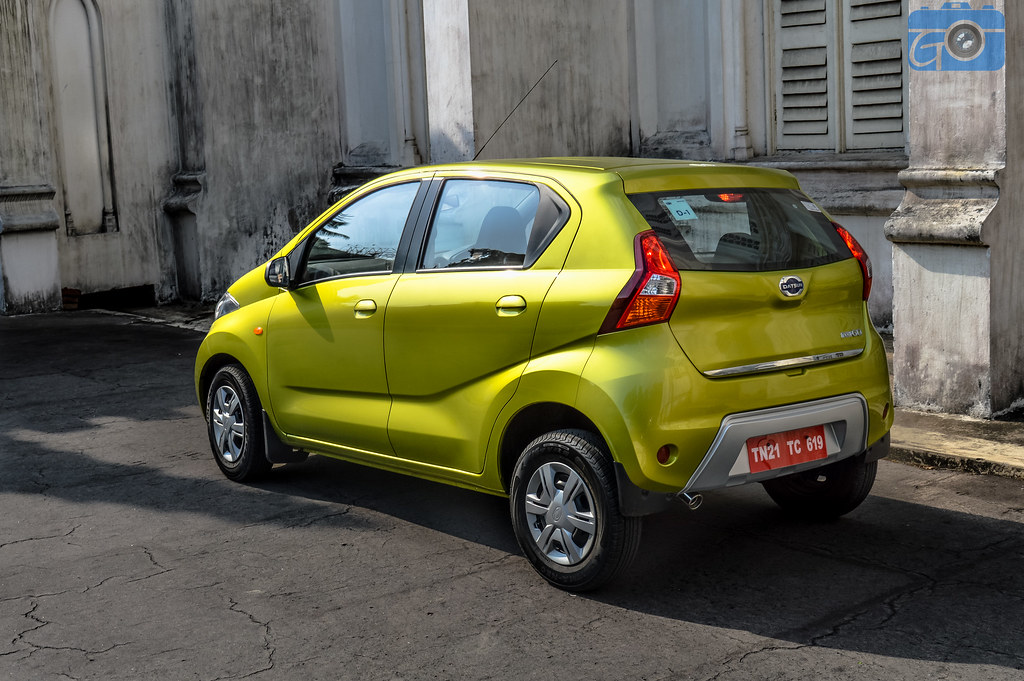 However, the tall riding stance, comfortable seats and decent cabin space will appeal for more buyers as Datsun prepares for a ‘third GO’ in its revived chapter at the established rivals.