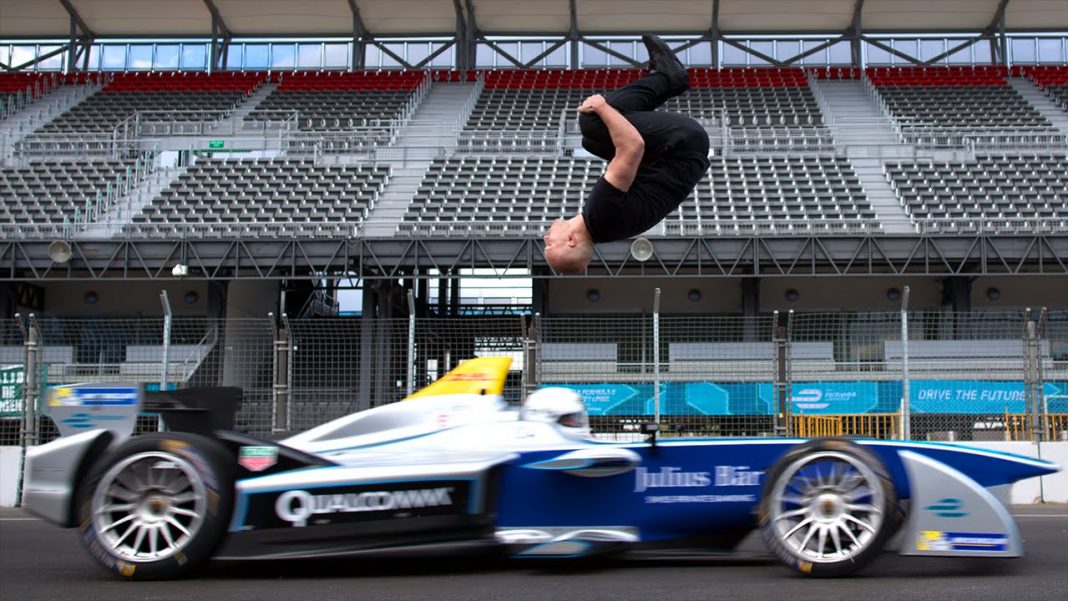 When professional stuntman Damien Walters was waiting for the Formula E car to come near him, almost every one of the 60 crew members was waiting with their heart in hand. But, when he did that amazing stunt so successfully, it was like a rush of relief and overwhelming expression of cheer around everyone. Well, what did he do? Check the video to know that.

Damien Walters performed a stunt by jumping over a Formula E car, which was coming from his behind. Interestingly, he didn’t see the car coming at him, as he was facing the opposite direction. It was just the ear deafening sound of the racing car which was charging at him at a speed of 96.5 kmph. Damien Walters had literally not a fraction of second to waste and no room for mistake also.

Had he jumped a bit early, he would have hit the back of the Formula E car with his head, Had he jumped a bit late, his legs would have hit by the fast charging car. So it was a matter of great anticipation, timing and self control, which Damien Walters did so efficiently. Another interesting fact is, it was Damien Walters himself who proposed to the Formula E about the stunt. The entire team went through two days of preparations to do the stunt perfectly.

Behind the wheel of the particular Formula E car was famous stunt driver Alistair Whitton, according to whom, this stunt has been just crazy. Back flipping is technically blind, as the rule is you cannot see the object coming at you. Therefore, Damien Walters used a digital clock, which was telling him the precise moment when he had to jump, which was 6.6 seconds, after the Formula E car started rolling.

The amazing stunt was performed last month in Mexico City, and it required 60 crew members including safety professionals and stunt experts. The entire stunt was shot using drones, GoPros, 360 degree camera mounted on the Formula E car. The footage was shot by around 30 people including three track camera teams.