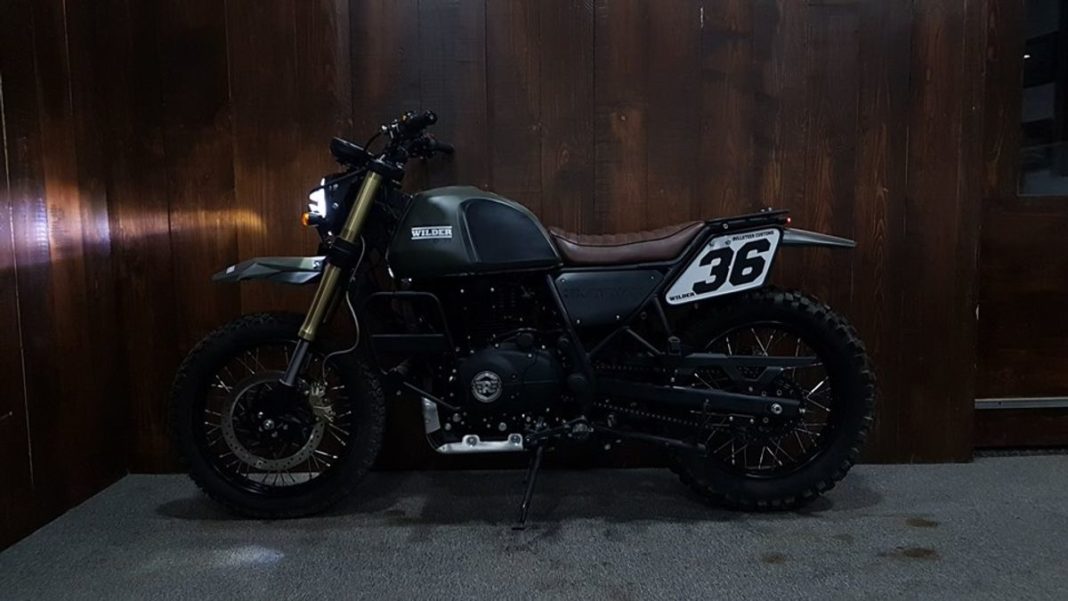 We have said this a couple of times already that Royal Enfield’s motorcycles are the easiest platforms for customization teams to work their magic on. We have seen plenty of noteworthy examples of custom made Royal Enfield motorcycles in the past and recently Bulleteer customs have modified a RE Himalayan and successfully managed to unleash the adventure tourer’s wild side.

Bulleteer customs have christened their custom Himalayan ‘Wilder’. The motorcycle has been built for a client who is a huge fan of motocross motorcycles and wanted his Himalayan to be more purposeful and practical for rough terrains.

Talk about the changes and the custom adventure tourer has been fitted with a golden USD fork at the front which replaces the stock conventional forks. The stock front and rear tyres have also been replaced by a wider 110 mm and 140 mm off-road spec knobby rubbers respectively. The stock headlamp unit of the motorcycle is also replaced by an aftermarket LED unit. The headlamps are protected by a special grille. The motorcycles also has been fitted with a custom made front and rear motocross styled fenders which go well with the overall theme of the motorcycle. The ‘Wilder’ also gets a custom seat with a rear carrier grill. However, there is also an option to fix the stock seat as well in case the owner changes his mind.

Apart from all that the custom Himalayan also gets a motocross styled number plate which too blends well with the overall theme of the motorcycle. To make the rear look neat Bulleteer customs have replaced the stock taillamp with a LED light strip. The custom Himalayan also gets a custom rugged crash guard as well that will protect the body panels from getting damaged during a crash. Lastly, it also gets a high mounted aftermarket exhaust with heat wraps.

The motorcycle has been finished in a special Military Green paint and the rest of the chassis and engines is blacked out to give it a mean and stealthy appearance. Bulleteer customs have taken two months and about one lakh rupees to complete the entire project.