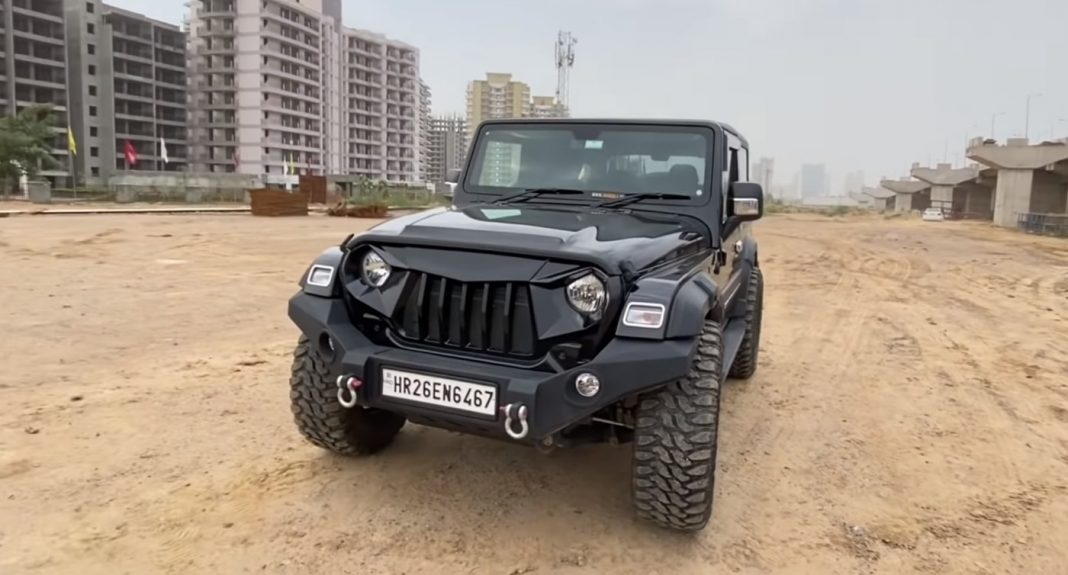 Last year, the second-generation Mahindra Thar was launched in India. It’s the most affordable 4×4 vehicle in our market currently, and thus it’s extremely popular among off-road enthusiasts in our country. The Thar is also popular among custom-builders, and despite being on sale for less than a year, we’ve seen hundreds of modified examples of it on the roads.

The customised Mahindra Thar featured here sports a lot of off-road upgrades, like a set of massive 35-inch mud-terrain tyres shod on 18-inch blacked-out alloy wheels. The video below, by unnu rao, gives us a close look at the vehicle. The stock front bumper has been replaced by an off-road unit, which gets two tow hooks at the front and an integrated bash plate underneath.

The SUV now sports an angry bird front grille, which looks extremely aggressive. The bumper was priced at Rs. 23,000, while the grille was Rs. 9,000, both installed by Bimbra 4×4. The tailgate-mounted spare wheel is also the same 18-inch alloy rim and 35-inch tyre combo as the rest. This is interesting, as shops usually sell these a set of four only, and procuring a spare is difficult.

The cost of all five wheels and tyres has been reported at Rs. 1.8 lakh. Apart from that, this Thar also gets a few official chrome accessories, worth Rs. 70,000, like the DRL/turn indicator surrounds on the front fender, taillight appliqué, ORVM chrome inserts, etc. The interior of the vehicle doesn’t feature any aftermarket bits, although the owner does mention in the video that he has plans for further modifications.

No changes have been made to the powertrain of the vehicle. Mahindra Thar is available with two engine options in the Indian market. The first one is a 2.0-litre turbocharged petrol motor, which develops a peak power of 150 PS and a maximum torque of 320 Nm (300 Nm on MT version). The second one is a 2.2-litre turbocharged diesel mill, which belts out 130 PS and 300 Nm. 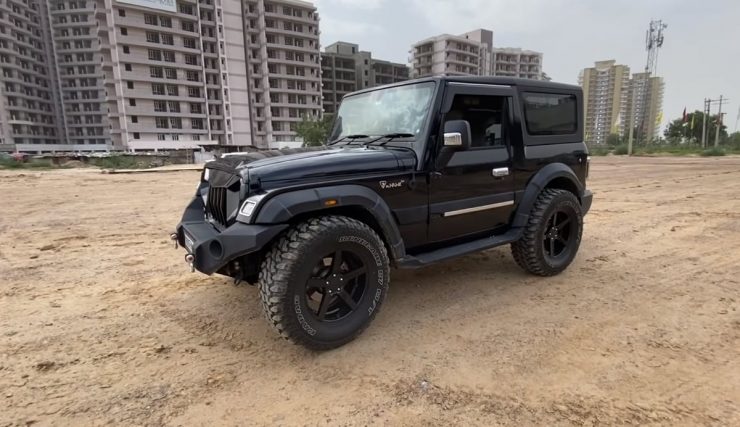 Transmission options consist of a 6-speed manual and a 6-speed torque-converter automatic gearbox, and both come standard with a shift-on-fly transfer case (with three modes – 4 low, 4 high, and 2 high). Mahindra Thar is currently priced from Rs. 12.11 lakh to Rs. 14.16 lakh (ex-showroom) in the Indian market.