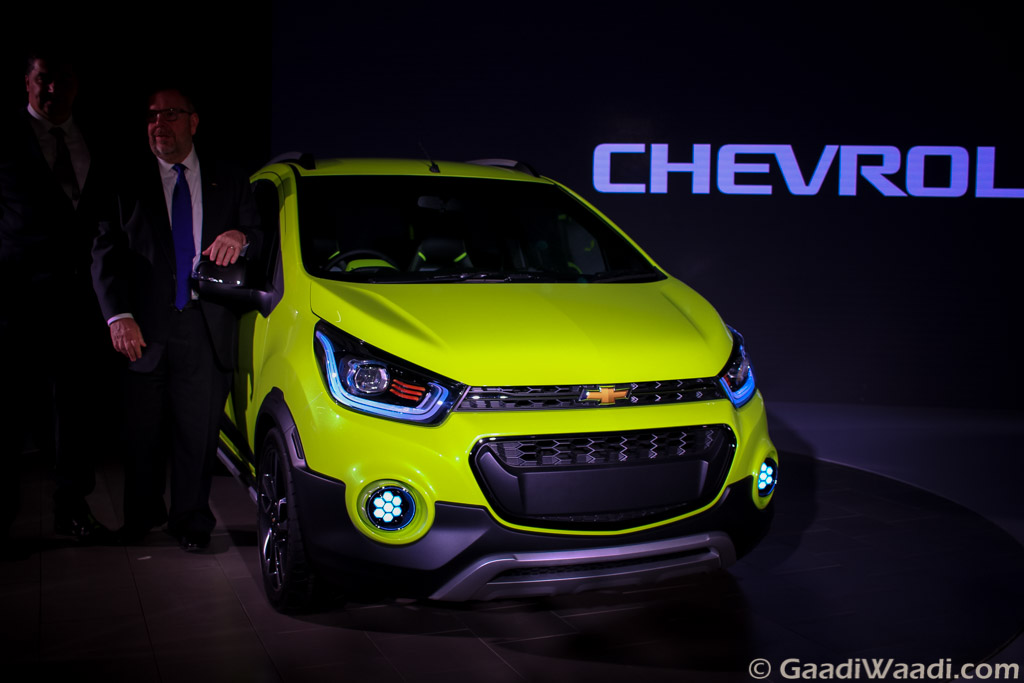 The Chevrolet Beat Activ crossover based on the Beat small hatchback is General Motors’ response to Hyundai i20 Active, Toyota Etios Cross and Fiat Avventura. It has been launched today at the opening media day of the 13th edition of the Indian Auto Expo hosted in Greater Noida. The crossover segment has boomed in recent times and Chevrolet wants to make its presence felt with this appealing new model.

Compared to the regular hatchback versions of its rivals which are targetted at slightly more upmaket buyers, the Beat is priced relatively cheap and thus the crossover could face a similarly aggressive price range. The sportier Chevrolet Beat Activ will be endeavouring to attract first-time young buyers with its funky overall stance. Both the Beat Essentia sedan and the Activ crossover have taken design inspiration from the new generation Chevrolet Beat that see the light next year in the Indian market.

The front fascia is fitted with a new signature dual-port grille sitting in the middle of larger elliptical headlamps on either side. They stretch all the way to the front fenders and the fog lamps have been made roundish. The Beat Activ gets roof rails as well alongside sloping roofline, hatchback-alike tail gate at the rear with an integrated spoiler and side profile in identical to the Sail duos. The interiors boast Chevrolet MyLink seven-inch infotainment system and colour-coded trim with trapezoidal air vents. The two engine options available on the Beat Activ are 1.2-litre SMARTECH Petrol and a 1.0-litre SMARTECH Diesel as similar to its hatcback sibling. The former is capable of generating 76.8 bhp of maximum power output and 106.5 Nm of peak torque whilst the diesel model is good enough to develop 56.3 bhp and 142.5 Nm of torque. Both the engines transfer power to the front wheels through a five-speed manual transmission.