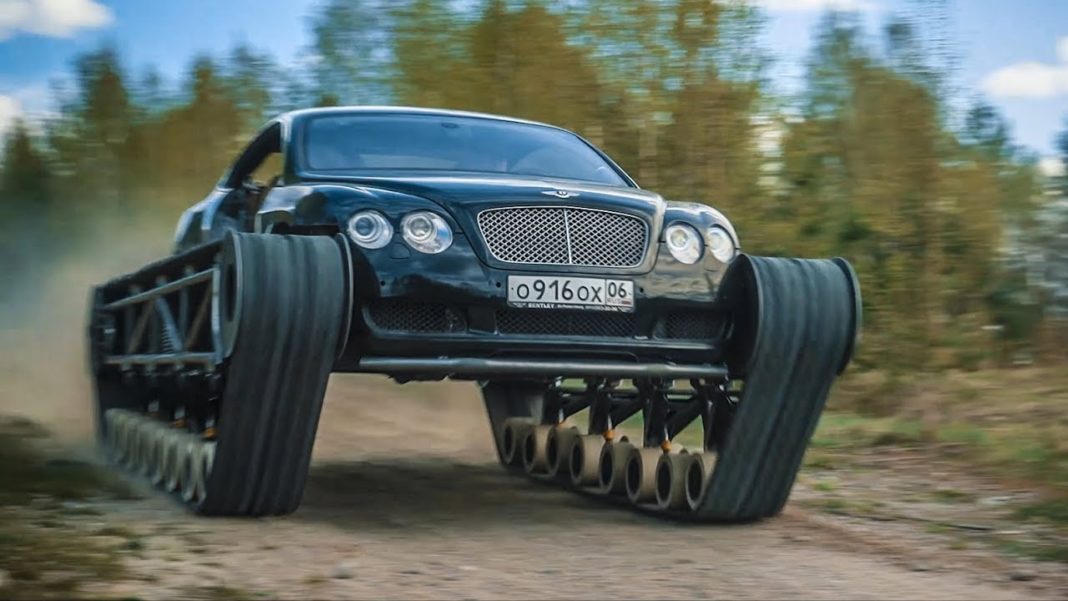 While it is not uncommon to see thoroughbred luxury SUVs like the Mercedes G-Wagen getting tank tracks, a similar treatment has been given to a Bentley Continental GT

The world of car modifications is a crazy place. No, we aren’t being negative about the tuned Mitsubishi Evos that belt out more than 2000 WHP, and we totally welcome even Indian vehicles, like the VW Polo, getting upgrades to bump up the total power. Well, we aren’t even dismissing this Bentley Continental GT that you see on this page but it’s just that right when we’ve thought we’ve seen it all, a new custom car comes out to totally blow our mind.

No, it’s not uncommon to see luxury vehicles getting tank tracks but it’s the likes of robust SUVs such as Mercedes G-Wagen that have been seen sporting the footwear of a small battle tank. The Bentley Continental GT is a thoroughbred high-performance luxury coupe that can easily take to some trans-continental cruising. Hence, the Continental GT and tank tracks make for the strangest bed fellows ever.

This Frankenstein of a Bentley Continental GT is the brainchild of a group of Russians. While we still find it a bit hard to figure out why anyone would want to use tank treads on the luxury GT, there’s no denying the hard work that has gone into the creation of this vehicle. The video we have here shows how this crazy machine works. The team calls it the Ultratank, which, we think, is actually the perfect name for this luxurious beast.

As seen in the video, the Ultratank can easily take on the steep grades and toughest of the off-road conditions. It even sounds really very good. The build shows that there are some finishing touches left. The major issue with the build that can be seen in the video is that there is not enough tension on the treads and this leads to tracks sliding off the vehicle on hard corners. Putting the treads back to their position is a lot of hard work, so, this is one area that needs to be addressed.

Also, the Ultratank have already given some upgrades for the powertrain. The creators want this modified Bentley Continental GT to be capable or racing a top speed of 62 miles per hour (100 kilometres per hour). Initially, it was restricted to just half at 31 mph (50 kilometres per hour). Now, however, it tops out at 81 mph (130 kmph). Well, it doesn’t look like the builders of this unconventional modification would have had any trouble bumping up the power output of this mean machine.

We are not sure about the model year of this Bentley Continental GT but for reference, the 2020 model comes equipped with a huge 4.0-liter V8 motor that is potent enough to support those heavy tank tracks. It outputs a maximum power of 542 hp, which is only a bit less than the 552 hp that the W12 engine of the original Conti GT developed. Also, the V8 engine has a massive peak torque of 770 Nm. The engine benefits from twin-scroll turbochargers. In the stock form, the Continental GT 4.0 V8 has a top speed of 200 mph (322 kmph).

Also, another flaw seen in this video is that the vehicle doesn’t have any doors. A direct issue arising out of this is that the occupants are subjected to all the dust. However, it is said that the car has now received the doors, which should also increase the efficiency of the aircon. As the video above shows, the Ultratank is one badass Bentley Continental GT for anyone who has been looking for a one-of-a-kind badass off-roader that is highly capable, very luxurious and has street presence like none other. Indeed, the world of car modifications is a crazy place, right?