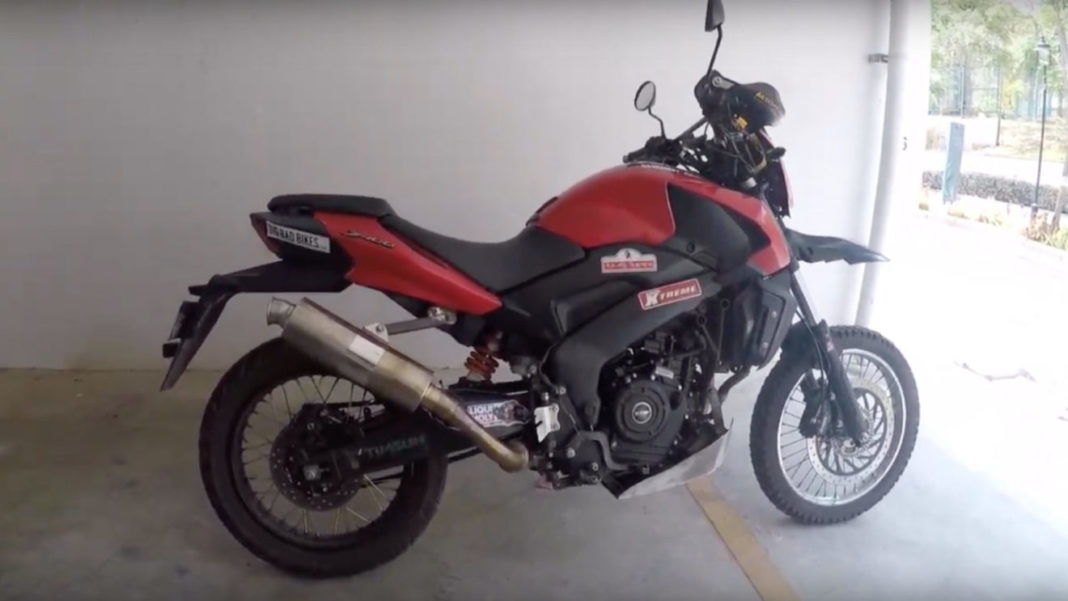 The bigger spoke rims, off-road tyres and new suspension setup have changed the appearance of the Dominar completely

The Desert Storm rally is not only the longest but is also the toughest amongst the North Indian rallies. For those of you who are not aware, the rally championship has different categories for 4×4 vehicles, cars, and bikes. All the vehicles participating in the rally need special preparation. In this video, you can watch a participant customized his Bajaj Dominar 400, especially for this rally championship. If you watch the video closely you will hardly be able to tell whether this is a Bajaj Dominar 400 or a completely different motorcycle or not.

The stock motorcycle has received a wide range of modifications to make it more durable, comfortable and tough. The good thing about this video is that the owners explain each and every modification that he made to the motorcycle in detail. The first and the biggest change that you will notice in the motorcycle comes in then form of new 18-inch spoke wheels at the front and a slightly smaller 17-inch spoke wheel at the rear.

The bigger wheels have also helped increase the ground clearance of the motorcycle as well. The stock tyres are also replaced with new off-road spec tyres that will provide more grip on the sand. To fit the larger wheels the front stock fender of the motorcycles has also been replaced with a raised offroad spec fender. The owner even replaced the stock LED headlamp unit of the Dominar with an aftermarket halogen unit.

To make the motorcycle comfortable for long tours the stock handlebar of the motorcycle is also replaced with a raised aftermarket unit. The handlebars also have been fitted with an aftermarket knuckle guard as well to protect the vital parts like the gear and clutch lever from breaking in case the rider meets with an accident.

To make the Dominar more comfortable the rider triangle has also been improved according to the owner’s preference. The stock footpegs too have been replaced with a custom spike unit (the spike pegs will offer better grip in case the rider decides to stand up and ride across the tricky sections).

Another important change that the motorcycle has also received comes in the form of a new suspension setup. The owner has altered the front springs and used fork raisers to increase the ride height of the motorcycle. The rear profile also gets a new monoshock unit which has been custom tuned to handle the weight of the rider as well as the motorcycle. Lastly, to protect the engine the owner has also installed a handmade aluminium bash plate. In order to reduce an additional weight the stock exhaust of the motorcycle has also been replaced with a custom exhaust unit (the custom exhaust made out of steel also has a throaty exhaust note).

There are no changes made to the engine though. The customized Bajaj Dominar is still powered by the same 373cc, four-stroke single cylinder, liquid cooled engine. This engine is capable of producing about 35 Bhp of peak power and 35 Nm of peak torque. The engine is paired with the 6-speed gearbox which sends power to the rear wheel.

The Dominar also gets a slipper clutch as standard. To maintain the same performance of the engine under immense heat the owner has also used Maxima 10W-60 oil in the motorcycle. Besides the new engine oil, the owner will also use a new coolant fluid to keep the engine cool and aftermarket brake pads for better braking performance.

The owner will also replace the stock fuel tank with a customized fuel tank unit as well later. He also has plans to install a 50 mm sprocket which will provide an additional low-end punch. The owner has also to fit two auxiliary lights which will offer better visibility, especially at night after the motorcycle’s wiring is finally sorted. The motorcycle is still under its final testing phase and that is also the reason why the owner has decided not to spend too much time and effort behind the appearance of the motorcycle.