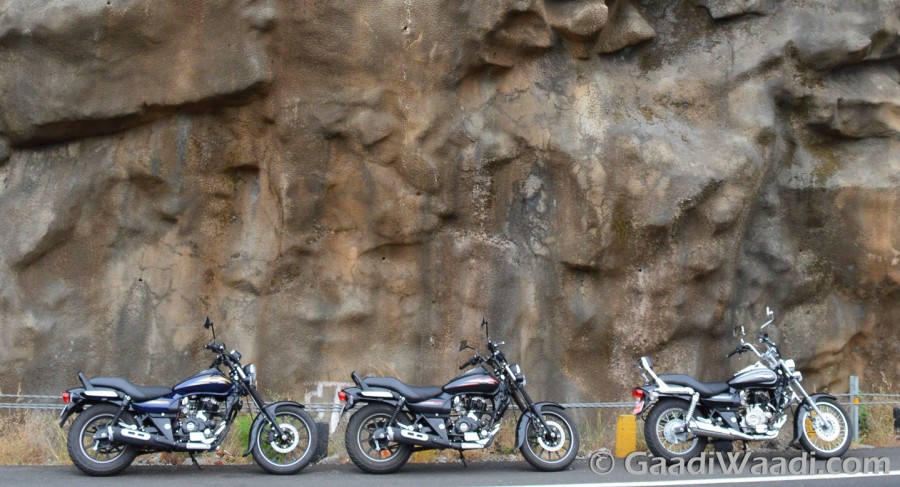 Bajaj Avengers always has been in the shadow of its successful siblings, but now it decides to step in daylight and blind its competition and make its presence felt

There was time in the year 2009, probably the last half of it. My friends were buying bikes as they just reached the licence ‘age’ and were done riding scooters and wanted something powerful. I was doing the same too. When i asked for a motorcycle i didn’t get much replies for a few weeks. Few weeks later, i started eating less dinner. Then we came to a conclusion that what i get is an Avenger. Son, “it is a low bike, its safe and looks nice and goes fast enough”. Friends told “it suits your built man” and said yeah yeah whatever!

I need a motorcycle let it be a 100cc. I ended up buying a Pulsar 135, but since then my eyes were set on the Avenger every time i went on the road or found something about it on the internet. Avenger i saw was a sensation while my intercity rides. I saw people riding in leather jackets and half faced ‘Harley’ inspired helmets along with big boots worn riders riding Bajaj Avengers. Despite the heat and traffic almost killed them, they wanted to flaunt their style and their red color Avenger, which was either a 180, 200 or the 220. 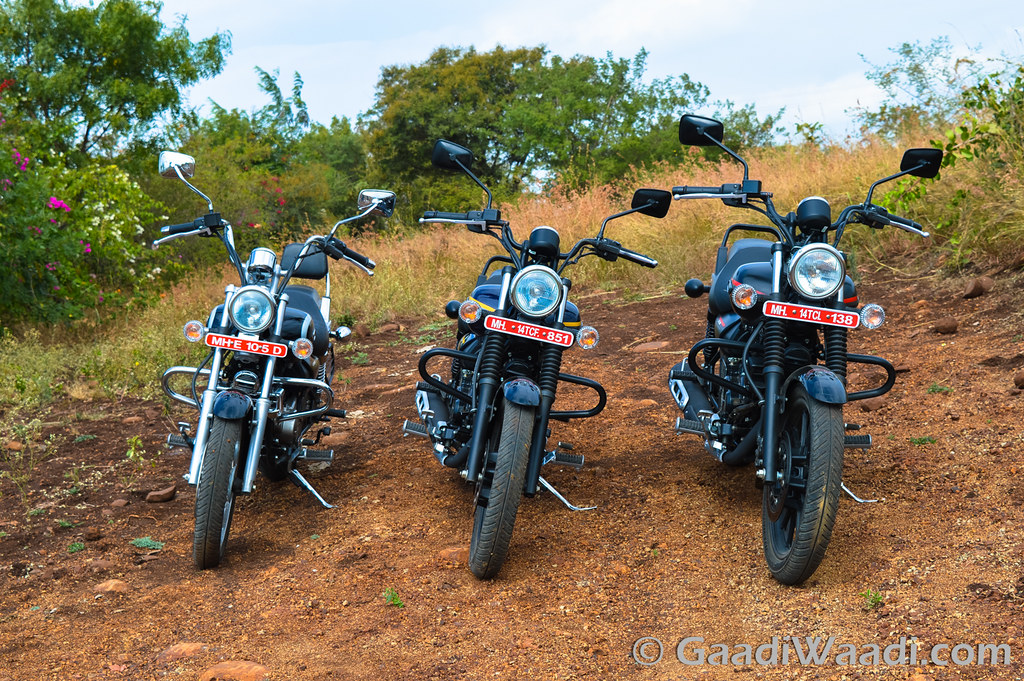 When I ended up meeting Bajaj for the first time i asked them what was the Avenger like in the Pulsar dominated sports motorcycle. They always said and keep saying it till date. The product owner is mostly a guy who takes his bikes on the weekend or someone who commutes from north to south in his city. Bajaj also said that they keep selling the same number every year and when i went for the new Avenger rides they said it again. 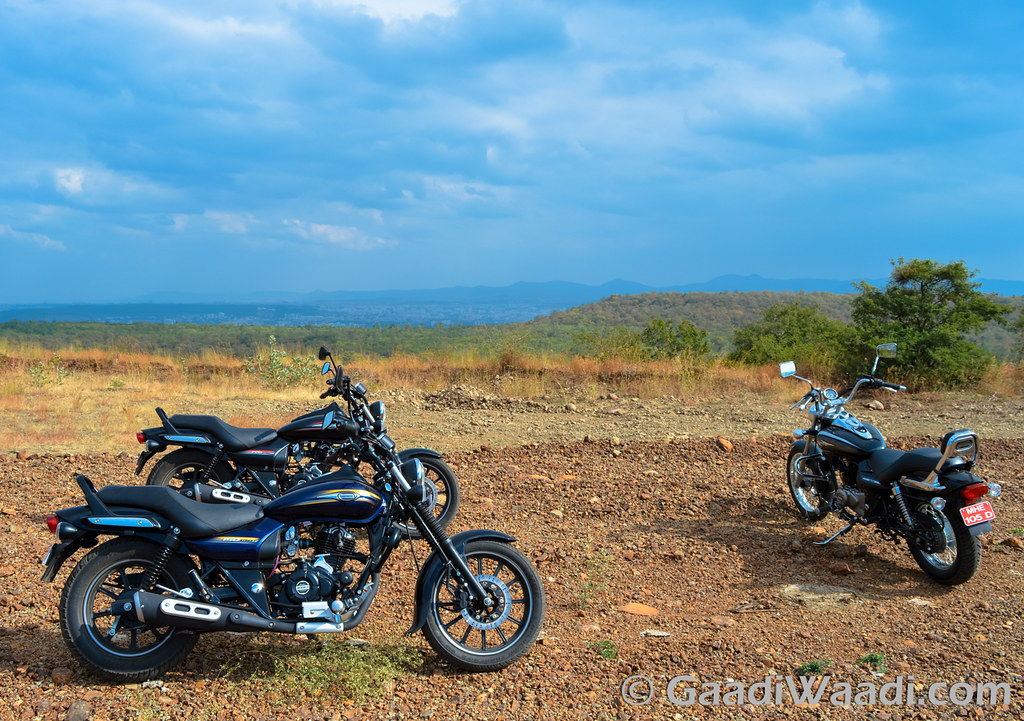 Avenger has been the bike which everyone liked. Case in my personal point, they didn’t want me to have a motorcycle. Because i was the kid whose relatives would complain to my parents saying that your son rides his cycle ‘very fast’. Hence, i was recommended an Avenger, its a safe bike, that’s what everyone thinks at first glance.

The Avenger owners are people who seek something different and now its time that even in the niche category they have created categories. Hence the much talked about Avenger 150 and Street 220 came to life along with the original Avenger 220 was called the Cruise 220. Cruise 220 should have been called Chrome 220 because there is so much chrome on it that you need sunglasses to look at it in the afternoon. 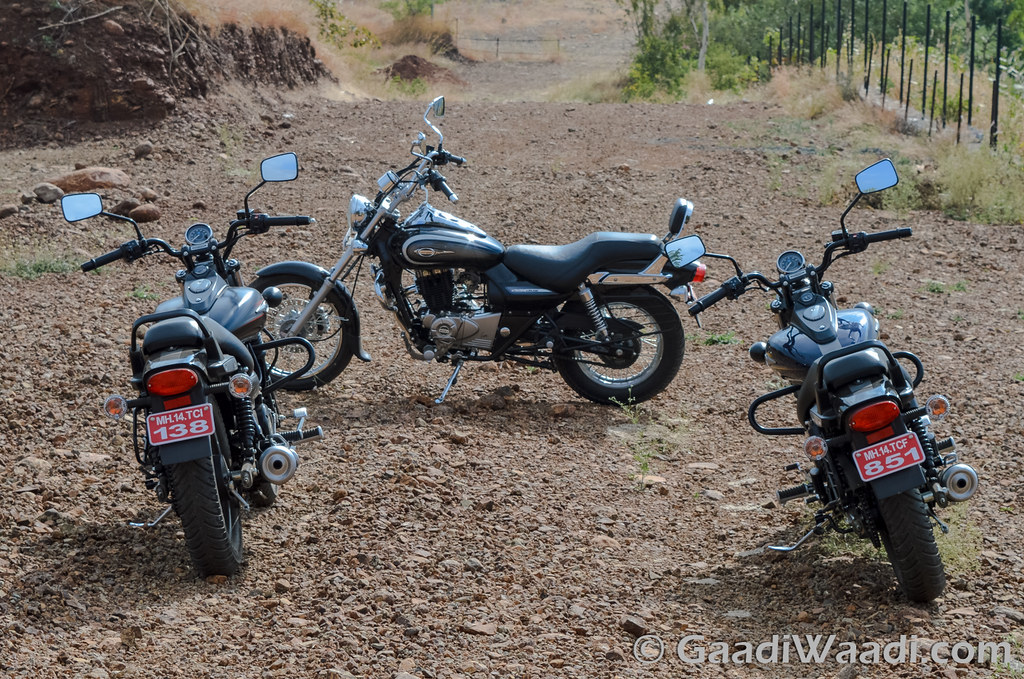 Avengers continues to be a safe option for the market and that is why Bajaj came up with not with refreshing one model, but made it into a series of motorcycles just like its Pulsar brand with minimum physical effort and a lot of brainstorming. Bajaj hopes to sell more than 20,000 units a month this time. Previously it never went above the 5000 mark. That’s a lot of confidence and it should be. Products are received well and we rode it to find out exactly the same.

When our team was riding the three Avengers side by side the reaction towards these bikes were the same as before. A calm and wide eye approach towards the cruisers. Motorcycles of any type riding in groups, always look cooler too. The Street 150 with its beautiful and we mean it, paint job and vinyl work is clearly accentuated cruiser profile to the very limit. Street 220 caught some serious attention. The Street 220 was already on the street in bulk a month before we test rode it. Cruise 220 is the bling king of this half decade. It has some serious eye catching potential and that’s what it did while we rode. The cruisers, to sum up, here shortly, as our road test are already being done is that these are precisely cut clothes.

Every inch is done with as much precision as a human eye can witness. Smoothly cut off silencers to fantastic paint and vinyl jobs. Tiny little details are well taken care off indeed. Sure, there are things still to criticize, but that’s the way people have liked it over the past decade and there haven’t been any complaints except refinement levels. 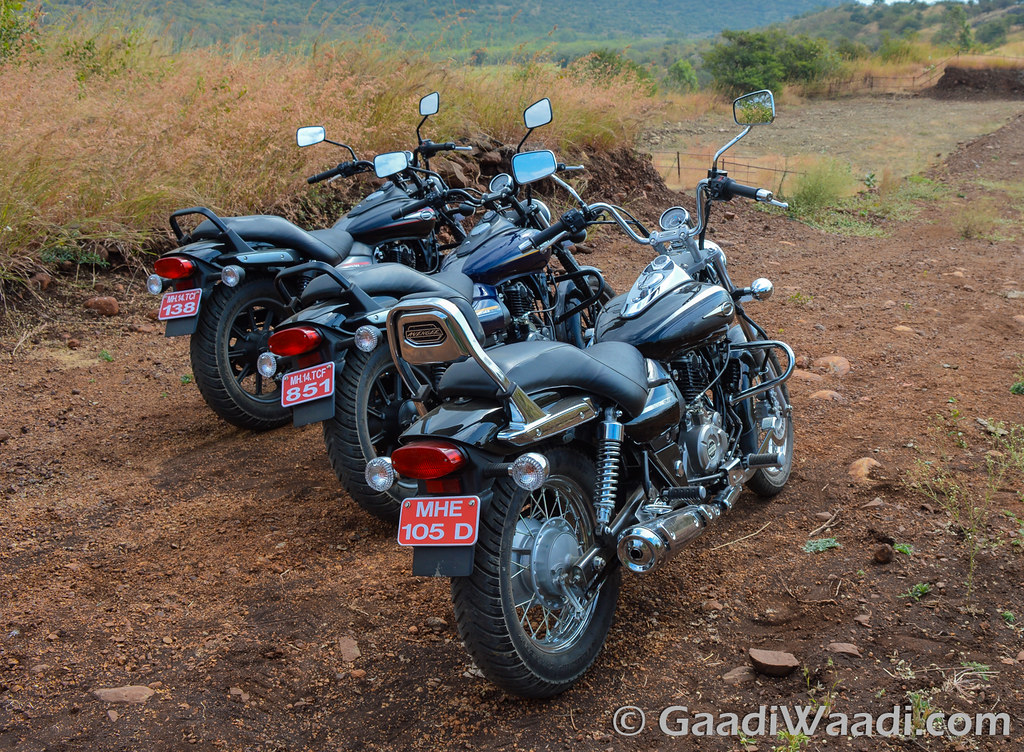 ‘Comfort’ has been the pinnacle for Avenger and it continues with all these three models, Cruise 220 is ideal for lazy riders even more. Comfort reminds us that the Avenger was meant to eat the miles of un-ending highways that we have. We did our 100 km short ride to and from on these bikes and it just went by in a flash.

The reason is because the wind and ease of riding cocoons you so well that you are bound to notice nothing while riding for even more kms than we did it. However, Performance increase was expected and Bajaj says that these aren’t sporty cruisers these are lifestyle and commuting units. So we can expect something enthusiast friendly in the future after all. Fingers crossed. 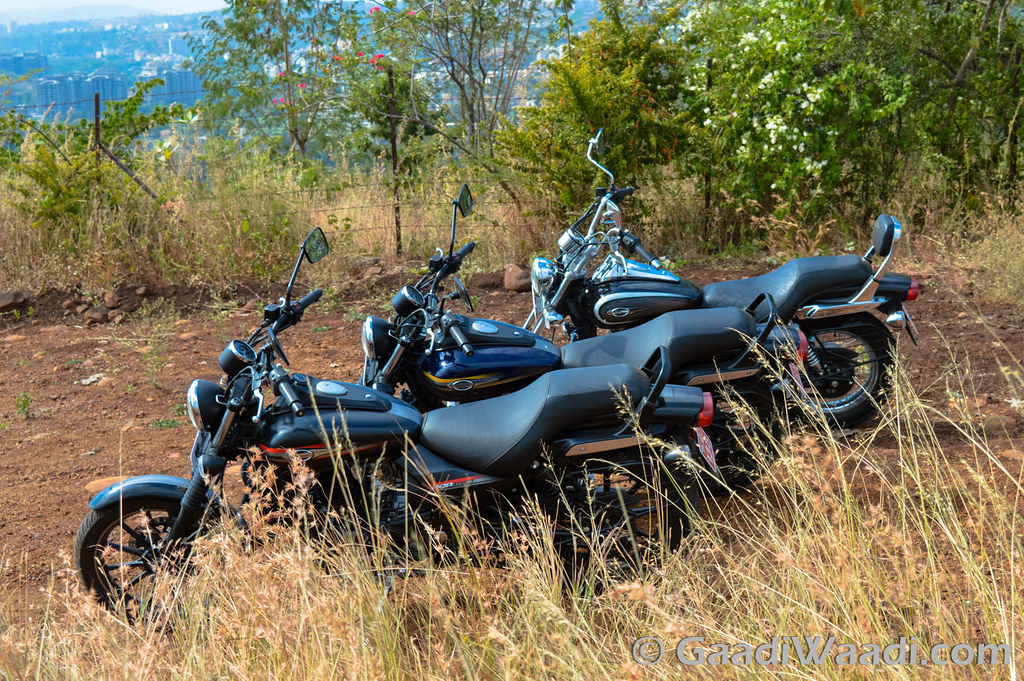 2005 saw Bajaj Avengers come to life and 2015 witnesses them in the most refined avatars till date. Bajaj has been working on refinement and quality lessons since the last half decade and it’s shows. 150cc engine just keeps getting better and better and hence almost 5 motorcycles from the stable itself have 150cc motor underneath their fuel tanks. 220cc engine is now very linear and hence the suspension now works better at the limit and in the corners. 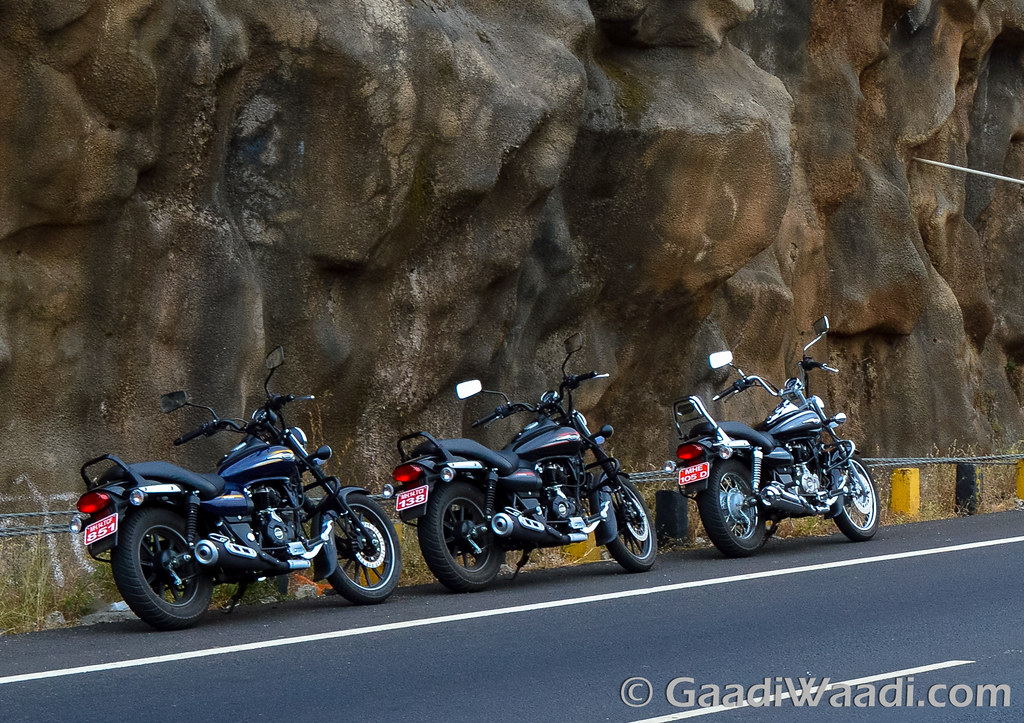 It’s been said that lifestyle motorcycles and scooters are bringing back the good old days of riding. Cafe racers, ‘cute scooters’ and major part of it has been cruisers. With the Avengers coming back and the old one’s identity staying pretty much intact, it should help manufacturer build up their numbers in terms of sales or profit. 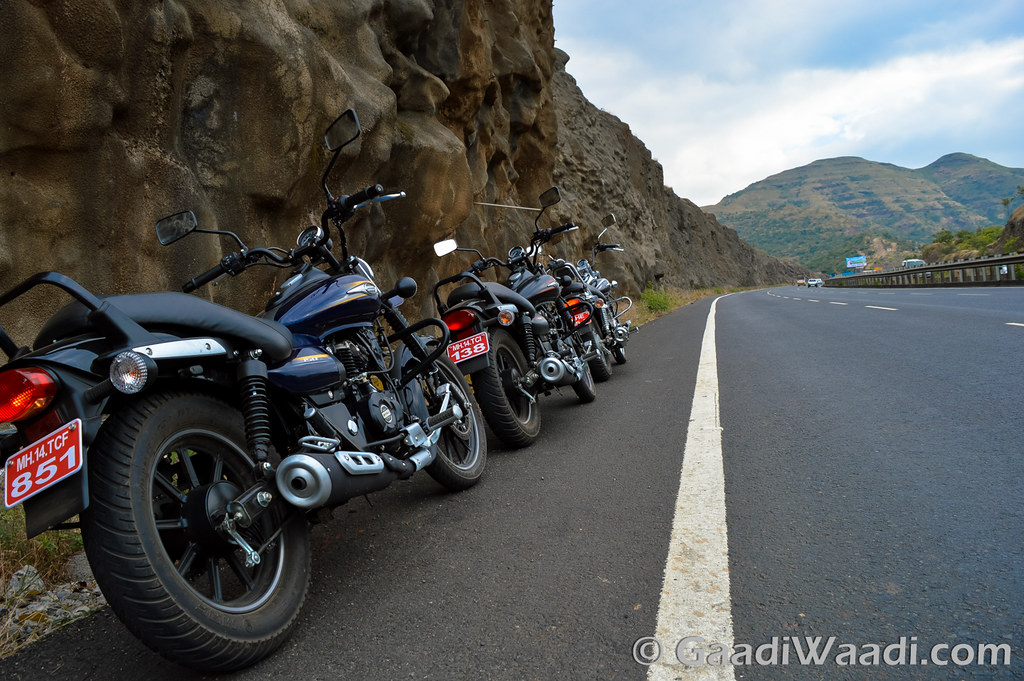 The market has changed and it happened so silently that for first two-three years or so, everyone failed to understand, but it’s catching up again. All because the niche products are coming back and the Avengers and other cruisers are surely. They cannot not be compared to the movie, but we can say that puny guy aka Hawkeye (Street 150) is key to success Black Widow (Street 220) will attract all men to the showroom and Iron Man (Cruise 220) takes all the credit. Jokes apart, no one can deny the time belongs to them and hence we call it The Avengers: Age of Cruisers.