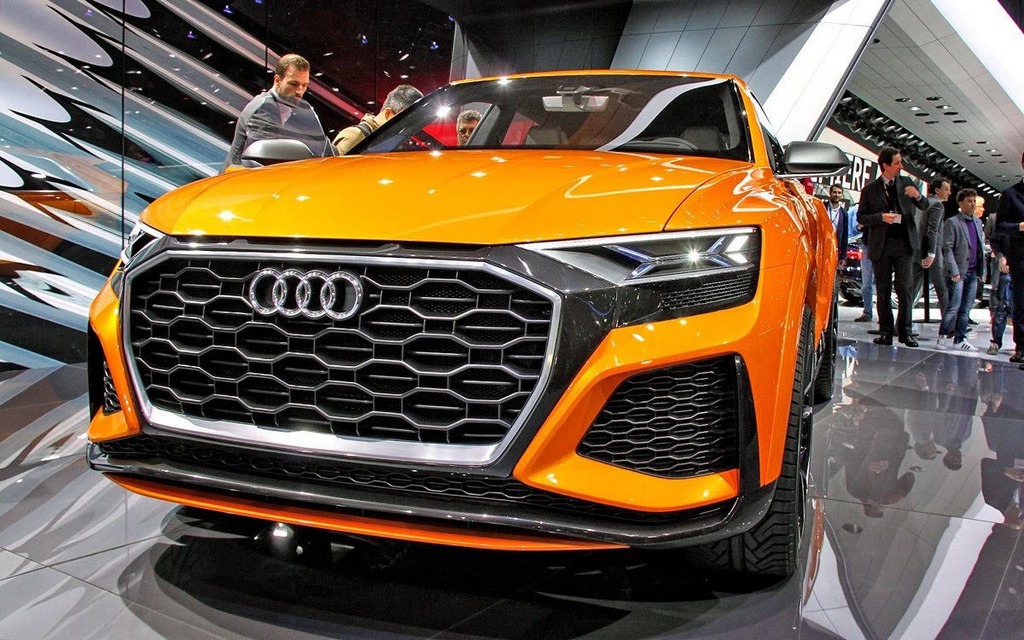 Audi will bring the new flagship SUV, the Q8 Coupe to India as early as the end of 2019 replacing the Q7 as its most expensive SUV offering

Audi India has announced to bring the Q8 coupe SUV, its latest and flagship SUV to the country this year and has been spotted testing on the domestic roads recently. Making its debut at the 2017 Detroit Motor Show as the concept model, it took 2 years for Audi to convert it to the production model and bring it to the roads. And now the Ingolstadt-based luxury carmaker is ready to launch its first-ever coupe-SUV in India. Here’s all you need to know about the Audi Q8 SUV:

The Audi Q8 will serve as the company’s flagship replacing the Q7 as the range-topping model in Audi’s Q line-up. The production version of the Audi Q8 carried forward most of the visual cues from the concept model that was showcased earlier this year at the Geneva Motor Show.

The Audi Q8 has 4,999 mm in length, 2,011 mm in width and 1,710 mm in height. This means Audi Q8 is wider, shorter and lower than the Q7, giving it a very sporty and planted look. The new Audi Q8 is built on the aluminum-rich platform that underpins the Audi Q7, Lamborghini Urus and Bentley Bentayga, which means the Audi Q8 will be lighter for better performance. 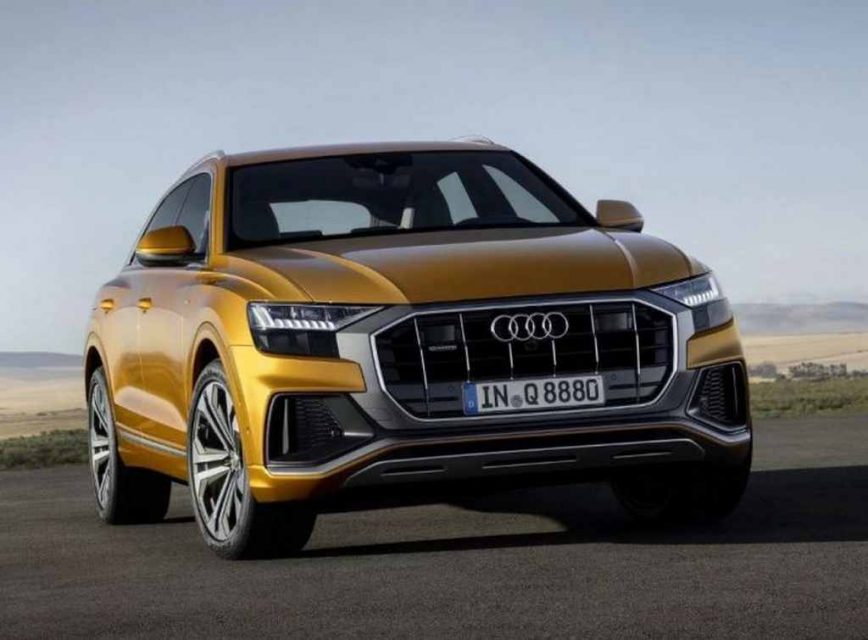 In terms of the looks, the Q8 gets a large single-frame grille with both vertical and horizontal slats and chrome accents giving it a broad look and the grille is flanked by sleek LED headlamps with HD Matrix LED technology and 3D daytime running lamps. The front bumper also has beefy skid plate, large air intakes, and sloping but prominent character lines adding a muscular look.

At the side is the sloping roofline that merges with the D-pillar, big wheel arches and large 22-inch wheels, giving a muscular, yet modern urban look. The rear section has wide connected LED taillamps with light strip giving it a single unit look, a roof-mounted spoiler, rear skid plate and styling inserts finished in dark chrome.

The cabin of the Audi Q8 is big with enough space thanks to the big body outside and has a five-seater layout. The dashboard gets an A8 inspired all-black layout with the piano finish and the centerpiece is the 10.1-inch MMI touch response display. 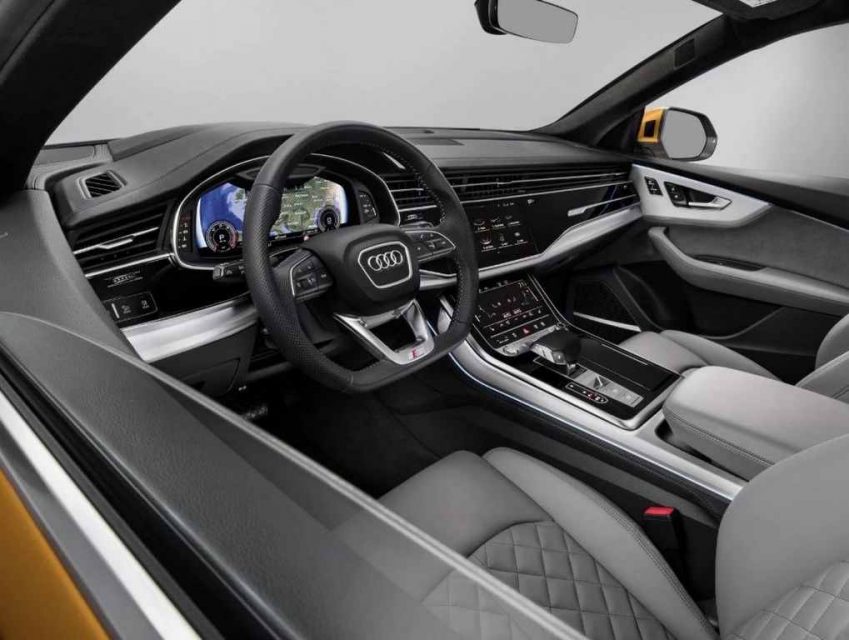 Audi has not given any physical buttons on the dashboard and there is another 8.6-inch digital display below for the air-con system and other in-car controls. The instrument panel is the trademark fully digital Audi virtual cockpit which is a high-resolution 12.3-inch display can be switched between two views via the multifunction steering wheel.

The Audi Q8 SUV-Coupe features a lot of technology like adaptive cruise assist, efficiency assist, crossing assist, lane change warning, curb warning and 360-degree cameras on the safety side and remote garage pilot that allows the car to park itself into a garage and back out again autonomously, and all can be done by the myAudi app on their smartphone. The cockpit can be used for the Audi connect data transfer module with the LTE Advanced standard and a Wi-Fi hotspot.

The Audi Q8 will be powered by a 3.0-litre V6 TDI engine in the Q8 50 TDI variant delivering 286 bhp and 600 Nm of torque and can be transferred to all the four wheels through an eight-speed Tiptronic automatic transmission and Audi’s Quattro AWD system. Audi will also add a less-powerful 3.0-litre TDI and a 3.0 TFSI petrol variant offering 340 bhp later. 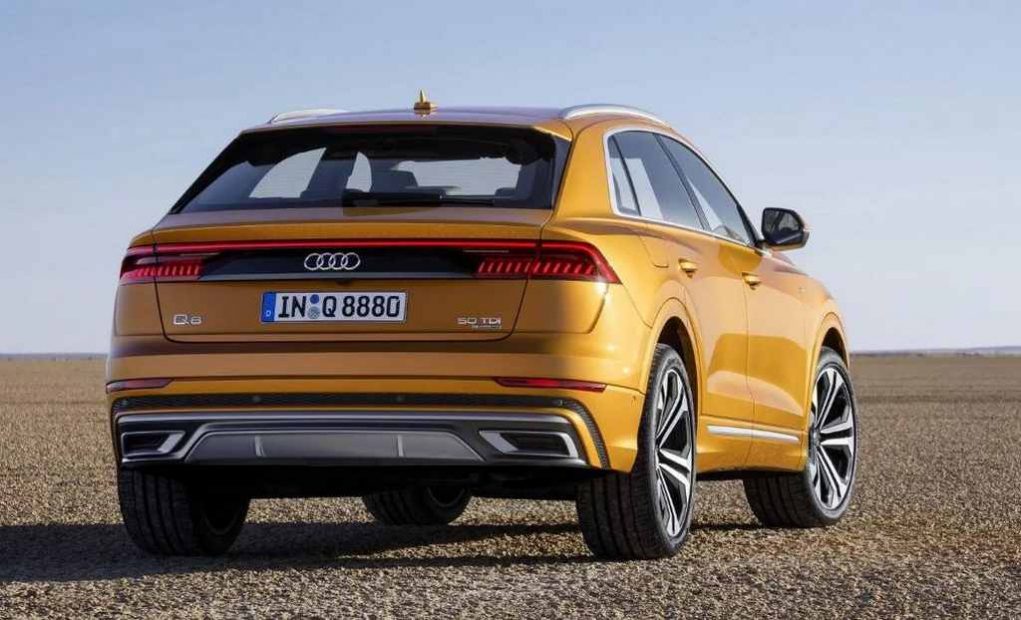 Both the engines will be mated to the same eight-speed Tiptronic automatic transmission and Audi’s Quattro AWD system. Audi might also add a hybrid unit in the Q8 to make it more relevant in the current times. The top speed of the Audi Q8 will be limited to 250 kmph.

Audi can launch the Q8 coupe SUV in India as soon as the end of 2019. However, given the current market scenario.Expect a price tag north of Rs 1 Crore (ex-showroom).