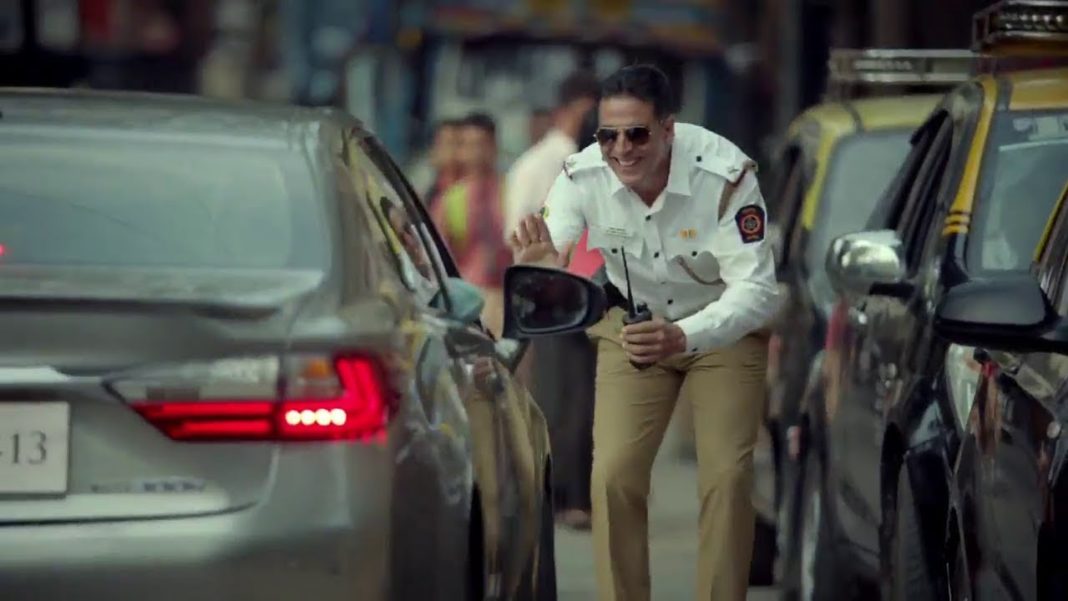 What happens when Akshay Kumar dons the ‘vardi’? No, we’re not talking about any Bollywood flick that shows the superstar playing the daredevil cop. Instead, here’s a short video clip that shows ‘seedhe-saadhe’ Kumar in the role of a traffic policeman. The video shows Akshay Kumar, whose new movie ‘Gold’ will launch tomorrow, telling a traffic violator – Ye Sadak Kisi Ke Baap Ki Nahi.

Actually, the famous Bollywood actor has teamed up with Road Transport and Highways Minister Nitin Gadkari to motivate road users to follow traffic rules. Talking about acting in the video clip, the actor said he wanted to do something ‘unusual’ to leave a lasting effect on the psyche of road users.

Akshay Kumar has set the Road Safety Week Campaign’s theme “Sadak Suraksha Jeevan Raksha” in a series of interesting videos that urge road users to respect traffic rules. In the video, the actor, who is dressed as a traffic policeman, flags a car that tries to turn into a ‘No Entry’ zone. The actor asks the driver if freedom fighter Lokmanya Tilak is his father as the road lane is named: “Lokmanya Tilak Road.” The dialogue between Akshay and the driver ends with ‘Ye Sadak Kisi Ke Baap Ki Nahi’.

In another development, Road Transport and Highways Minister Nitin Gadkari has come up with bravery awards for people who help accident victims. Gadkari has said it pains him to see “more people killed on Indian roads than in any war”. Hence, Akshay Kumar has been roped in to act in a series of videos that will encourage road users to follow traffic rules.

Speaking on this, Gadkari said,”We wanted to give a powerful message to the people as about 65 per cent of accident victims falls in the age group of 18-35 years.” The actor has acted in these videos without receiving any monetary benefits for his work.
This isn’t the first time that Akshay Kumar has worked for a social cause. His films like
‘Toilet: Ek Prem Katha’ and ‘Padman’ focus on some serious social issues.