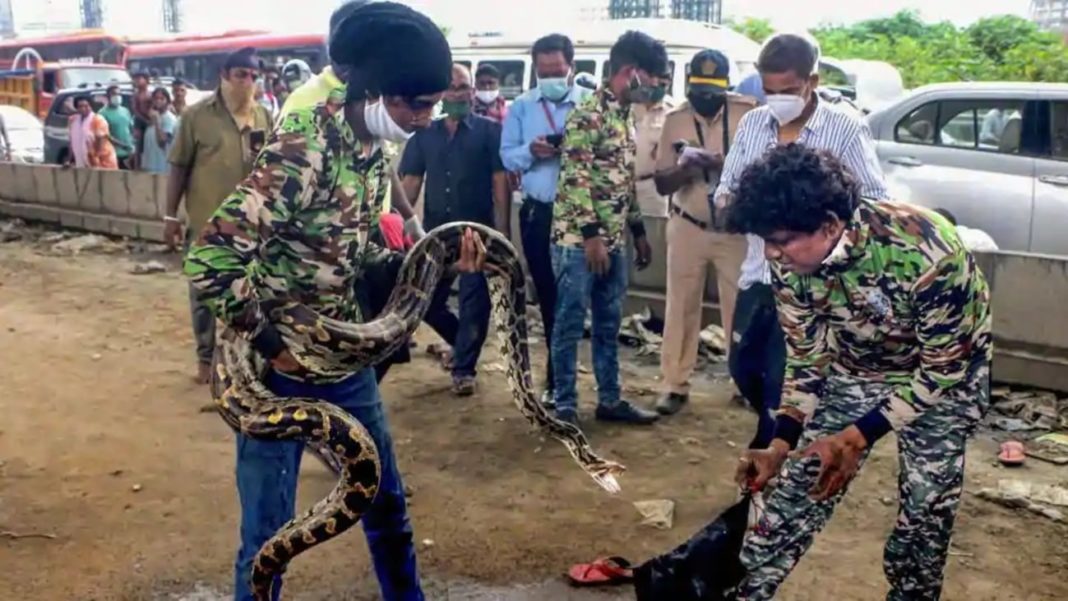 In a recent incident on Eastern Express Highway, Mumbai, a python tangled itself on to a car, resulting in a massive traffic jam

Indian roads are infamous for being unsafe, primarily due to all the potholes, unmarked speed-breakers, and even other road users, who take liberties with safety just to cut a few seconds from their commute. Not only that, but we also share our roads with animals. While usually such animals are limited to our usual stray cows and dogs, sometimes we come across a few wild ones as well.

On 21st September, during the morning hours, a 10-feet long snake was spotted on the Eastern Express Highway, near Chunabhatta area of Mumbai. Scared motorists came to a halt as they saw the snake slither across the road. After crossing the highway, the snake hid under a Maruti Suzuki Dzire, wrapping itself around one of the tyres. The police soon arrived at the spot, and blocked one lane of traffic to allow space for rescue work.

An animal rescue team later arrived at the spot and set to work. After almost half-an-hour, the team managed to untangle the python and save it. The reptile was later released safely into the wild. Thankfully, nobody was harmed during the incident, neither the animal nor any human being.

In the video, we can see that even though only a single lane was blocked, it managed to create quite a huge traffic jam on the busy highway. The police on the scene were busy managing the traffic flow. An animal rescue official can be seen wrestling the snake, trying to pull it out. The python is not a venomous snake, and hence, we see the rescue team come in close contact with it.

Instead of a venomous bite, pythons wrap around their prey and suffocate them to death. As such, they have strong body muscles, which is why the team had to struggle a lot of pull the snake from underneath the Dzire.

During monsoon season, it is common for wild animals to accidentally wander on to civilisation, in search for food. A vehicle’s engine bay is usually quite warm, which also attracts animals during cold rainy days. If you spot a snake, regardless of whether its venomous or not, always call the authorities.