5-Door Mahindra Thar is expected to make its domestic debut sometime later next year or in early 2024; will take on the upcoming five-door Maruti Jimny and Force Gurkha

Mahindra has been testing the five-door version of the second-generation Thar for months now and speculations surrounding its market launch have varied in recent weeks. While the brand has not officially revealed a timeframe yet, we do expect the extended wheelbase version to make its debut late next year or in early 2024 in India.

Upon arrival, the five-door Mahindra Thar will compete against the five-door Force Gurkha and Maruti Suzuki Jimny five-door. While the bigger Gurkha will be launched soon, Maruti Suzuki’s five-door Jimny will likely be unveiled at the 2023 Auto Expo next month featuring alongside the Baleno-based compact crossover codenamed YTB.

Thus, the five-door Mahindra Thar could be the last to arrive amongst the trio. For those who cannot wait, here we have a set of spy shot based 3D renderings of the lifestyle off-roader showing you an almost accurate way of how the production model could look like. Courtesy of a roomier cabin, the upcoming SUV will appeal to a wide range of buyers. 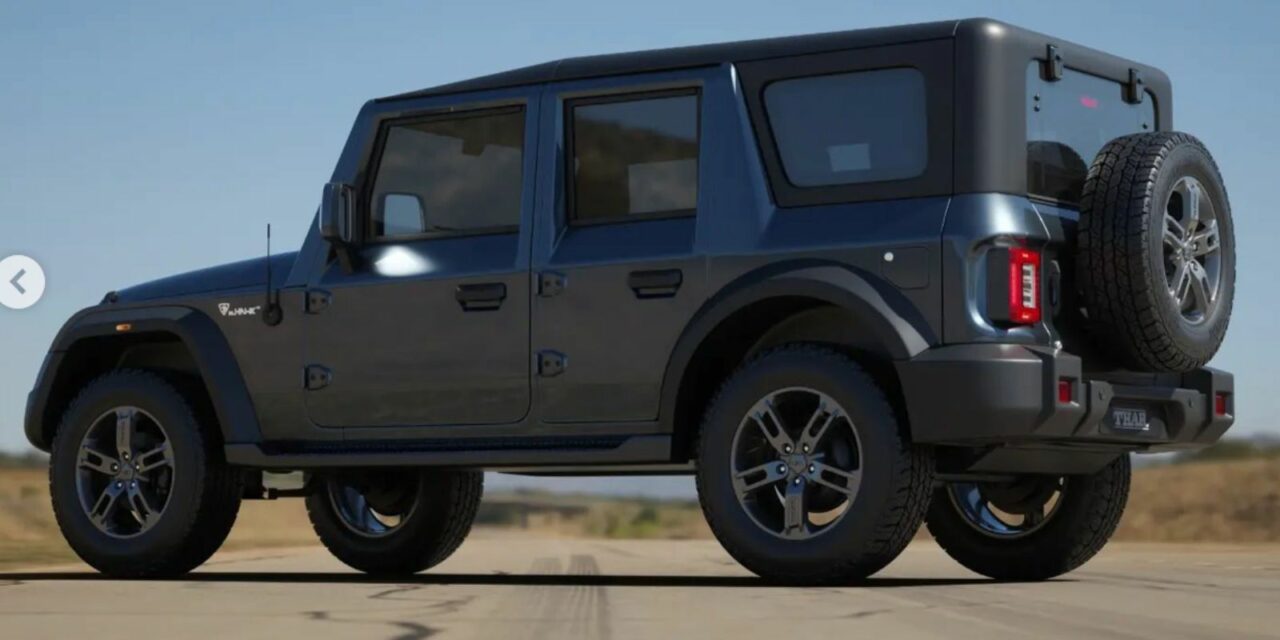 In addition, it could get new body panels and the overall width could be increased slightly as well compared to the existing three-door Thar as Mahindra might increase the track between the wheels to maintain optimum stability. It will also have longer rear doors and could be offered in multiple roof configurations.

It will have commonalities with the Scorpio N as far as underpinnings are concerned. However, the signature design elements like the upright front fascia, near-flat roofline, tall pillars, slightly raked front windshield, flared wheel arches, squarish LED tail lamps, spare wheel mounted on the tailgate, etc will remain similar to its three-door sibling.

Stretching the wheelbase would reduce the breakover angle as well and thus the off-road capability could be slightly impacted but we cannot get to a conclusion just yet. As for the performance, the same 2.2-litre four-cylinder mHawk diesel and the 2.0-litre four-cylinder mStallion petrol engines will be utilised but their outputs may differ.