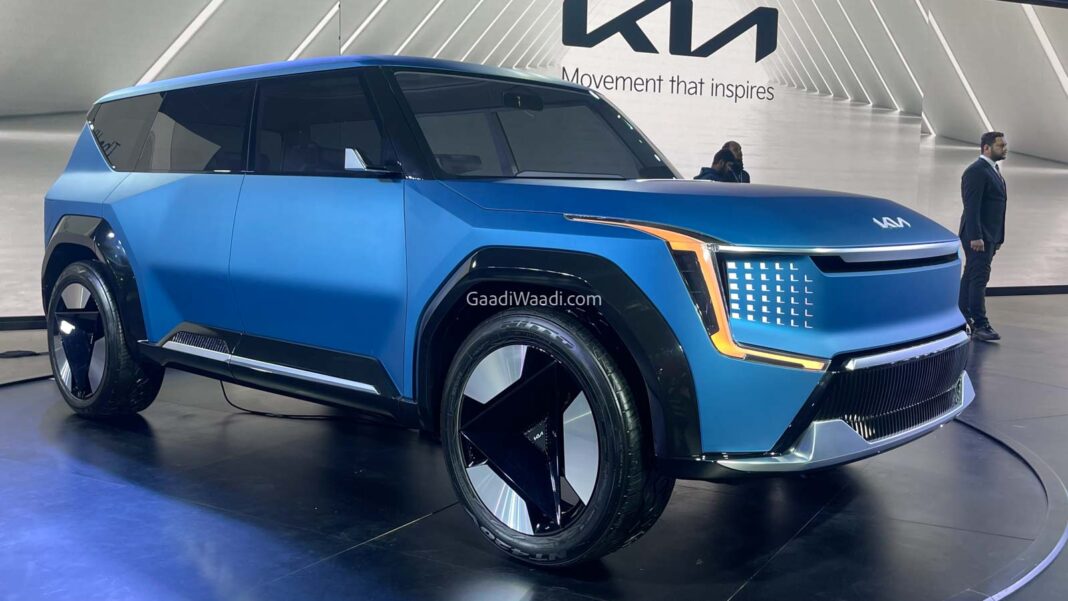 At the 2021 AutoMobility LA in November, Kia unveiled the EV9 concept and it has now been showcased at the ongoing 2023 Auto Expo in Greater Noida. The Kia EV9 will spawn a flagship three-row electric SUV in the coming months in the international markets and it has already been shown in its final production form. In a similar fashion to the EV6, which is also displayed at Kia’s pavilion, the EV9 concept sits on the Electric Global Modular Platform (E-GMP).

Based on the ‘Opposites United’ design philosophy, it boasts striking visual aesthetics in bold form with rugged features and styling cues including a futuristic digital Tiger Face facade. The grille houses an intricate star cloud pattern display hidden behind the body panel paying homage to the natural world and creating sequential patterns. The star cloud pattern inspired Kia’s design team to create standout vertical Daytime Running Lamps (DRLs) for both the front and the rear.

A new air vent design, retractable roof rails and the hood vent duct area utilized as a solar panel are other exterior highlights of this innovative concept. Kia says the concept offers extensive tech capabilities and all around flexibility ensuring that it feels at home when tackling traffic in densely populated urban areas. 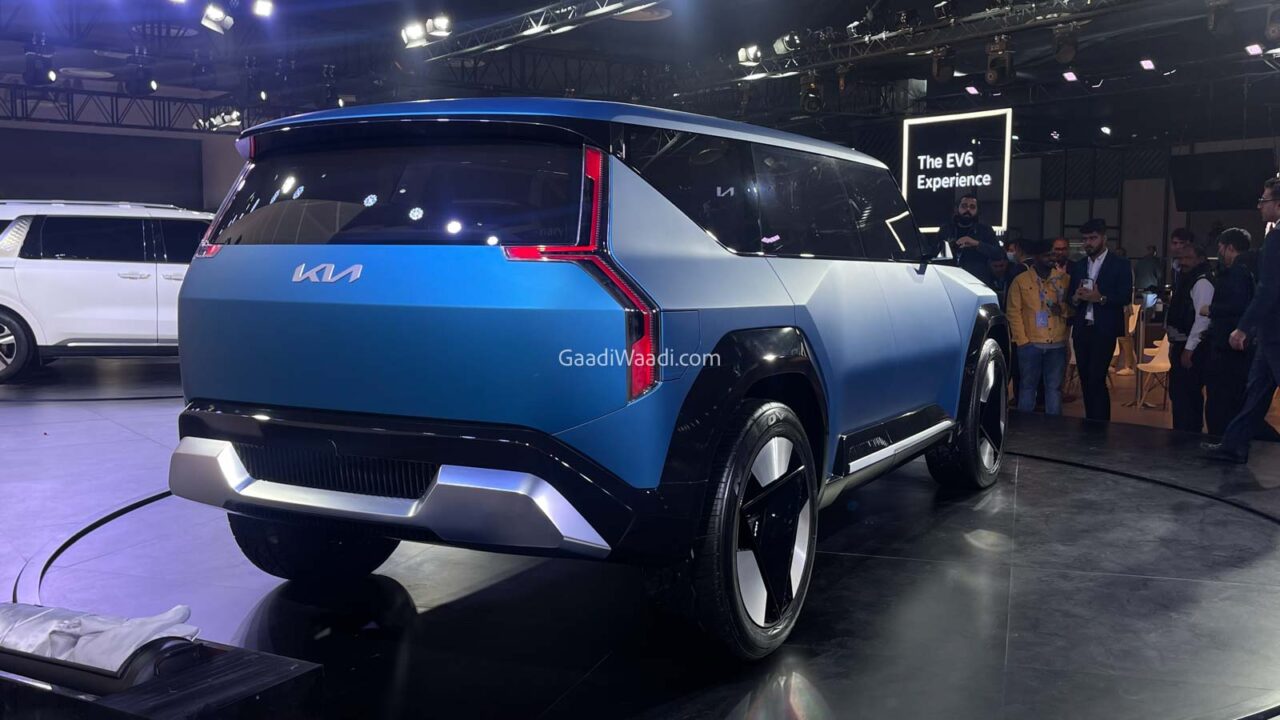 It also offers families the freedom to experience leisure pursuits away from city centres. The D-pillar design also creates a unique Daylight Opening (DLO) signature and is accompanied by machined 22-inch wheels, a triangular aero design piece for controlling the airflow around the wheel, a sleek glass structure, etc.

The cabin gives a first-class lounge feel with a panoramic roof, and an interactive 27-inch ultra-wide display acting as the nerve center for media, climate control and comfort functionality features. The high-tech, family-friendly vehicle is powered by an all-electric powertrain, and it blends an awe-inspiring exterior profile with a modern and sleek interior space. 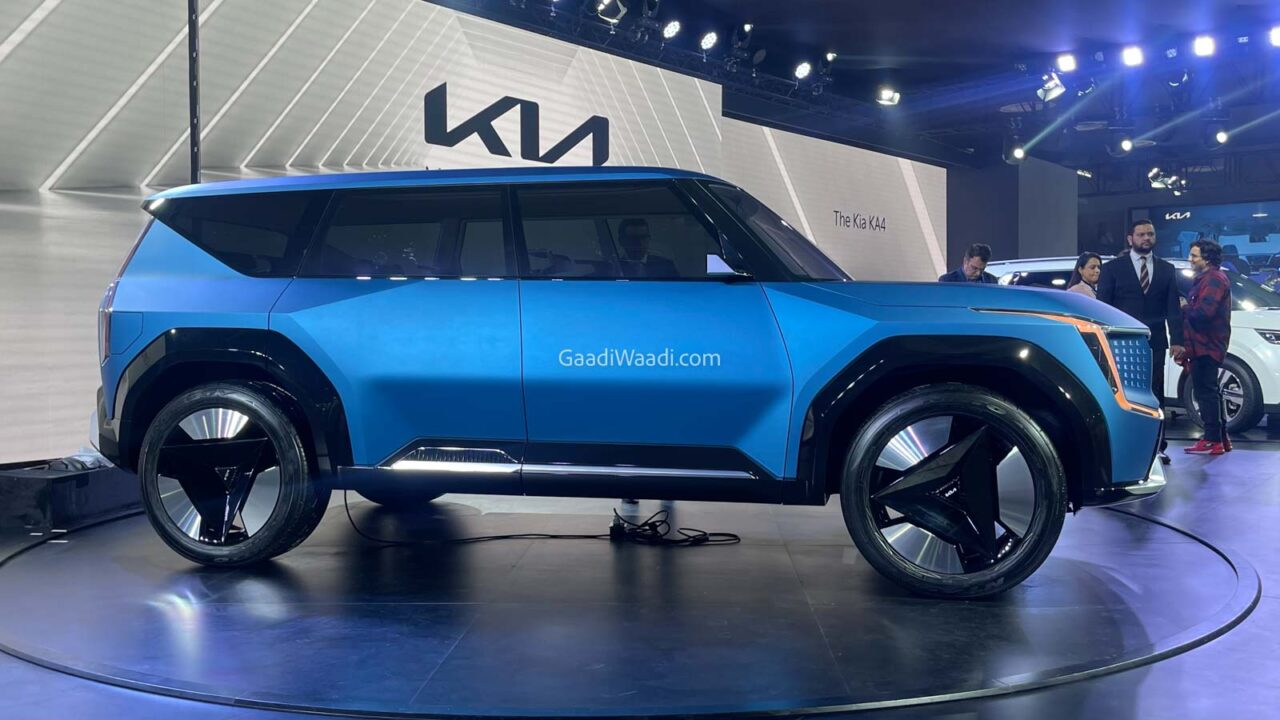 The modernistic angular profile can be seen from the sides along with sharp crystalline-inspired fenders. It measures 4,930 mm in length, 2,055 mm in width and 1,790 mm in height and has a wheelbase of 3,100 mm. The Kia EV9 concept is said to deliver a driving range of up to 482 km on a single charge and is equipped with ‘next-generation ultra-fast’ charging technology with a 350 kW charger allowing its battery pack to replenish energy from 10 per cent to 80 per cent in 20-30 minutes.