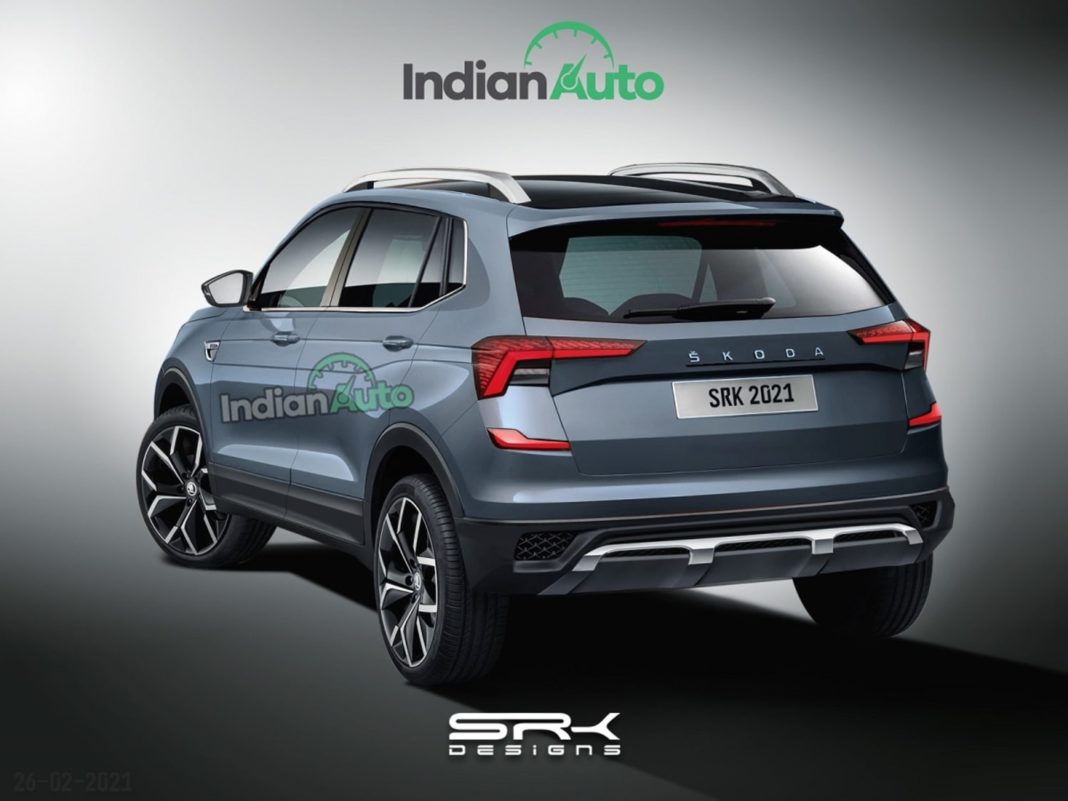 Check out this digitally rendered image, which imagines the rear three-quarter section of the upcoming Skoda Kushaq in final production from

Skoda is all set to debut the new Kushaq SUV on 18th March 2021, with the launch scheduled to happen midway through this year in India. Recently, the Czech manufacturer released the official design sketches of the upcoming SUV, and digital artists took the opportunity to create digital renders based on it!

Here, we have a digitally-rendered image of the rear-quarter section of the upcoming Skoda Kushaq, designed by Shoeb R Kalania of IAB. In the picture, we see that the Kushaq gets L-shaped taillights, inspired by other Skoda vehicles, like the Scala and Kamiq. We also see a pair of reflectors, each placed below a taillight, and ‘SKODA’ lettering on the tailgate. The rear bumper gets a silver-finished bash plate, along with air vents at the sides of the bumper.

We also see black plastic cladding along the sides and on the wheel arches, and the SUV sports a set of beautiful dual-tone alloy wheels. The windows get chrome lining, and roof rails have been added to the blacked-out roof. The vehicle also gets a roof-mounted spoiler, body-coloured, which looks quite cool. The production-spec Kushaq might end up looking a little different, but this rendering shows us what to expect.

Skoda Kushaq will be available in India with two engine options. The first one will be a 1.0-litre, turbocharged, inline-3 unit, capable of generating 110 PS and 175 Nm of peak power and torque, respectively. This motor will be offered with two transmission options – a 6-speed manual and a 6-speed torque-converter automatic gearbox.

The second engine option is a 1.5-litre, turbocharged, inline-4 petrol mill, which can develop 150 PS and 250 Nm. It will be available with a 6-speed manual transmission or a 7-speed DCT. Skoda Kushaq is the first vehicle to be built under the VW group’s India 2.0 project, and it will be underpinned by the India-specific MQB A0 IN platform.

Upon launch, expected to happen around mid-2021, Skoda Kushaq will go against the likes of Hyundai Creta, Kia Seltos, Renault Duster, etc., in the Indian market. Also, Volkswagen is currently working on a new SUV, named Taigun, which will share its architecture and engine options with the Kushaq.