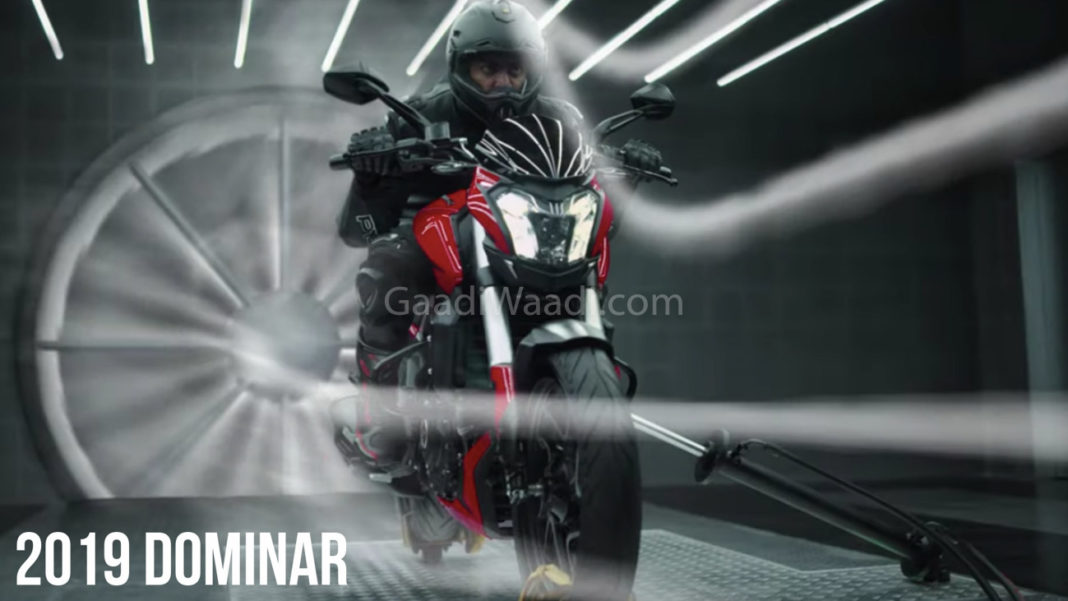 For those of you who are not aware Bajaj has already launched the updated 2019 Dominar 400 recently in India. There is no doubt that the motorcycle has received a significant amount of cosmetic and mechanical updates. Unfortunately, it was launched with just two colour options – aurora green and vine black.

Its predecessor, on the other hand, was available in four colour options though. The good news is that Bajaj has now revealed two new colour options for its flagship offering via their new commercial. In this new commercial, you can watch the 2019 Dominar 400 in two new shades of a glossy red and matte silver make an appearance.

Towards the beginning of the video, you can watch the glossy red Dominar going through a wind tunnel test. Whereas later a pair of red and silver Dominars can also be seen being ridden through forests and also on the tarmac road. That said, it is still unknown when exactly Bajaj will introduce these new shades of Dominar in the Indian lineup but we will definitely inform you when they are introduced here in the country.

Bajaj launched the 2019 Dominar 400 recently in India. It is powered by a 373.3cc, single-cylinder, liquid-cooled engine that now gets a DOHC set-up. This new unit produces about 39 Bhp of peak power (4 bhp more than its predecessor) and 35 Nm of peak torque. The unit is paired with a 6-speed gearbox.

The motorcycle also gets a new 43 mm USD front forks that replaced the conventional telescopic units. This suspension setup not only adds a beefy appearance but will also help in improving the ride quality at the same time. The rear profile, on the other hand, still uses the same mono-shock setup.

Although the cosmetic updates made to the motorcycle are subtle, it does feature a new double barrel exhaust now that promises a throaty and bass-heavy exhaust note. The LED headlamps towards the front of the motorcycle also get revised internals. The fully digital instrument cluster too has received some significant update as well, whereas, the secondary instrument cluster positioned on top of the fuel tank now provides more information to the rider. The Dominar 400 also gets a dual channel ABS as standard for the safety of the rider.