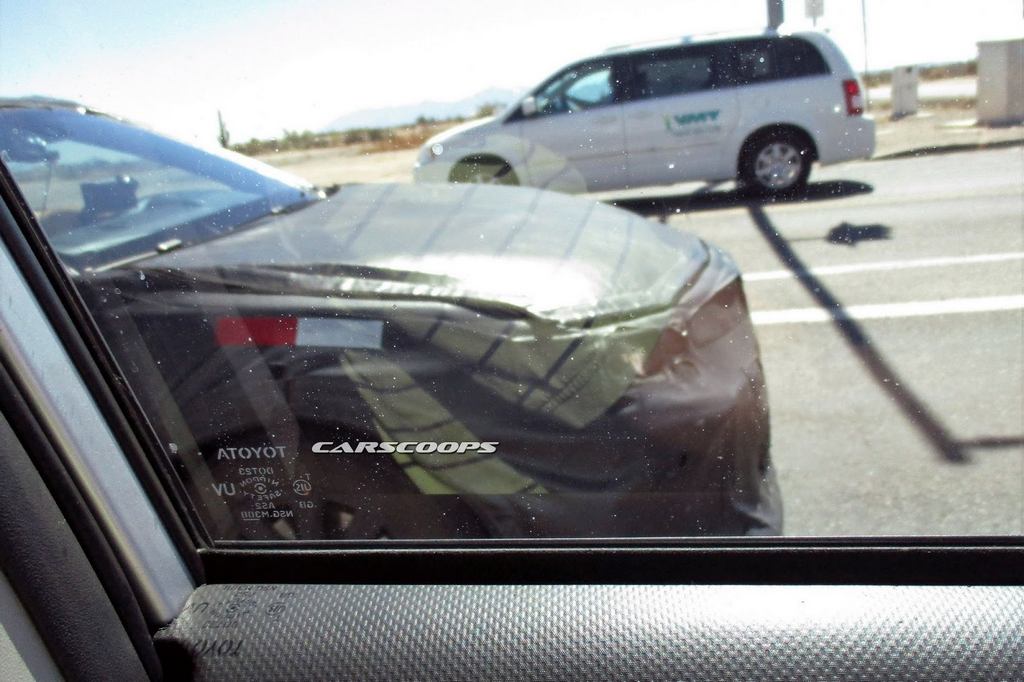 The upcoming generation of the Toyota Camry flagship sedan has been spotted testing by a Carscoops reader. He said the train of cars comprised of Lexus LC500 at front, two disguised Camry sedans in the middle and a Toyota Prius at the tail. It is a known fact that the Japanese manufacturer is preparing the eighth generation Camry for markets outside its home.

Toyota was in the headline a few days ago when the successor to the existing model’s front fascia was revealed unintentionally following an Instagram post of the Toyota Camry race car for the next NASCAR season. The Camry racer’s pointed nose is more likely to feature in the production version because it does form the frontal portion of the latest generation Prius. The other significant feature up front in 2017 Toyota Camry is a sharper headlamp unit which stands in line with the spotted test mule. The heavily cladded new generation Camry has the usual silhouette but it seems to be more streamlined with tapered shoulders and a newly styled rear end. Toyota could build the new Camry based on the lighter TNGA modular global architecture debuted in the existing Prius.

It is said to have better handling characteristics while being frugal. Sticking by the growing trend of powering the latest mid-size sedans with four-cylinder engines, Toyota could use a similar fuel-efficient powertrain. It will have an updated version of the 2.5-litre engine and a 2.0-litre turbocharged motor belonging to Lexus could be utilised in the range-topping variants. This means the heavier 3.5-litre V6 engine could be replaced and additionally a petrol-hybrid drivetrain could embellish the lineup. Toyota will have to dig deep for making the Camry a big hit because the mid-size family sedan sales have dropped despite the brand running strongly as the second largest automaker in the world. In the US, the current Camry’s sales was down by 8.6 percent at 2,66,746 units while the RAV4 registered 15 percent surge with 2,30,942 examples. It could overtake Camry soon which is the brand’s best-selling model for over a decade.