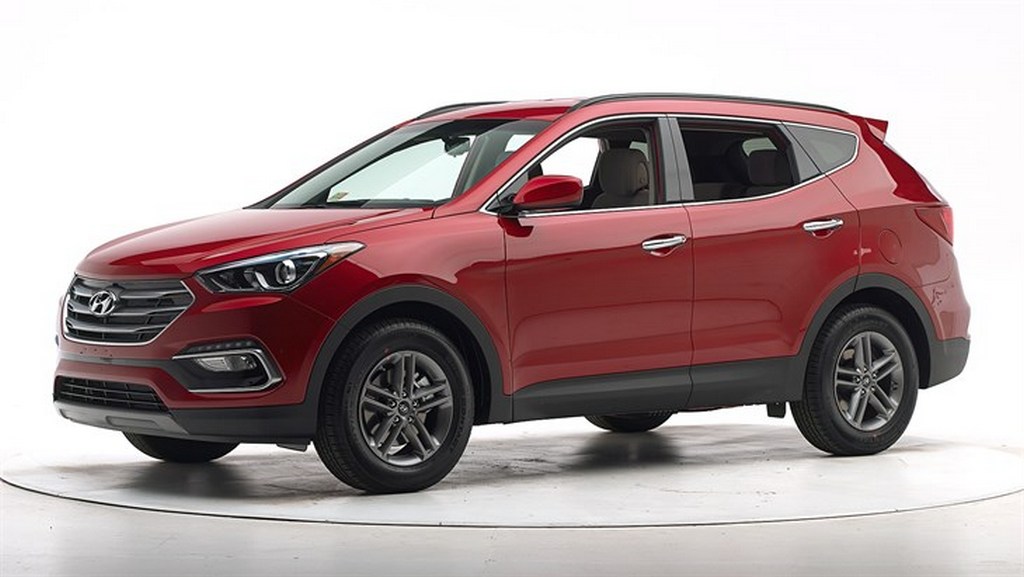 2017 Hyundai Santa Fe gets maximum rating from IIHS crash tests; the biggest improvement was made on small overlap testing

The South Korean automaker has given the Santa Fe sport utility vehicle a facelift for the 2017 model year and it has recently been treated to stringent crash tests framed by IIHS. The prior evaluations said, the biggest disadvantage the SUV’s predecessors between 2013 and 2016 had was the lack of protection in the event of small overlap crash test. But it has been addressed in the new model which was certainly awarded with the highly impressive Top Safety Pick+ rating.

Boosted with the additional protection, the IIHS (Insurance Institute for Highway Safety) marked down four inches maximum intrusion at the lower door hinge pillar and additionally the airbags and safety belt constituted in restraining the movement of the crash dummy during driver-side corner crash test at 64 kmph. This in turn earned the 2017 Hyundai Santa Fe a well-deserved Good rating. The safety institute stated that the previous version, earning Marginal rating, of the Santa Fe had extensive structural damage to the driver’s cockpit with intrusions as high as 10 inches at the lower door hinge pillar. Consequently, the dummy’s head had minimum contact with the front airbag before slamming on the left side as steering column moved five inches to the other side.

From further evaluations, the MY2017 Santa Fe was awarded Good rating in moderate overlap front, side and roof strength alongside head restraint and seats categories. For the optional front crash prevention system, it avoided collisions at speeds of 19 kmph and 40 kmph and had been ranked Superior. The downside found out, however, in the IIHS crash tests was despite the optional high intensity discharge headlamps provided in the Santa Fe’s Tech package allow for mostly good visibility in low and high beams and do not make glare for the oncoming cars, the standard halogen headlamp units have been rated Poor as they don’t provide sufficient visibility on straight line and curves while creating excessive glare.