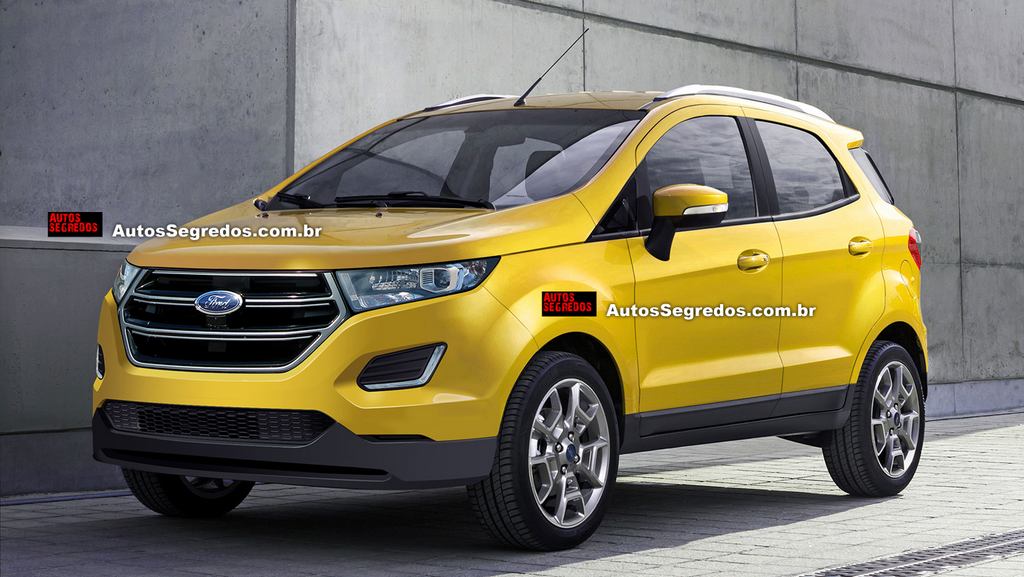 Ford EcoSport has been a pretty popular model from the American automaker in Indian market. The muscular looking car comes with a strong road presence, and for the beefy design Indian people love this car, which led it to be one of the best selling models in the country. Now the Argentine automotive publication AutoBlog has rendered the 2017 Ford EcoSport based on the spyshots. The 2017 EcoSport would hit the Indian shores in the first half of next year alongside the South American Market.

The new Ford EcoSport looks more beefy with the facelift. The rendered image suggests it would get design clues from the Ford Edge. The front fascia has been redesigned with new headlamps and fog lamp clusters. The usual hexagonal front grille has been revised which will get chrome garnishing. The overall front fascia looks more aggressive in the facelift Ford EcoSport compare to the outgoing model. The car would sport LED taillights, new cover for the spare wheel mounted at the tailgate. In Europe Ford sells the EcoSport S which is sold sans the mounted spare wheel at the rear, but in India and South America the EcoSport will continue with the spare wheel in the facelift model as well.

In the leaked spyshots we have already seen the glimpse of the interior of the upcoming facelift Ford EcoSport. The dashboard has been heavily redesigned, and honestly; the interior looks cool. The 2017 Ford EcoSport will come featuring a new design multifunction steering wheel, a larger instrument cluster, completely revised centre console and rectangular AC vents. The centre console will sport an all new music system with a colour screen.

Power source for the 2017 Ford EcoSport is expected to remain unchanged. Therefore on the petrol segment the car will come with a 1.0 litre turbocharged three cylinder Ecoboost engine, which is pretty popular, while the other engine will be a 1.5 litre four cylinder Ti-VCT engine. Transmission duty will be done by a 5 speed manual gearbox or a 6 speed Powershift dual clutch automatic as option. On the diesel front the 2017 EcoSport’s power source will be the same 1.5 litre TDCi engine mated to a 5 speed manual gearbox, churning out 100 PS of peak power and 205 Nm of peak torque. The petrol engine has been tweaked last year to produce 9 PS extra power and 1 Nm extra torque.