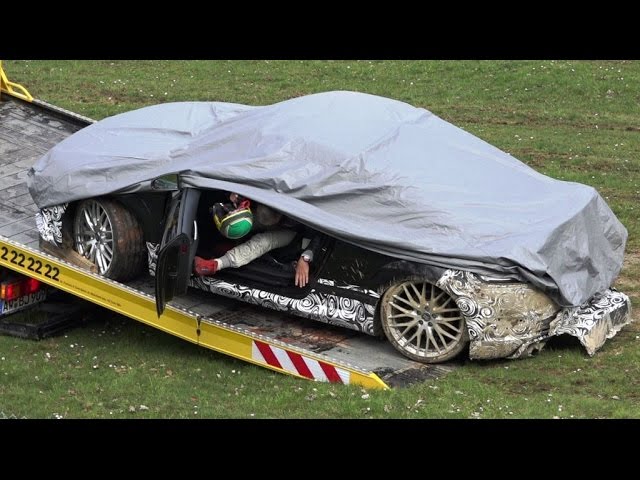 Nürburgring in Germany is known as one of the most challenging race tracks in the world. In past many cars couldn’t reach the ultimate point of success while being tested on the track which is also known as the “Green Hell”. As it seems, another inclusion just increased the number in that list, and the latest one is a 2017 Audi TT RS test mule, which was getting tested there, and crashed eventually into the guardrail.

A video recently popped up on internet, which shows the vehicle beside the track after the crash. Although the moment of crash wasn’t caught in that video, but two test driver is seen pulling a tarp and covering the car quickly. The footage also shows that the damaged Audi is being loaded on a flatbed truck and taken away for further inspections. The car had damages at both the front and rear ends. The rear diffuser is seen damaged. While the damaged car was being covered and loaded onto the flatbed truck, there was another test mule of the same car.

Expect the 2017 Audi TT RS to come powered by a 2.5 litre five cylinder engine, which would be paired with either a manual transmission or a dual clutch automatic gearbox, and it will churn out around 400 hp of peak power.

The new TT RS will take the design cues from the third generation normal variant of TT. It will therefore sport a sharp front grille, restyled headlamps and front bumper. The horizontal slats might get replaced by honeycomb pattern mesh grille as seen in the recent high performing Audis. The air intake might get larger, and it might sport silver slat with vertically placed fins at both sides. The fenders, wheels and side skirts will also don new style. The rear bumper will also don a revamped appearance with an integrated diffuser and a spoiler atop the boot lid. Expect the car to be unveiled officially later this year.