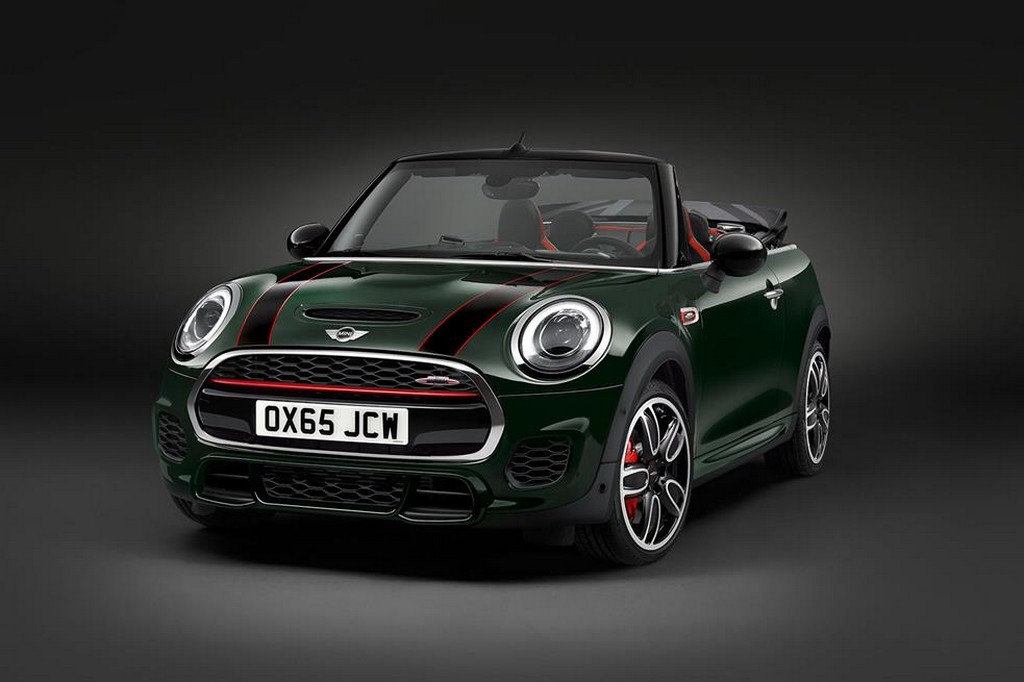 The newest-generation of the Mini John Cooper Works Convertible has been unveiled ahead of its world premiere at the 2016 New York Motor Show in a little over two months time in March. Codenamed as B48 by Mini, the JCW drop-top employs a similar engine to that of the hatchback version introduced in the international markets last year.

The 2.0-litre tubrocharged petrol engine develops 228 bhp of power and 236 lb-ft of peak torque. These are a significant rise in figures as the 1.6-litre turbo petrol in its predecessor generates 20bhp and 44lb ft less comparatively and the standard Cooper S Convertible pumps out only 191 bhp and 206 lb-ft of torque. In a similar fashion to its hard-top sibling, customers have two transmission to choose from: a standard six-speed manual or an eight-speed automatic gearbox. The ride and handling characteristics are governed by electronic techs like e-diff lock, dynamic traction control and dynamic stability control. The range-topping JCW convertible is claimed by the British manufacturer to hit 100 kmph from standstill in just 6.6 seconds with manual gearbox which is three tenths quicker than the second-gen Cooper Works Convertible and two tenths faster than the Cooper S Convertible despite the added weight. The eight-speed automatic optional transmission can get the new Mini from 0-100 kmph a tenth quicker than the manual model with a rated top speed of 150 mph(240 kmph). The performance-based convertible gets beefier Brembo brakes and sits on a standard 17-inch alloy wheels wrapped around by 205/45 profile tyres whilst 18-inch wheels are offered as an option. As has been the case before, the John Cooper Works Convertible comes boasting with visual exterior modifications to stand out from the regular versions of Mini Cooper. The re-styled front bumper has bigger air dams, eye-catchy signature red touches on the prominent grille, reworked LED headlamps, changes to wheel arch cladding, red Brembo brake callipers, a subtle rear bumper and a pair of chrome tail pipes mounted midway at the rear.

On the inside, the third-generation John Cooper Works Convertible features modified front passengers and driver seats with integrated headrests, stainless steel operation pedals, revised instrument theme and a three-spoke steering wheel with multiple buttons for various functions. The roof on the John Cooper Works Convertible can be opened and closed in just 18 seconds at speeds of up to 31 kmph. It will be sold in the UK from March onwards at a starting price of £26,630 (Rs. 25,67,701).