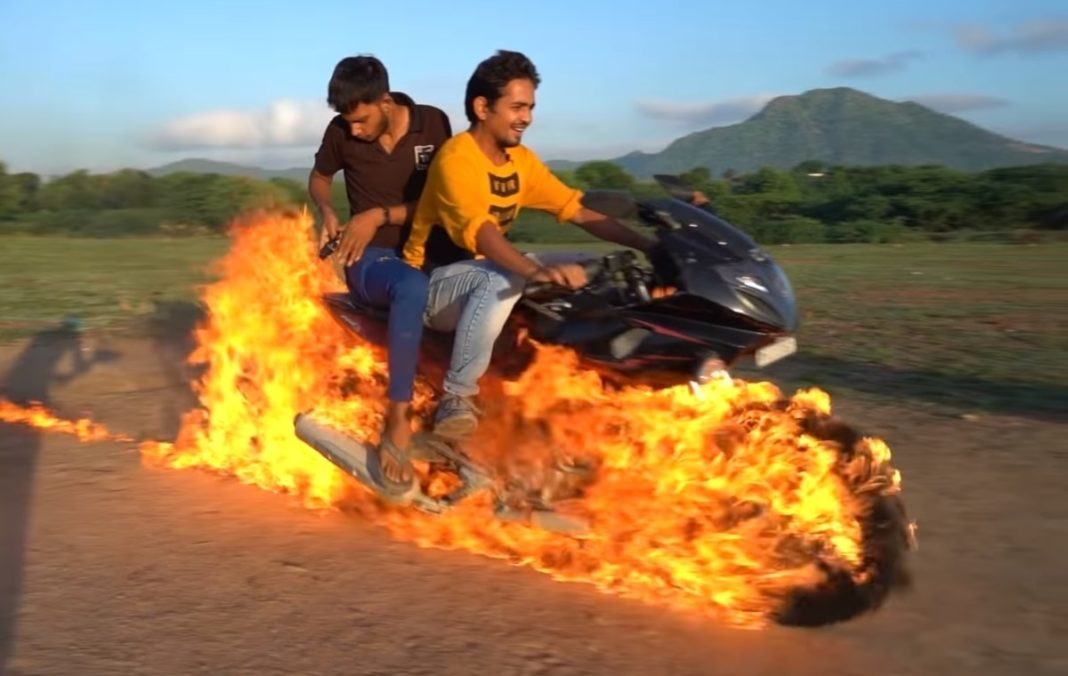 Here, we have a viral video which shows a YouTuber play with fire, which could have resulted in a major catastrophe

The power of the silver screen often compels people to imitate their favourite actors, or sometimes even the stunts they witness. While performing the latter may seem cool, more often than not it is extremely dangerous, and can result in bodily harm. Still, there are a few adrenaline junkies who wish to experience the thrill of such stunts in real life.

Here, have a similar video, uploaded by a YouTube channel named ‘MR. INDIAN HACKER’. The channel’s USP is performing weird experiments, most of which aren’t especially dangerous and are rather entertaining. That said, this video shows some questionable content, which could’ve had potentially bad results.

The video begins with the host explaining to the audience a popular Hollywood movie from 2007, called ‘Ghost Rider’. The titular character of the movie, based on a Marvel comic character, had a burning skeleton for a body and a motorcycle with wheels on fire. Of course, that was CGI trickery, not real fire, as it wouldn’t have been safe for the actors and stunt people involved in the filming.

In this video, however, we see real fire. A Pulsar 220 is prepared for the stunt by having its front and rear fenders removed, along with the rear tyre-hugger. The tyres are then wrapped with a flammable cloth, and then soaked in petrol. After that, the motorcycle starts to move and the wheels catch fire. Within seconds, almost the entire motorcycle is covered in flames, almost uncontrollably.

What’s worse is the fact that the rider and the pillion weren’t wearing any protective gear. Both young men are clothed in T-shirts and jeans, and the pillion had slippers on. After riding for a few metres, both of them ditched the motorcycle and jumped off. There are plenty of ways this could’ve gone wrong, but thankfully, both the men were unharmed at the end. After a lot of effort, they manage to put out the fire and the motorcycle seemed to have survived as well. 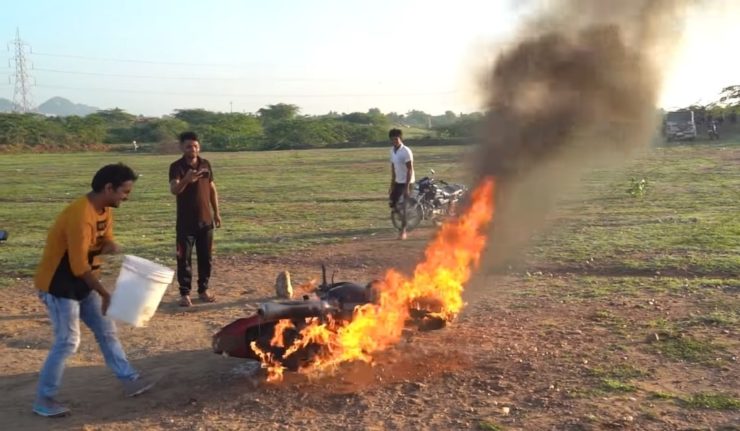 There is a disclaimer in the video which states these stunts shouldn’t be performed without professional help. That said, we can’t help but notice that this particular stunt was NOT performed by professionals. In the video, all we see are a few boys, none of whom seem equipped to fight fire or even prepared for the worst. We strongly discourage risking life just for a viral video.