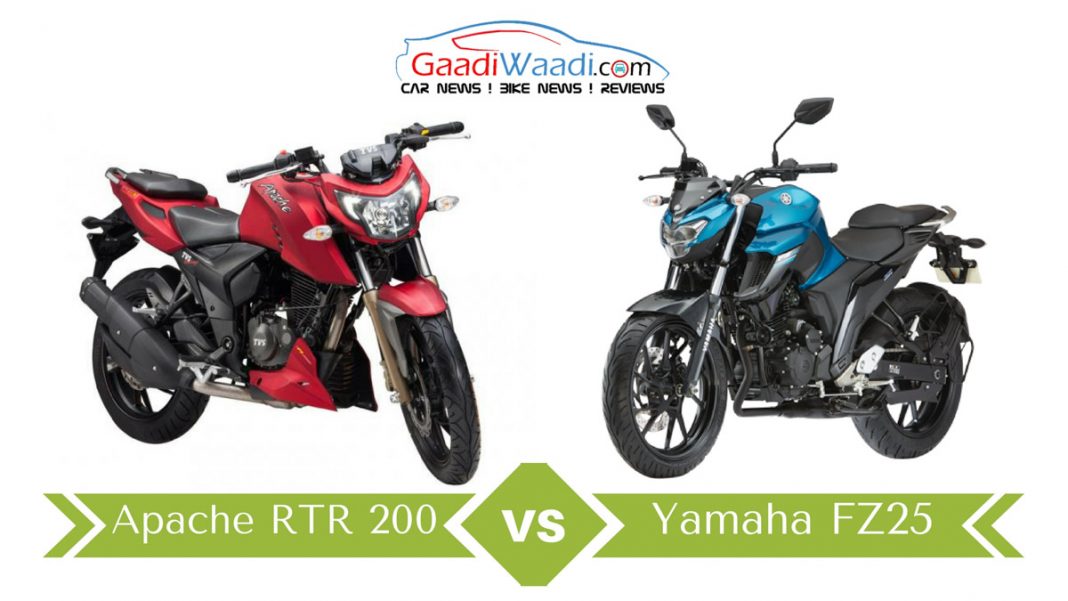 Yamaha has just launched the FZ25 in the Indian market that sits in the 200-250cc segment along with rivals like the TVS Apache RTR 200 4V. The newly introduced bike has been designed keeping the customers in mind who are at their 20s and early 30s. These customers are easily attracted towards the premium bikes with good performance and stylish design.

The all-new Yamaha FZ25 comes with such an appearance that will catch your attention at the first glimpse. The bike looks very aggressive and sporty with its naked streetfighter stance. Yamaha clearly says that this model has been designed to cater those urban young age customers who can use this bike for multipurpose. It can be used for daily commuting in and around the city. With it, the riders can hang out with friends and go for occasional long road trips as well. Overall, the Yamaha FZ25 has a strong road presence. The segment of 200 cc – 250 cc bikes is positioned right under the space of the Bajaj Dominar 400 and KTM Duke 390 in the domestic market and there are many young customers who look for a bike in this segment increasingly. While TVS Motors already launched its Apache RTR 200 4V in the segment last year, now with the arrival of the Yamaha FZ25 the battle gets intensified.

Yamaha says the FZ25 is a perfect step up for the entry-level FZ customers who seek a premium bike. Perhaps, the FZ25 can be claimed as a late entrant to the segment but it has the definitive looks and character. Apache 200 4V, on the other hand, is built with the trademark TVS trust and has all the sporty riding behaviour up its sleeves as major strength. While the FZ25 claims to offer perfect touring as well as cornering performance, the latter might worry the Apache’s segment space.

Yamaha has priced the bike at Rs. 1,19,500 (ex-showroom, New Delhi), while the TVS Apache RTR 200 4V is priced from close to Rs. 90,000 (ex-showroom) for the standard carb variant and it goes up to Rs. 1.06 lakh (ex-showroom) for the FI version and there’s also a Pirelli tyre equipped variant. Considering the performance and equipment, with dual ABS on Apache and just discs on FZ25, full LED AHO on the latter that’s not present on the Apache, the price difference between them is more or less sacrificed. As they are seemingly so closer to each other on paper in everything, here we are excited to take a look at the spec-sheet based comparison between these two sporty bikes: In terms of design and styling, the Yamaha FZ25 looks truly sporty and very aggressive with its naked streetfighter stance. It has been inspired by several of its sibling like the MT-03, M15, FZ25 and FZ16. The bold looking full LED headlamp appears slender and it features the Auto Headlamp On (AHO) technology. The headlamps have been inspired by the M15. Moving to the side profile, the all new FZ25 sports muscular look through the tank scoops, a 14-litre capacity fuel tank with black plastic element on top.

The cruiser comes featuring fully digital LCD display at the instrument cluster, lowered rider seat, stepped up saddle seat, narrow tail section, split grab bar and fully LED taillight. Yamaha claims, that the seat and the overall design have been done keeping the maneuverability in mind. Also, aerodynamic efficiency has been given priority while designing this cruiser.

The fat and muscular exhaust looks like it has been inspired by the MT-10, while there is a touch of the FZ16 as well. The bike has been built on a lightweight chassis to give the rider better control over the machine. Overall, the Yamaha FZ25 looks very appealing from all the corners. Dimensionally, this new FZ measures 2,015 mm in length, 770 mm in width, 1,075 mm in height and it has a wheelbase of 1,360 mm along with the 160 mm of ground clearance. The TVS Apache RTR 200 4V, on the other hand, looks very sporty and aggressive as well. TVS has designed the bike giving it a pure racing inspired look. It comes with sharp and powerful headlamp, a fully digital instrument cluster. The tank scoops and the muscular fuel tank ensure the naked bike appearing with a bold look.

It has been built on a racing origin split cradle chassis. The split seats, split grab rail, narrow and sharp tail section with sleek taillight, dual barrel exhaust are enough to make the TVS Apache RTYR 200 4V pretty attractive. The bike manufacturer has designed this model to make it aerodynamically efficient and easy to handle with lightweight chassis, supple riding position, etc. Both the Yamaha FZ25 and the TVS Apache RTR 200 4V come with attractive and aggressive design. They have been designed keeping the high-performance seeking young motorcycling enthusiast. Therefore, it is really difficult to give one of them higher score than other. Here, the perception of FZ and Apache badges of the potential buyer will be crucial in buying statement.

The Yamaha FZ25 is powered by a 249 cc single-cylinder, air-cooled four-stroke engine that is equipped with the BlueCore technology. This engine is mated to a 5-speed transmission and kicks out 20.9 PS of peak power at 8,000 rpm and 20 Nm of peak torque at 6,000 rpm. The Yamaha FZ25 is claimed to be delivering a fuel efficiency of 43 kmpl. On the other hand, the TVS Apache RTR 200 4V is available in both carburetor and electronic fuel injection versions. The naked sporty bike takes power from a 197.75, single-cylinder, oil-cooled engine that is paired with a 5-speed transmission. The engine is capable to churn out power output between 20.5 PS and 21 Nm at 8,500 rpm depending on carburetor and EFI technology. It pumps out 18.1 Nm of peak torque at 7,000 rpm and returns a fuel efficiency of 41 kmpl.

The TVS Apache RTR 200 4V is claimed to be capable to reach 60 kmph from nothing in 3.9 seconds and it has a top speed of 127 kmph for the carburetor version. Both the bikes churn out similar power and torque output. The Yamaha model generates little extra torque than the TVS bike, and it also offers little better fuel efficiency as well. But the major performance differentiator is expected to be the air and oil cooled lubrication systems in FZ25 and Apache. Amazingly, despite the bigger engine, the FZ25 weighs as similar to the 200 4V at 148 kgs and it will play a vital role in the handling dynamics. The newly launched Yamaha FZ25 comes equipped with a 282 front disc brake and a 220 mm rear disc brake. But it doesn’t get ABS which is becoming a popular and essential safety measure. Even there is no optional ABS as well. Suspension duty is done by a telescopic front fork and a rear monoshock. It runs on 17-inch black alloy wheels that have been borrowed from its bigger sibling.

The TVS Apache RTR 200 4V on the other hand is equipped with a 270 mm front disc brake and 240 mm rear disc brake combined with dual channel ABS with RPL control. Suspension duty is done by telescopic front fork and rear monoshock. Despite the smaller front disc, Apache offers dual ABS and Pirelli rubber which would put it at an obvious advantage over the FZ25 for the betterment of handling abilities.

Both the Yamaha FZ25 and the TVS Apache RTR 200 4V come with stylish and appealing design blended with top-notch technology. The Yamaha FZ25 looks bit more aggressive compared to the TVS model and has a cruiser stance rather than an outright performer. They have been designed keeping the young buyers who seek premiumness, style, power, high performance and affordable pricing as well – all in one single package.

In terms of power and performance, these bikes are so closer to each other as well. However, the FZ25 delivers little extra torque along with better fuel efficiency. Moreover, it misses out on a very important safety feature like ABS that is available in the TVS Apache RTR 200 4V as option. This certainly puts the odds in favour of the TVS Apache RTR 200 4V but then again the FZ25 has full LED lights up front and rear and comes incorporated with AHO tech.

Due to government regulations, the Apache should soon get the AHO feature though. It’s hard to pick a winner here as the Apache and FZ monikers are highly popular among youngsters. The flagship naked Apache is known as a supreme handling machine with all the power usable on the daily roads due to its shorter and smoother gearing.

If the FZ25 can cope with that in riding and performance departments, we are in for a titanic tussle in sales. Personally, I would think the cruising ability of FZ25 will help the cause of the little extra pricing. Putting the upcoming NS200 in the mix, we are in for a stunning 2017 and cannot wait to take them all out for a spin and tell you which behaves the best when it matters!