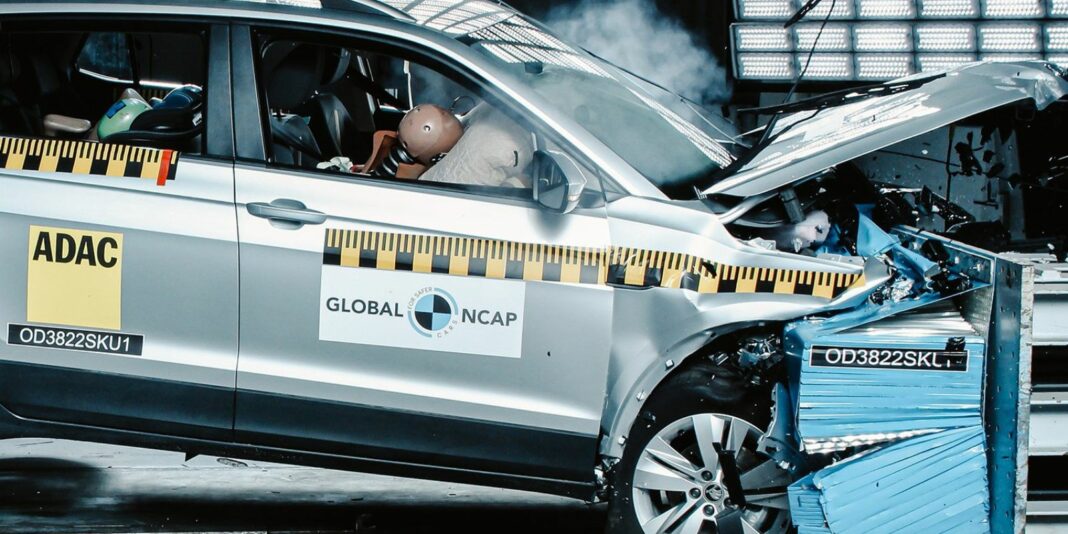 Volkswagen Taigun and Skoda Kushaq have secured full five-star marks in the Global NCAP’s updated crash tests as they have become the first ones to do so. The more demanding crash test requirements for India saw the midsize SUVs that were launched under the India 2.0 revival project score top rankings in the adult and child occupant safety tests.

The five-seaters are based on the same MQB A0 IN architecture developed specifically for India and they are rolled out of the same manufacturing unit in Chakan near Pune. With five stars, they have become the first models ever to do so for both categories of crash tests. So, what is the updated protocol for Global NCAP and why does it matter?

It assesses frontal and side impact protection for all tested models while the Electronic Stability Control (ESC), pedestrian protection and side impact pole protection assessments are also required for vehicles scoring the highest star ratings, and ultimately it is the safest the independent crash test organisation has devised.

The base variants of the Volkswagen Taigun and Skoda Kushaq were tested by Global NCAP and they are fitted with Electronic Stability Program as standard. Global NCAP said that the SUVs have demonstrated a stable structure in the frontal impact, adequate to good protection for adult occupants, and marginal to good protection in the side impact scenarios.

The prototypes have also received full protection during the front and side impact related to child occupant protection. Global NCAP has acted as a catalyst to dramatically transform the safety of passenger cars in the Indian automotive industry since 2014. The arrival of the safer cars for India campaign has stimulated a big change.

From testing a large number of cars in 2014 with a zero Global NCAP rating, it is encouraging to see many locally made cars sold with four- or five-star marks as recognition of improved safety standards. Even in the sub Rs. 10 lakh category, we have many five star rated cars such as Tata Nexon, Tata Punch, and Mahindra XUV300.