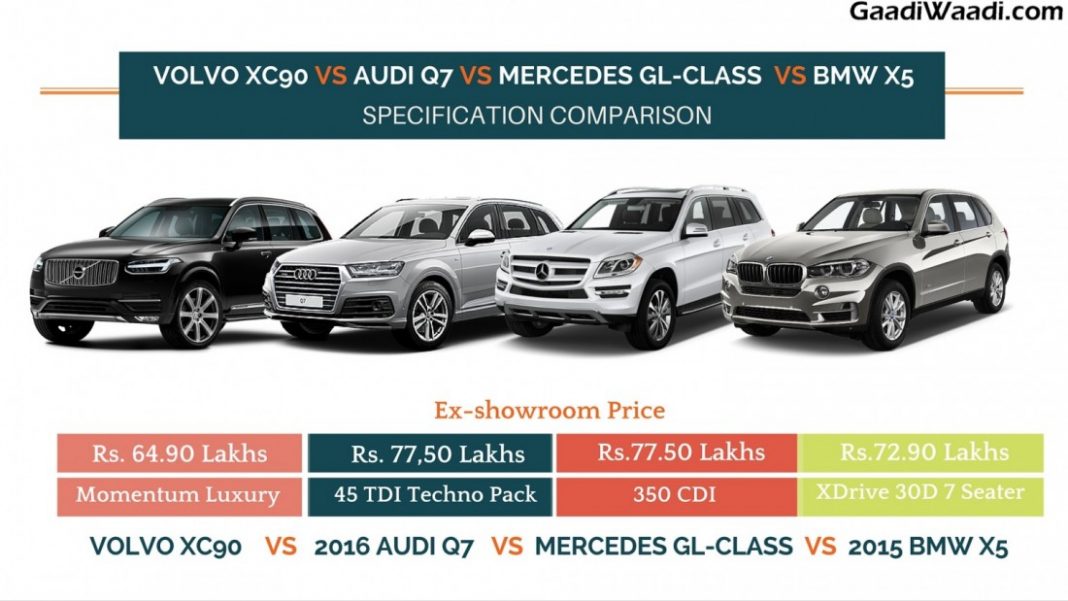 The 2016 Audi Q7 launched in India recently and it is being sold initially through CBU route at a starting price of Rs. 72 lakh(ex-showroom Delhi) for Premium Plus variant and Rs. 77.50 lakh for the Premium Technology variant. The flagship luxury SUV from Audi has a sharp new styling, improved interiors and was built on a lighter MLB platform with a revised engine to boost performance.

Traditionally it rivals against the other big guns Mercedes GL-Class, BMW X5 and Volvo XC90 and we have come up with a comparison chart to give you a clear-cut idea of who’s bettered the other: The 2016 Audi Q7 has a single-piece hexagonal grille with brushed aluminum surrounds up front. On each side, the sleeker horizontal headlamps shelters the arrow-shaped Matrix LED DRLs. The luxury family SUV looks sharper from every angle at the front with all-new bumpers and prominent bonnet lines. The side profile has very strict character lines that run straight to the rear. At the back, the neat rectangular LED tail lamps are redesigned to suit the neat front end and the round-shaped exhausts have been replaced by trapezoidal tail pipes. Derived from the Volvo Coupe Concept, the front of XC90 gets a prominent chrome grille flanked by the ‘Thor’s hammer’ headlamps. It has strong shoulder lines and at the rear a vertically stacked tail lamp design.

Visually all the four chunky SUVs look stunning with the Audi having a clean yet sturdy profile. The right-in-your-face Mercedes GL-Class has that standout appeal if I had to narrow down my choice to one whilst Volvo XC90 looks futuristic and the BMW a bit meaner in appearance of them all. The new Q7 has revised dashboard with standalone MMI on top, four-zone climate control, configurable instrument console display, new gear levers and improved infotainment system with 3D surround sound. The front and middle row of seats will now be 21mm more roomier but GL has the longest wheelbase in comparison to intentionally offer the best cabin space in the segment.

But the interior styling in the Audi is too plain when compared to its competitors. Volvo comes out on top in terms of the award-winning futuristic dashboard and innovative displays with the Merc and BMW following the Swedish SUV so close. The Mercedes GL-Class will offer nine airbags in the base variant whilst the Audi and BMW will come with eight each. Tyre Pressure monitoring system is provided as standard in all the four models across their different variants. ABS. EDB, Brake Assist, ESP, Hill Hold Control, Traction Control and Torque on-demand four wheel drive system are also given as standard.

Only the Volvo and Audi have Cabin-Boot Access but the latter doesn’t comprise leather-wrapped gear-knob. Of the four, only the Swedish SUV has dual-tone interiors, chrome inserts on rub-strips, electrically-adjustable headrests and front-only ventilated seats as primary accessories but it offers painted interior door handles rather than chrome-finished on other three SUVs.

Active cornering headlights are available only in XC90 and X5. The Mercedes and BMW have xenon projector headlamps while the Audi and Volvo are equipped with LED head and tail lamps. The Volvo XC90 provides front and rear fog lamps – the Audi Q7 has it only at the front – alongside multi-functional display and digital instrument cluster unlike the analog displays in the other models. The new Audi Q7 is 37mm shorter and 15mm narrower than its predecessor. It stands at LxWxH dimension of 5,052×1,968×1,740mm with a 2,994mm wheelbase. The Merc GL is the dimensionally bigger vehicle that enables it to have a bootspace of 680 litres as the Q7 on the other hand has only 295 litres of room at the boot with XC90 the next least at 530 litres – almost half as much of the Audi. Being the bigger SUV of the lot, the GL has 6.3m turning radius whereas the rest of the vehicles have it almost similar. The Q7 has 75 litres of fuel tank capacity – a quarter less than what’s been found in the Mercedes GL and BMW X5 – whilst having the least ground clearance of 200mm. The Volvo XC90 is powered by the smallest engine of the group and thus return a mileage of 17.2kmpl while being least powerful at 225PS. Other three SUVs have 3,000cc six cylinder engines and of which the X5 gives out an impressive mileage of 15.4kmpl and a claimed 14.75kmpl for the Q7 alongside generating 245PS of power. The Audi Q7 is built on the lighter MLB platform and sheds 325kg to its preceding model whilst pumping out 245PS and 600Nm – almost as same as the segment-topping GL Class. Therefore, with significant kerb weight advantage of weighing just over just two tonnes over rivals and higher power, the Q7 has the class-leading top speed of 234kmph and can get from 0-100kmph in 7.1 seconds – just two tenth off the quickest BMW X5.

On paper, the new Audi Q7 has performance figures matching the BMW X5 which is highly impressive but the higher premium could put it under some sort of bother and make customers lean towards the XC90 which provides loads of features even in the base variant and far too cheaper than any of its competitors. The Swedish SUV has dual-tone interiors, digital instrument cluster and front ventilated seats as standard. Active cornering headlights and leather-wrapped gear knob are also offered in the XC90 which is nearly seven lakh cheaper than the Audi Q7 and a whopping 12 lakh dearer than the Mercedes GL-Class.

The Volvo XC90 is highly desirable for Indian roads as it’s the widest car of the lot with the highest ground clearance at 238mm. It’s lightest car of the four by weighing under two tonnes but accommodates for a very generous 530 litres of bootspace – almost twice as much of the Audi. Despite being powered by a 2.0-litre engine, Volvo has been so clever to make it eke out the best-in-class mileage of over 17kmpl and help it attain a top speed of 230kmph.

Although being sold through CBU channel, the Volvo XC90 Momentum Luxury is the least expensive in the segment at Rs. 64.90 lakh and will emerge as the clear winner in our comparison ahead of the ultra-spacious and comfortable Mercedes GL-Class with stunning interiors. The X5 xDrive30d Expedition and Audi Q7 45 TDI Premium Plus are retailed at Rs. 65.9 and Rs. 72 Lakh respectively whilst the Mercedes GL 350 CDI is priced at Rs. 77.5 lakh.