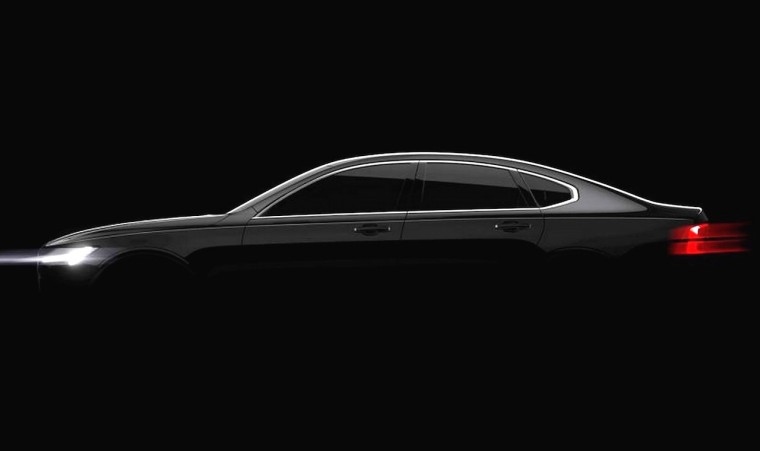 Volvo released two teaser images of its upcoming flagship sedan expected to debut at the Detroit Auto Show in January 2016, the Volvo S90

The 2017 Volvo S90 will be the successor to the aging S80 and the latest teaser images revealed that it’s in coincidence with the design of die-cast scale models leaked in China. With a number of distinct styling elements unseen on any previous Volvo models, the S90 will have a large bolder taillights and sleeker LEDs up front.

It’s been confirmed by the firm’s VP of Product Strategy, Lex Kerssemakers, that 2015 XC90’s success will have a huge influence on the S90 flagship model. Volvo published two images hinting at the car’s exterior and vowed that “more details and specifics” will be coming soon.

The image of the left side profile indicates muscular shoulder line, LED taillights and headlamps with “Thor Hammer” DRLs in complete contrast to the outgoing S80 executive saloon. The second teaser  image takes us closer to the wide-spread taillight design that houses prominent Volvo nameplate on the heavily sculpted bootlid. As for the interior, it could more likely borrow elements from the futuristic Volvo Concept 26 self-driving autonomous car. Built on Volvo’s new modular SPA (Scalable Platform Architecture), the 2017 S90 will have the same powertrain as the XC90 SUV. Initial models will be powered by a twin-charged 2.0-litre inline-four Drive-E engine good to produce 316 horses and 295 lb-ft of torque mated to an 8-speed Aisin automatic transmission whilst four-wheel drive system could come only as an option.

A gasoline-electric hybrid will follow suit as the T8 Twin Engine that generates 394hp and 472 lb-ft. of torque will have plug-in hybrid system onboard to provide an electric driving range of up to 20 miles(32km). Designed to rival against the likes of Audi A6, BMW 5-Series, Jaguar XF and Mercedes-Benz E-Class, the full-scale of S90 range is expected to be revealed by next year before going on sale in 2017.

Additionally, the Swedish manufacturer is working with one of the leading technology providers Microsoft to explore into the possibility of making HoloLens a reality. This project will enable buyers to tap into the exterior and interior of a car with a virtual reality headset depending on the trims and colours being offered without having to deal with flocking to the showrooms.