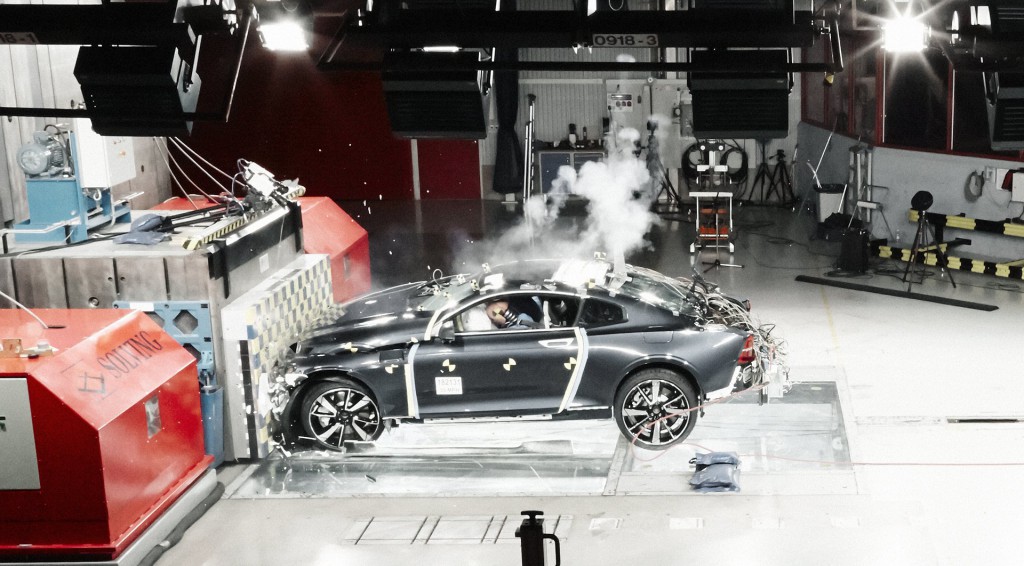 We cannot deny the fact that the Swedish carmaker Volvo builds some of the strongest and safest cars in the world. In the past, we have seen all their production spec cars have passed the safety crash test with flying colors. Recently their latest creation Polestar 1 which is actually a hybrid coupe passed the crash test with the identical result.

So what makes the Polestar 1 different from the rest of the cars? well, the specialty of this car is while the frame has been constructed out of steel the body panels, in particular, are made out of Carbon Fiber. For those of you who are unaware of the fact, Carbon Fiber is an extremely light material but they are highly rigid woven materials.

These particular materials are designed to absorb the impact of the crash and shatter on high impact without leaving any dent. To examine this new concept Volvo engineers tested out a pre-production prototype of the upcoming Polestar 1 hybrid coupe into a barrier at 56 km/h mark.

This crash test replicated a Volvo cars frontal collision at their Safety Centre in Gothenburg, Sweden and the engineers were quite impressed with the overall result of the crash safety test. The material absorbed most of the impacts energy without causing any damage to the metal frame underneath it.

Polestar CEO Thomas Ingenlath said that they were really excited about this particular crash test because they had no idea what could have been the consequence. The crash safety test was a crucial step in the development of Polestar 1 because they also had to know whether the ideas and calculations that have gone behind the car were correct or not.

Now when they are absolutely sure that carbon fiber is equally strong and it also supports highest safety standards they can actually go ahead with the idea of building the body of the Polestar1 with the same material.