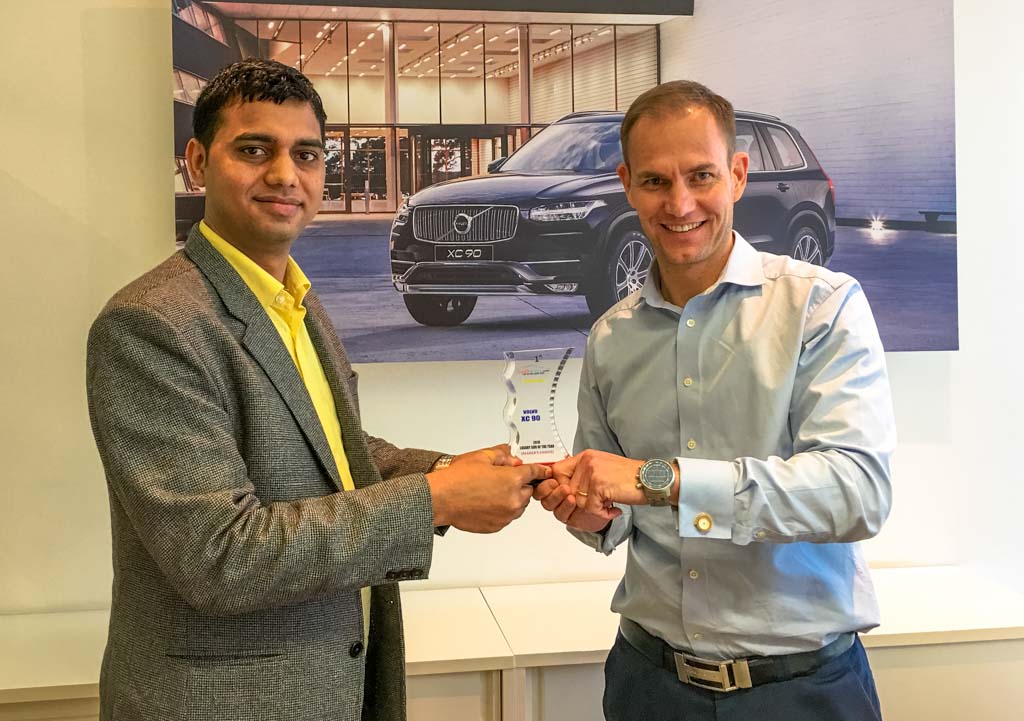 We sat down for an exclusive chat with Managing Director at Volvo Auto India Private Ltd, Tom von Bonsdorff, during our award presentation as Volvo XC90 was chosen by our readers as the Best Luxury SUV of Year in our first edition of GaadiWaadi Reader’s Choice awards.

Here he talked us through the route to attain 10% Indian luxury car market’s share by 2020, new dealerships in three cities, renovating existing outlets, Volvo’s environmental and safety commitments, luxury segment being too small, urge to BS VI emission standards and the relentless push to bring forth sub-2,000 cc engines by 2017 worldwide.

Most importantly, he said to GaadiWaadi.com that the XC90 Excellence, V40 Facelift, S60 Polestar and all-new S90 sedan will be launched during the course of this year while the S60 Cross Country will see the daylight next month on our domestic market.

Read on to know more:

In terms of sales, Volvo has only been the fourth-best luxury car maker in the country. What are your plans to get back up in the Indian market?

Globally we have the target being in the top three, so, of course we have to have the same target here. It’s not going to happen this year though as competition is a bit ahead of us. We want to have 10 percent segment share within 2020 and that means we have to be successful with the product launches, network expansion and does that give us position in top three? Most likely not, so we have to look ahead and that’s the first target we set, a ten percent segment share in 2020.

Does Volvo plans to have any entry-level car positioned below the V40 hatchback in the making, specifically for India?

Not right now. I wouldn’t be expecting that for some time. Globally we don’t have any such products and I’d love to have one of course but I wouldn’t be expecting one right now. With the level of safety equipment we want to put in the car and the fact that we have diesel particle filter standard in all cars, which almost cost a lakh, so the level of equipment especially in safety side anyway will push prices higher. So, I think the current situation where we are now is that a car below 25 lakh is little bit off for now.

You are at the helm of Volvo Auto India’s operations since 1st June 2015 and you have had 17 years of experience in several operational and managerial positions within Volvo. What’s the biggest problem do you face in our Indian market?

I’d love the segment to be much bigger with the amount of money in this country, with the amount of people in this country. It’s amazing that we have grown by 18.5% and sold 1423 premium cars last CY, so first of all in a way we should get better acceptance for premium cars and normally I don’t go for successful competitors. In India it’s like, if other premium brands sell well we also sell, the segment needs to develop and I think people need to understand when you buy a premium car you get safety in the car and I think people won’t appreciate that maybe enough.

The second thing is on the environmental part. When you buy a premium car, in Volvo’s case, you always get diesel particle filter which takes away 99% of diesel particles and we badly need that in the Delhi areas. For another instance, we have the interior air quality system in our cars too.

When you buy into Volvo premium cars you get driving dynamics, safety, environmental concern, clean air inside and so on. I’d hope for, like a, public awareness of what you get when you buy a premium car and which means the premium segment would grow and back to your question problem is the segment is too small. We sell I think 1.7 million premium cars in China every year and there’s much more room for the segment to grown in India and that’s (too small a segment) maybe one issue we have.

Is there any Indian government policy that’s been hindering Volvo?

Yeah! Regulations against radar based safety systems. But that has been now opened up and we can now regularly accommodate our safety technologies across all models.

How would Volvo cope with the sudden shift to BS VI (more or less based on Euro 6) emission regulations which will come into effect from 2020 onwards?

In the environmental part again, all our engines are Euro 6 (comply with top-level European standards) and there’s diesel particle filter in all our cars. We’d hope to speed up moving from BS4 to BS6 and developing fuel for BS 6 as quickly as possible as our cars right now, each one of them, has diesel particle filter and they’re BS6.

So in a way we’d like to hope to improve Delhi air quality quickly. It’s easy for us to say because we are already there so that’s good, strong development on that side so demands (sales) would be as high as possible. We’d hope that, by 2017, all our engines will be sub-2,000 cc worldwide as well.

Few months ago, a video went viral of a guy demonstrating the radar based safety system to his friend in South America. What’s your thought on that?

There wasn’t anything wrong with the car but the car brakes when it needs to brake and when somebody plays around wrongly with the car it is more challenging.

Along with the 16 existing dealerships across the nation, how many shall we expect in addition this year?

I don’t want to commit to a number but we will substantially increase our network this year, that’s one of the focus areas we have to add. So publicly, we are looking for partners in three additional cities Jaipur, Lucknow and Indore. We have some other sites as well but those are the cities we have announced. Of course, we’d do some renovations in existing dealerships as well. We have something called VRE (Volvo Retail Experience) in a similar way to, cold on the outside and warm on the inside, if you like.

That is, Scandinavian very simplistic design approach on the outside and inside we have mix of wooden floor and tile floor and comfortable seating and that’s what we would convert all our showrooms into all over India. We have the products obviously coming the XC90, S90 and all the other products – so that’s’ one thing we want to grow and the other to have network visible in as many places as possible and we really hope to expand dealerships quite a bit this year.