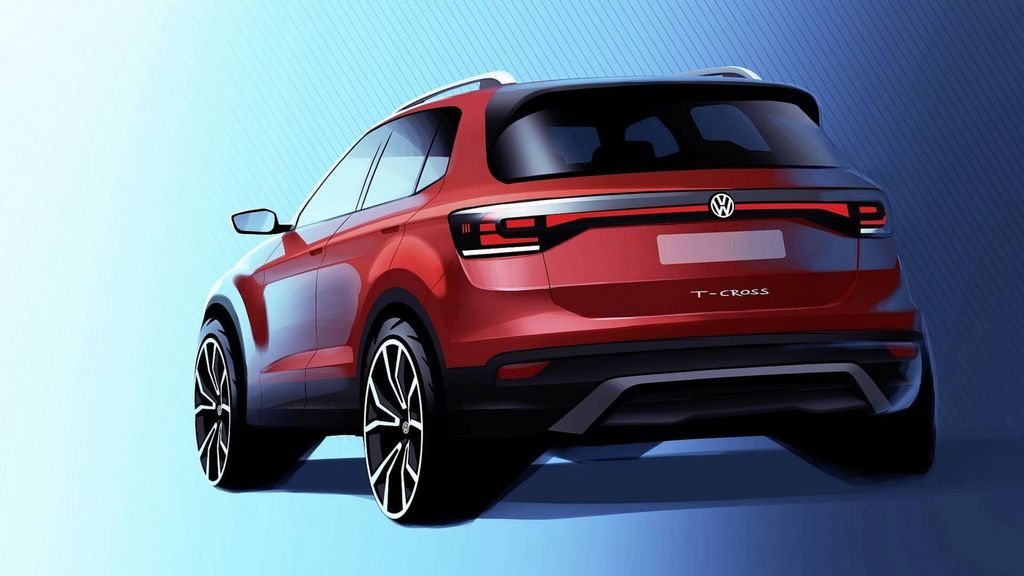 Volkswagen officially revealed T-Cross concept in 2016 and the German manufacturer commenced road testing of the T-Cross earlier this year. Now the company has officially released first design sketch of T-Cross, which is going to be revealed at Frankfurt Motor Show and the market launch will happen by the end of 2018.

The front design of T-Cross is similar to other VW models like Arteon and Touareg as the new CUV get grill which extend to headlamps. The front bumper is simple and long hood gives a muscular look for the T-Cross. The side gets black cladding running across the body with muscular wheel arches for SUV presence.

The most beautiful part of design is rear as it gets smart-looking LED tail lamps and they are connected with a LED strip, which is similar to what we have seen in new generation Audi models. The T-Cross get integrated spoiler and the bumper has reflectors along with skid plates to continue SUV appeal.

Volkswagen hasn’t released interior sketches but it will be similar to new generation Polo as T-Cross comes with touch screen infotainment system and digital instrument cluster as an option. We can expect the CUV to be loaded with features like leather seats, sunroof, push-button start, keyless entry, cruise control, alloy wheels and more.

The T-Cross will measure just over 4m in length and the company promises that it will offer good spaces at front and rear. To further increase legroom, rear seats come with a sliding option. The T-Cross will be powered by 1.0 L TSI, 1.4 L TSI and 1.6 L TDI engines from Polo and Fabia. VW might also offer all-wheel drive system with T-Cross.