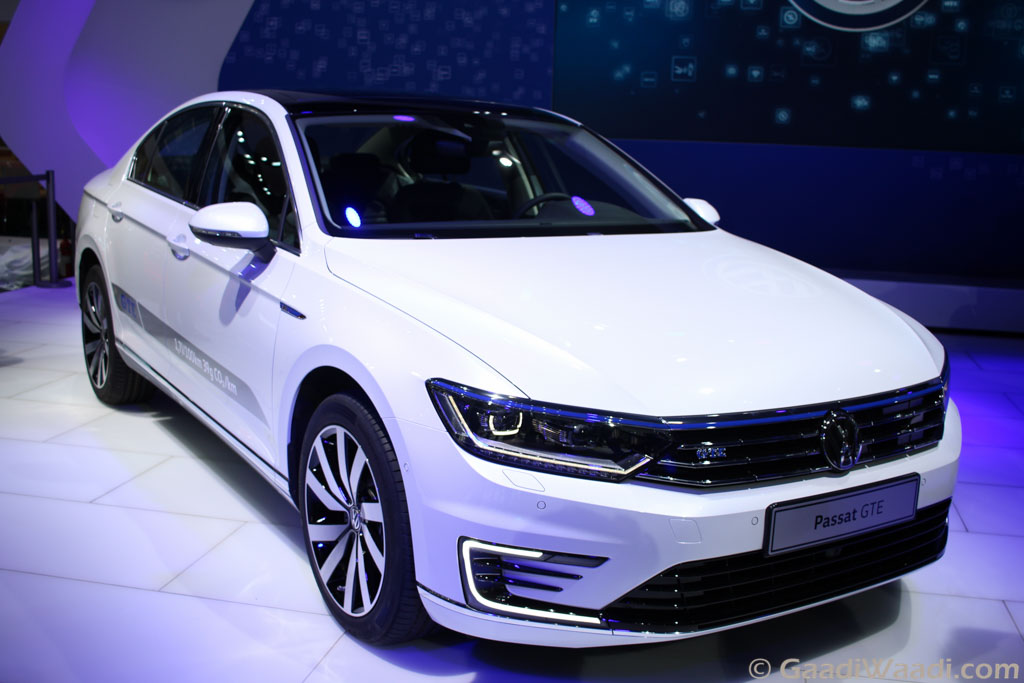 The Passat GTE, unveiled at the Auto Expo 2016, is based on the eight generation Passat premium executive sedan and comes with estate as well as sedan body styles for the overseas markets. It projects a preview into the about-to-be-launched newer gen Passat D-segment sedan in 2016 for the Indian market confirmed the German auto maker.

The Passat GTE is powered by a plug-in hybrid powertrain with a 1.4-litre TSI petrol mill producing 156 PS and a 62 PS electric motor paired with a six-speed dual-clutch automatic gearbox. It provides a driving range of over 1,000 km and can cover over 50 km distance in full-electric mode and thus ensures maximum fuel economy. The Passat GTE can be recognised by a 17-inch “Astana” alloy wheels, chrome radiator grill with an added blue line signifying Volkswagen’s e-mobility colour. The front bumper was restyled and has distinctive cross panels in the bottom section of air dams. There is a presence of C-shaped LED Daytime Running Lights and the integrated models symbolise the signature plug-in hybrid appearance. The Active Info Display will be offered as an option for the Passat GTE plug-in hybrid alongside standard detailing like the specially-made gear shifter, blue ambient lighting, leathered multi-function steering wheel with blue stitching, seats made of Sevilla cloth material with a blue accents all over. Furthermore, the interior has been substantiated by the Waves design giving aluminium look and Piano Black colour scheme with GTE logo in front of the gated gear shifter.