Maruti Suzuki S-Presso will go on sale at the end of this month and it will be powered by a 1.0-litre BSVI petrol engine

Apart from upgrading its domestic portfolio to meet BSVI compliance, Maruti Suzuki India Limited (MSIL) had also introduced some significant products like the Wagon R and XL6 this year. However, the biggest launch from the largest carmaker in the country for 2019 is undoubtedly the S-Presso as Maruti Suzuki seeks to make a big impact in the largely unexplored micro SUV segment.

Scheduled to go on sale on September 30 to capitalise on the festive season furore that generally exists despite the massive setbacks the industry is facing in recent times, the S-Presso has now been leaked way ahead of its debut giving us almost all details we need to know about the soon-arriving model.

The undisguised pictures fix the missing pieces in the puzzle as Maruti Suzuki snubbed its conventional design and approached a new direction altogether. The styling of the Concept Future S, revealed at the 2018 Auto Expo, was thought to preview the S-Presso but it did not turn out to be the case.

Despite carrying a new front fascia compared to other entry-level models within Maruti Suzuki’s domestic lineup, the S-Presso is not too quirky or sporty in its appearance as the concept. Apparently, the resemblances to the concept end with the high-set bonnet, tall pillars and an upright front fascia along with the orange paint scheme.

The Maruti Suzuki S-Presso adorns four U-shaped chrome elements flanking the Suzuki badge and they lead into not too expressive headlamps. Other notable design features include horizontal LED Daytime Running Lights placed below the headlamps and they could only be offered in the high-spec variants. The tall stance is ensured by the black finished front and rear bumper while the squared wheel arches further enhance its character. 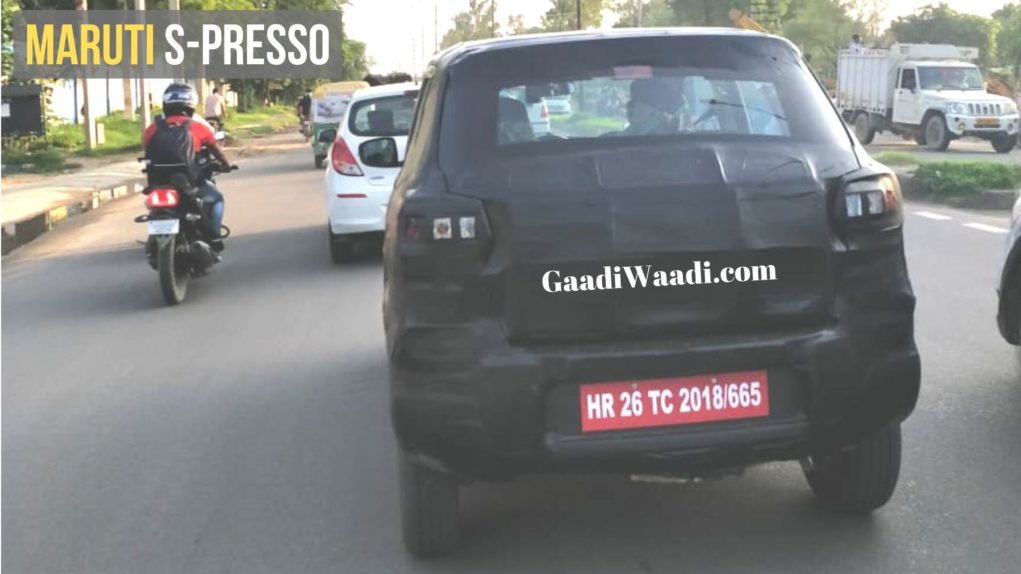 Maruti Suzuki could offer alloy wheels in the high-end grades while the B-pillars are done up in black and the rear door handle is positioned traditionally. The body cladding on the sides reminds us of its part SUV-ish nature. The turn signals are mounted just above the front fenders and the spy picture denotes the existence of steel wheels. The rear end possesses horizontal tail lamps.

The S-Presso is longer and has more wheelbase than the Alto. It measures 3,565 mm in length and has a height of 1,565 mm. The interior is said to have a dark grey theme with colour coordinated elements. The circular digital speedometer seen in the previous spy pictures replicates that of the concept and there will be a SmartPlay touchscreen infotainment system with Apple CarPlay and Android Auto connectivity as in the latest Wagon R.

It will likely be powered by the 1.0-litre three-cylinder K10B petrol engine developing 68 horsepower and 90 Nm of peak torque and it will be mated to either a five-speed manual or a five-speed AGS (AMT) transmission. The powertrain will be BSVI compliant upon arrival while dual front airbags, ABS with EBD, reverse parking sensors, front seatbelt reminder and speed warning system will be standard.

The S-Presso will reportedly be offered in four variants and it will be retailed through the regular Arena dealerships. Expect the pricing of the S-Presso to start from Rs. 4.5 lakh (ex-showroom) and it will compete against Renault Kwid and Mahindra KUV100 among others.