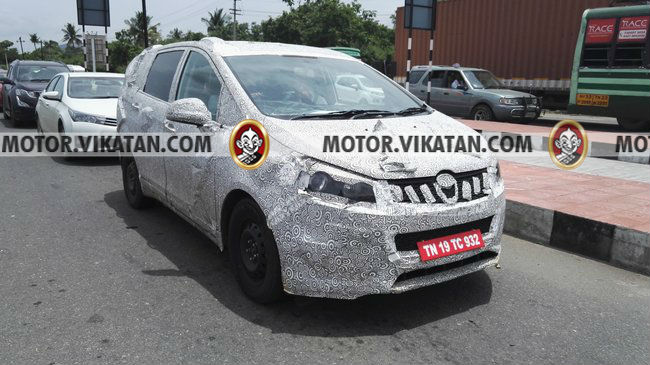 The new clear pictures of the Mahindra MPV have emerged online courtesy of Tamil auto publication, Motor Vikatan. The test mule wearing heavy camouflage was caught testing on the Salem-Bangalore highway and it gives us some of the indications of how the final product could possibly look like. We were the first to reveal the existence of the new MPV and here are some more pictures.

The Mahindra MPV could go up against the likes of recently launched Toyota Innova Crysta as a direct rival in the premium segment and could be offered in both seven and eight seat configurations. The largest SUV manufacturer in the country is said to target market share largel acquired by the Maruti Suzuki Ertiga. It will be a key product for Mahindra’s exports as well as the demands for MPVs are soaring of late in foreign markets. Some reports suggest it is the inaugural project developed by MNATC (Mahindra North American Technical Centre) in Michigan. It is more likely to bear the TUV500 nomenclature and act as replacement for the unsuccessful Xylo. It could be built with a rigid platform developed in conjunction with Mahindra’s Korean subsidiary SsangYong and thus a monocoque construction is likely. The MPV is believed to have standard two-wheel drive system while the range-topping variants could see power being sent to all four wheels.

The power source could be from the XUV500 with the 2.2-litre diesel motor making 140 bhp and 330 Nm of torque. The six-speed manual and six-speed automatic gearboxes are expected to do transmission duties. The 1.99-litre m-Hawk diesel producing 140 bhp and 320 Nm could be the other diesel option likely to be adopted by Mahindra.