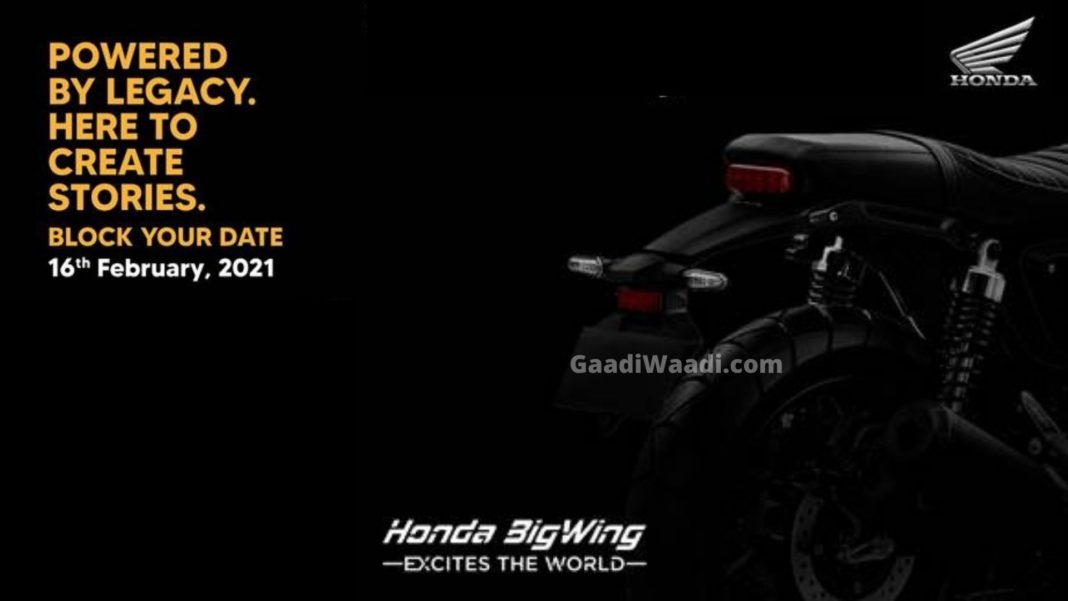 The upcoming 350 cc motorcycle will share its underpinnings with the H’ness CB350, and is expected to be priced around Rs 2.20 lakh (ex-showroom)

We recently reported about Honda Motorcycle & Scooter India’s plans of introducing a brand-new motorcycle in the country based on its H’ness CB350. The H’ness has received an overwhelming response in India so far, and the Japanese carmaker aims to make use of its popularity to introduce another motorcycle based on the same platform.

Honda teased the motorcycle’s rear section a few days back, and till now, we have expected it to be either a scrambler or a cafe racer. However, new speculations suggest that it will likely be the latter. Now, Honda has revealed another teaser, and also launched a dedicated web-page on the official BigWing website.

Taking a closer look at the teaser on the website reveals that the CB350RS is seen multiple times in the site’s coding as well as in the URL. However, it is yet to be seen if it will be christened as CB350 RS, CB350RS or if any other iteration is chosen. That will be revealed on February 16, when Honda launches the motorcycle in the country.

The upcoming Honda bike could be priced around Rs 2.40 lakh (ex-showroom), and is expected to have plenty in common with the H’ness CB350. The motorcycle will likely use the same telescopic front forks and hydraulic twin rear shocks, front and rear disc brakes with a dual-channel ABS system, slipper clutch and so on. Other features that will likely be offered with the new cafe racer include all LED lighting as well as an LCD instrument cluster.

The CB350 RS is expected to be equipped with clip-on handlebars for sportier handling characteristics, silver rear view mirrors, black fork gaiters, new single-piece seat setup with a vintage cowl, silver-coloured front and rear fenders etc. It should be noted that the upcoming motorcycle will also be retailed through the premium BigWing dealership, just like the H’ness.