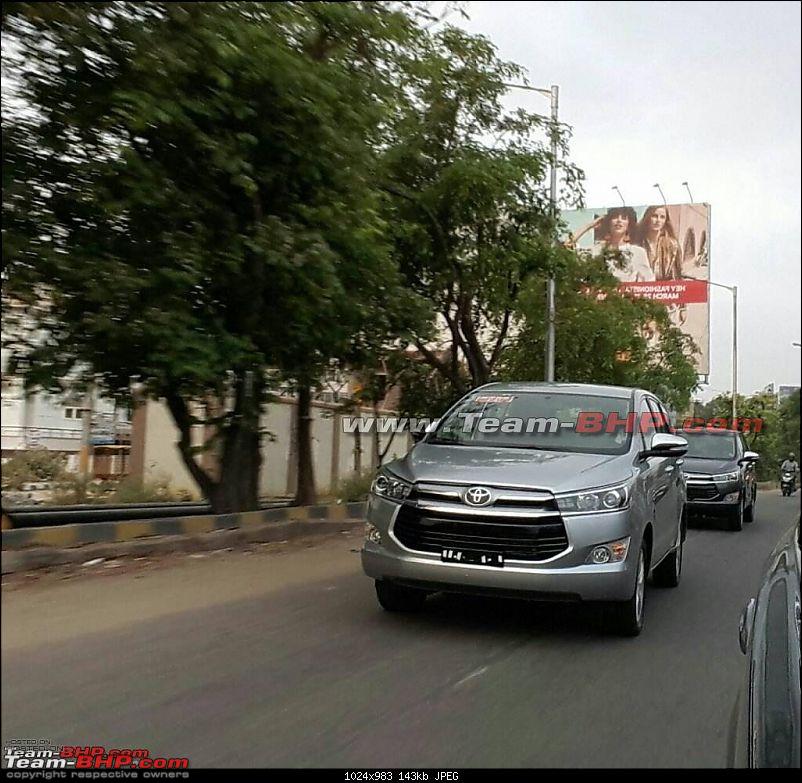 Toyota Innova is the most popular and best sold MPV of Indian automobile market. Toyota Kirloskar Motors showcased the new Innova dubbed as Innova Crysta at the Auto Expo 2016 last month. The new Innova Crysta has been spotted several times testing on roads. Recently two undisguised Innova Crysta was spotted in open, which indicates the launch is imminent. Overall, the car sports a muscular appearance, which is very appealing. Dimensionally, Toyota Innova Crysta gets a length of 4735 mm, 1830 mm of width, 1795 mm of height and a wheelbase of 2750 mm. It comes 150 mm longer than the previous version, while the width and height has been increased by 70 mm and 35 mm respectively. The wheelbase remains same although. Inside the cabin Toyota Innova Crysta gets features like multifunction steering wheel, stylish instrument cluster, 7.0 inch touchscreen infotainment screen at the upmarket centre console, LED ambient lighting, rear AC vents. The second row gets captain seats. It offers a spacious interior to the occupants for comfortable journey. Power source for Toyota Innova Crysta is a 2.0 litre VVT-I petrol engine producing 139 PS peak power and around 183 Nm peak torque. The diesel variant will get a 2.4 litre GD engine which will kick out 149 PS peak power and 368 Nm peak torque. Toyota Kirloskar Motors showcased a 2.8 litre GD diesel variant at the Auto Expo 2016, which churns out 177 PS peak power and 450 Nm of peak torque. Transmission duty is done by a five speed manual gearbox and there will be a six speed automatic gearbox as well, which will come with sequential shift and cruise control. Innova Crysta will be launched in total four variants. Expect the price to be around Rs. 15 lakh.