Gaadiwaadi.com – Latest Car & Bike News
Home Everything Else The Ultimate Drag Race: Tesla vs F1 Car vs Superbike vs Jet... 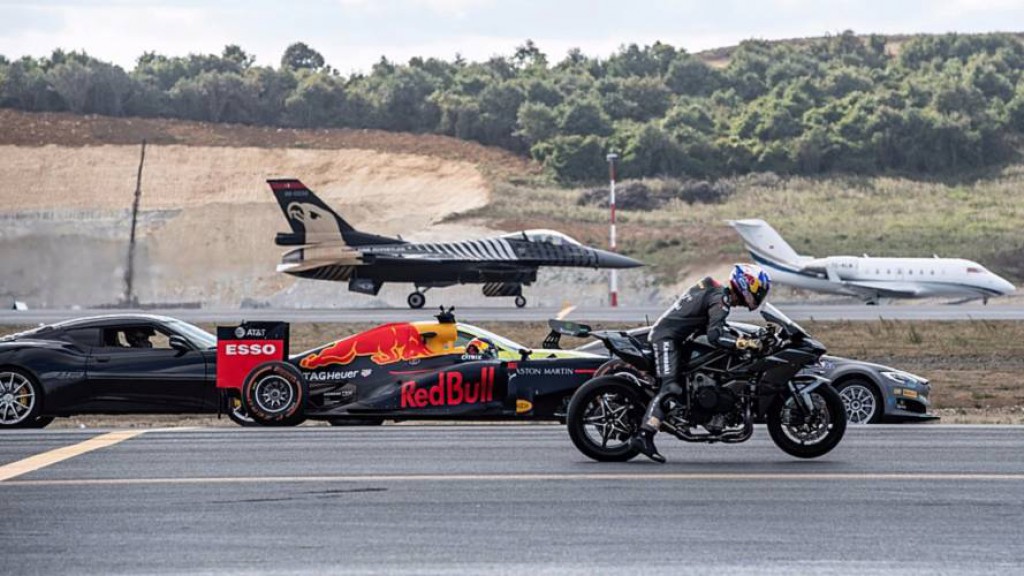 Tesla P100D is one of the most popular cars in drag racing videos and in most of them, the Tesla has won easily thanks to its instant power delivery from electric motors. But this drag video is different because of the participants as it consists of a fighter jet, passenger aircraft, formula 1 car, Kawasaki Ninja H2 and a couple of sports cars.

This mega drag race took place on a runway at the new airport in Istanbul, Turkey. But the video doesn’t show the race clearly and at the end, the Ninja H2 edged out Formula 1 car by 0.4 sec. In one shot, we can see that Formula 1 car is struggling for traction and spinning its rear wheels, then it gets going after aerodynamic downforce kicks in as it doesn’t work in low speeds.

Both these aircraft are not taking off, so speed will be considerably lower compared to other rivals and a fighter jet can easily accelerate faster than any of them. The Tesla was quick off the line, which was expected but it couldn’t hold on against Formula 1 car and the superbike.

The video doesn’t give more details about the supercars that were part of the drag race and whether it’s a quarter mile or a half mile drag race. The Ninja H2 was ridden by former Supersport world champion Kenan Sofuoglu and the Red Bull Racing Formula 1 car looks like a 2015 season car.

The Model S P100D is powered by two electric motors at front and rear wheels with a combined output of more than 700 hp. Tesla has given a 100 kWh battery pack and it comes with fast charging capabilities also and the claimed range of P100D is 507 km. The performance numbers are mind-blowing as 0-100 kmph in just 2.7 sec and electronically limited top speed is 250 kmph.