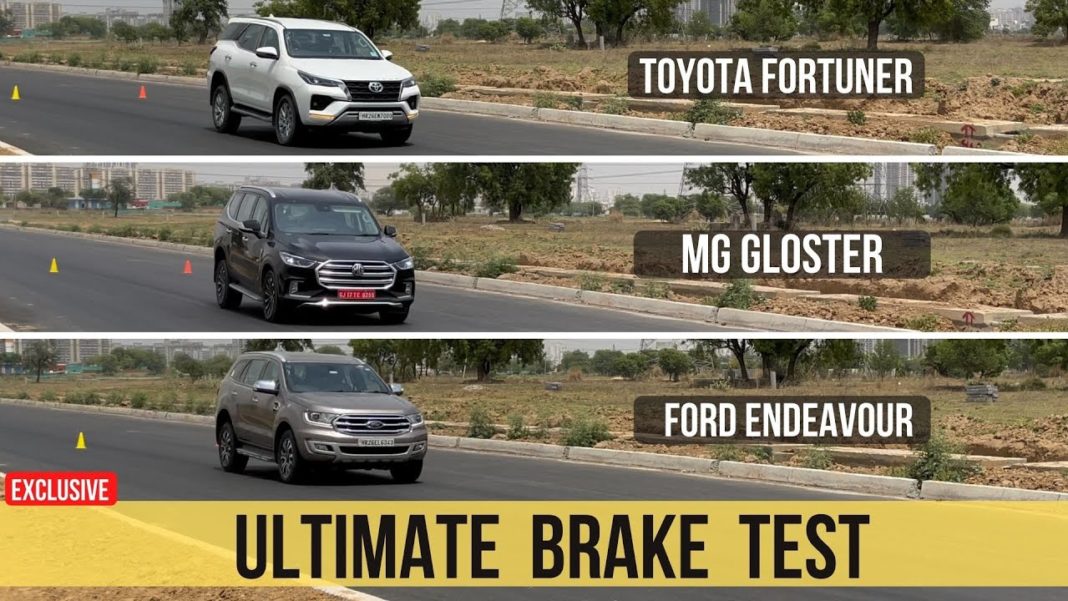 In the latest series of tests, we pitted the 2021 Toyota Fortuner against the MG Gloster and the Ford Endeavour to find out which has the best braking system

The full-size SUV segment is one of the hotly contested in the domestic market with Toyota’s Fortuner leading the pack for a long period of time. The Ford Endeavour has often ended up as the second best-selling model but the arrival of the MG Gloster has spiced up the competition further, and to settle the debate we have been conduction a number of tests.

Head over to our Youtube channel to find out all the interesting tests we have conducted between these three full-size SUVs as there could be only one winner. Here we have the brake test between Toyota Fortuner, MG Gloster and Ford Endeavour as our editor pulled the brakes at a specific place at specific speeds to maintain parity and find out which one stops sooner.

The Fortuner received a mid-life facelift earlier this year with a host of exterior and interior changes alongside the addition of new features and technologies. Moreover, the diesel engine got more powerful as the 2.8-litre unit produces 204 PS maximum power and 500 Nm of peak torque. In addition, the Japanese manufacturer introduced the Legender variant in a single fully-loaded trim.

The seven-seater can also be had with a 2.7-litre petrol engine. The 2021 Toyota Fortuner is currently priced between Rs. 30.34 lakh and Rs. 37.79 lakh (all prices, ex-showroom) while the Ford Endeavour costs Rs. 30 lakh for the base variant and it goes all the way up to Rs. 35.46 lakh (ex-showroom) for the range-topping model.

The American SUV is sold in Titanium Plus and Sport grades and is powered by a 2.0-litre four-cylinder EcoBlue diesel engine developing a maximum power output of 168 bhp at 3,500 rpm and 420 Nm of peak torque at 2,000 rpm. It is linked with a ten-speed AT. The MG Gloster, on the other hand, is priced between Rs. 29.97 lakh and Rs. 35.59 lakh (ex-showroom).

It is offered with a single 2.0-litre diesel engine in two states of tune. The single turbo version makes 163 bhp and 375 Nm in the Super and Smart trims while the twin-turbocharged unit kicks out 218 bhp and 480 Nm in Sharp and Savvy trims. It is hooked with an eight-speed torque converter automatic transmission.