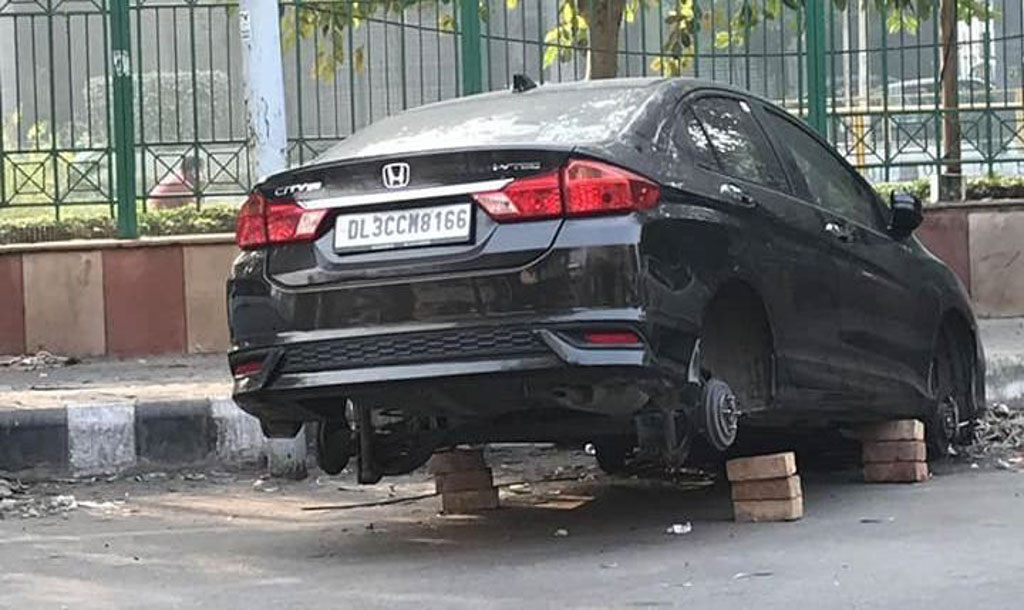 Delhi, the national capital of India also has one of the highest rates of car thefts in the country. However, as the technology is improving and vehicles are becoming much more safer with the use of immobilizers and GPS tracking systems, thieves are becoming innovative too.

Residents of a society in Delhi woke up to see most of the wheels have been stolen and the body were rested on a tower of bricks. Cars with expensive alloys were targeted like the Honda City and Maruti Ignis. Thieves may have also taken the steel rims but in such cases the vehicles with alloy wheels are targeted.

Thieves generally choose late hours at night to do that job. They first put the vehicle on a jack and then take out the wheels. The vehicles are then lowered on a platform of bricks to take out the lift jack. The whole process does not takes more than 10 mins and it is extremely difficult to detect such thefts if the vehicle is parked at a secluded spot.

Often in cities like Delhi where the parking space is cramped, people park their vehicles at a distance wherever there is a spot available. This makes the vehicles more vulnerable. Parking in dark areas make it worse and make the vehicle easy target. It is always good to find a street light under which the vehicle can be parked overnight.

But do you need to worry?
If your vehicle has an expensive set of aftermarket or stock alloy wheels, you sure need to worry as such thefts are becoming common. It is always better to take precautions. There are a few insurance policies that will reimburse for your expensive tyres too.

Some Insurance pays the owner on depreciation basis after checking kilometers on the odometer. Other method is to use specially designed nut bolts. All the mass-segment vehicles come with regular bolts that can be opened by anyone. However, high-end vehicles get a special bolt that can be opened only though uniquely designed tools. 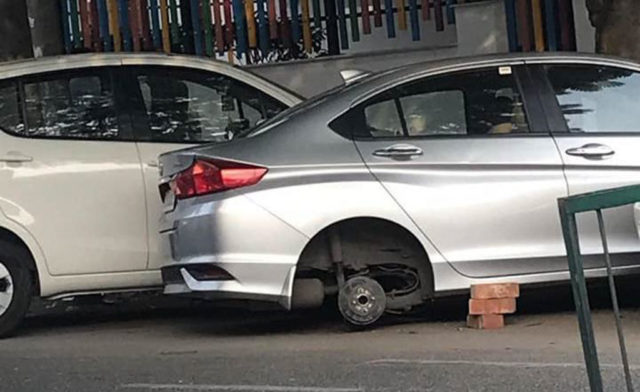 Such bolts are available for the regular vehicles in the aftermarket accessories shop. They have special shapes or designs engraved on the bolts and can be opened only with the specially designed tool that matches the engraving of the bolt. These steps would save you from any such scare in the future.