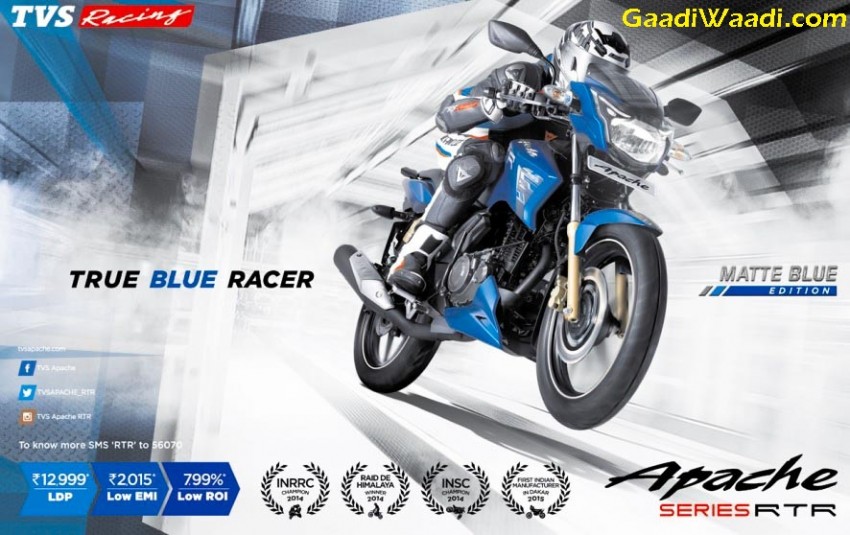 Matte Blue Edition of Apache RTR comes in the160cc variant, RTR 180 could get the same soon

Festive season means manufacturers make sure either they have new products or heavily upgrade their old one’s. Color schemes and graphics are one of the steps manufacturers take in India to keep them fresh and running and providing more options to prospective buyers. Unique options also make things better for customers and hence limited edition is also launched.

TVS have done it with their popular sports bike in the entry level category with the Matte Blue Edition of Apache RTR. It seems to be available with the 160cc variant as of now, but the advert mention on the RTR series. We can expect 180cc variant to come in either blue or matt color type options soon as well.

Matte Blue Edition of Apache RTR has also been spotted at the dealership where it has arrived and ready to be sold out. Cosmetically, the Matte Blue Edition remains the same as it was heavily revised a year back with a large headlight cowl, LED pilot lamp, bikini fairing which improved the aerodynamics by 10%. The rear so minimum changes to the tail-piece, but the stop lamps continue being to the same. Despite the Matte Blue Edition, it will continue to have colors like white, red, yellow, black and grey as it options. Mechanically, the Matte Blue Edition of Apache RTR is the same as it gets dual disc brake setup, adjustable clip on handlebars, the engine on the Matte Blue Edition is the 160cc unit as of now and as we said 180cc is likely to debut as well. The 160cc engine makes 15.2 BHP of power and 13.1 Nm of torque. The carb fed motor is still the most fun to ride unit despite the fact it is not class leading anymore thanks to competition from Suzuki Gixxer and upcoming Honda CB Hornet 160.